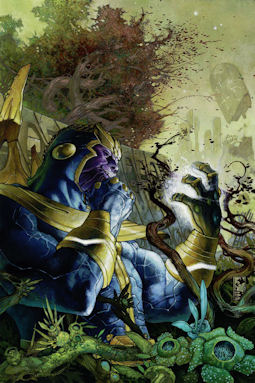 July’s solicitations for Marvel Comics give us our first look at the Marvel Universe after the much hyped, “This will change everything!” conclusion of Age of Ultron.

And it looks like business as usual across the board.  With the exception of the mysterious Age of Ultron #10 U.C., there are no classified covers or blurbs hiding the fallout from Age of Ultron. There just... is no apparent fallout besides the launch of Avengers A.I. and a solicited appearance by Angela in Guardians of the Galaxy. Don’t get me wrong. I’m not declaring the end of Age of Ultron as all hype. I’m just saying don’t look here for hints or signs of what comes after. There really aren’t any to be found.

July sees a four issue What If...? take on Avengers vs. X-Men. You know, I usually like these more in idea than the actual execution. It's rare to get a good story out of them. Usually, they lean towards being thoughtless, predictable and an excuse to kill characters without repercussion. I expect at least one of these issues to annoy the crap out of me by trying to cover for the Avengers' making such a mess of things by showing us it would have been worse if Cyclops got his way, which is lame.

It’s a big month for Nick Spencer. He’s co-writing two issues of Avengers with Jonathan Hickman in July along with writing two issues of his own Secret Avengers. Then on top of that, he’s launching Superior Foes of Spider-Man as a new ongoing in the Spider-Man franchise, which is getting pretty huge in July. Maybe Doc Ock really is a better Spider-Man.

It looks like Winter Soldier has been quietly cancelled in June. There’s no sign of it in the July solicitations. Honestly, I’m starting to think comic publishers should just end these series when their main creator leaves. Let them end strong rather than them linger for another year or so before being unceremoniously axed. No offense to Jason Latour and the quality of his work. I enjoyed it. But Marvel knew this book wasn’t going to survive without Ed Brubaker. We knew it wasn’t going to. Pretending otherwise just ends up weakening the character, leaving them to limp along to the finish. 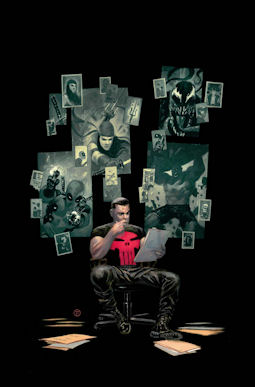 Is that Charles Soule taking over Thunderbolts for awhile? The Soule who writes Swamp Thing for DC Comics and just took over Red Lanterns after Joshua Hale Fialkov jumped ship to Marvel? I seem to recall it being announced that Fialkov was taking over Ultimates for Marvel just before the crap hit the fan with him and DC. Man, that would be crazy if that happens with Soule now too. Ignore my rumor-mongering.

X-Factor promises the truth about the connection between Longshot and Shatterstar. Father and son? Cousins? Alternate reality siblings? Are they each others’ own grandfathers? Whatever it is, the long-awaited reveal seems like another indication that the “End of X-Factor” story arc may be the real deal.

Atlantis and Wakanda are going to war in New Avengers. The evil Reed Richards -- can we call him Mr. Doom? -- returns in Ultimates. There’s another Carnage limited series on the way, but it’s not written by Zeb Wells this time. Kate Bishop takes the lead in Hawkeye Annual. Iceman is apparently conquering half the world in Astonishing X-Men and no one is noticing. And Wolverine: In the Flesh crosses Wolverine with Top Chef Masters.