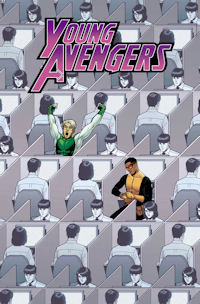 June sees the end of Age of Ultron with an ending so secret that Joe Quesada had to do the art for the final pages, because you know you can’t trust Brandon Peterson and Carlos Pacheco. They’re always blabbing about how stories end. Pacheco? Totally told me Bruce Willis was dead in Sixth Sense.

It’s also Wolverine month with Wolverine variant covers abound. I’m not sure why. Is there an anniversary? Regardless, he’s everywhere in June, and he’s present on quite a few non-variant covers as well. And to probably no one’s surprise, Frank Cho’s Savage Wolverine will become Zeb Wells and Joe Madureira’s Savage Wolverine, and it looks like it no longer has anything to do with the Savage Land. Is there a real reason Marvel didn’t just make Cho’s story as a limited series?

Marvel’s feeling good about Daredevil still, though not quite good enough to tack on a second ongoing series for the character. What? Savage Daredevil doesn’t ring? Instead, we have the launch of another limited series to take the place of Daredevil: End of Days. The first issue of Daredevil: Dark Nights comes to us from Lee Weeks with a title that Batman should possibly sue over.

Guardians of the Galaxy, which hasn’t really even started yet, is already being declared the biggest surprise hit of the year. Also, anyone surprised that a book from Brian Michael Bendis and Steve McNiven is a success needs adult supervision. 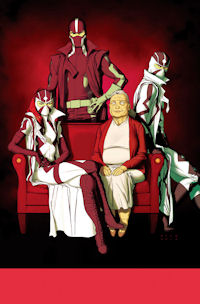 No particular surprises from the X-Space. Young Cyclops gets to meet his brother, whom is long-lost to him. Magik gets mixed up with Dormammu of the Dark Dimension, apparently confusing which lame Hell spinoff she’s supposed to be involved in. The second issue of the all-female X-Men may come out, but who really knows at this point. And is X-Factor coming to an end? A story arc titled “End of X-Factor” is just so ambiguous. No, seriously. Half the time stuff like that is pure hype that you can’t trust.

Joshua Hale Fialkov is slutting it up -- in a publishing sense, of course. June has him taking over both Green Lantern Corps and Red Lanterns over at DC Comics, but now, June also has him taking over Ultimate Comics Ultimates. Can you do that? Write on an ongoing basis for both companies? Sure, you should be able to. But that’s not the same as whether they’ll let you. Who wins in a tug of war over Fialkov’s talents? Usually when it comes to writers, they’ll happily jump ship over to Marvel. But I have to say, writing two titles in the Green Lantern franchise is a more attractive assignment than being the next guy to try putting together something worthwhile out of the scraps of the Ultimate Universe.

The oh-so-secret ending of Age of Ultron is revealed, but the question is whether it gets revealed early by leak or news outlet like just about everything other thing does lately. Wolverine shows off all his outfits in what I guess will be Wolverine Fashion Show Month while Savage Wolverine gets notably less savage. Marvel goes poaching for one of DC’s rising star writers. Thor: God of Thunder gives us a new, one man Thor Corps. I have a random suspicion FF will be having a pool party. And that’s June for Marvel Comics.