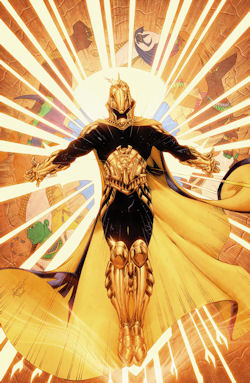 DC Comics has released its solicitations for April 2013, and the theme of the month for it will apparently be gatefold covers. The released promo images for each show only half of what will be the actual full-sized covered, concealing what we are to assume will be shocking reveals on the other half. Like how it’s totally Batman using Kryptonite against Superman, except something actually shocking.

Personally, I think they’re missing the opportunity to extend the theme to April Fools by having every single other half of the gatefolds be Stephanie Brown bound and gagged in a car trunk with a license plate registered in Limbo. But I’m awfully mean.

The solicitations also reveals a few sudden creative team changes where previously announced teams have already been replaced for another. In a way, I guess that also applies to an April Fools theme.

Here are some things to note about what’s coming from DC Comics in April. 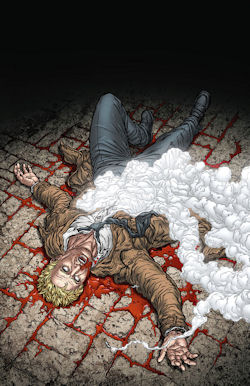 There’s no shortage of sudden creative team changes coming in April. Robert Venditti, who has at least been solicited as writing the first issue of Constantine, has been replaced by Jeff Lemire and Ray Fawkes for the second issue in April. Word is the change comes from Venditti being unable to schedule the writing chores for two ongoing DC books at once. However, I have to say that hitting that realization after only one issue is a bit suspect. Another change comes from Birds of Prey, where Christy Marx has replaced Jim Zubkavich. “Replaced” may be too strong of a word, considering this change came so fast that Zubkavich won’t even be on the book for a single issue. I haven’t heard a substantive explanation for the hasty change.Finally, Jim Starlin will be taking over Stormwatch from Peter Milligan. Stormwatch, honestly, is the Authority. So Jim Starlin will be writing the Authority. I kind of feel that speaking that sentence should tear a hole in the fabric of reality.

There are some less sudden creative team changes coming as well. James Tynion IV is getting a bigger role in the Batman franchise as he begins writing Red Hood and the Outlaws. Here’s hoping to never have to hear about the All-Caste again. Charles Soule comes on board Swamp Thing to follow Scott Snyder and give a real test to one of the New 52’s success stories. Can DC keep Swamp Thing going without Snyder? 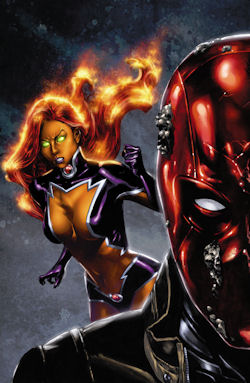 Two more of the original New 52 titles won’t be seeing May. April sees the final issues of both I, Vampire and DC Universe Presents. This isn’t surprising. Anthology titles like DC Universe Presents never seem to succeed. With no regular creative team or regular characters, it’s hard to expect to also have regular readers. Hell, I only read the Black Lightning/Blue Devil story.. I, Vampire has never been a sales success either. It’s one of those books that has received a lot of critical acclaim, and that don’t pay the bills. So no, these cancellations aren’t surprising. The Fury of Firestorm: the Nuclear Man surviving yet another wave of cancellations despite having neither sales or critical acclaim? That’s more surprising.

Down in the solicitations for collected editions, DC is soliciting hardcover collections for both Warren Ellis’ run of the Authority and the second half of his Stormwatch run. Otherwise known as what I consider the only issues really worth reading. ...Is Jim Starlin seriously going to be the new Stormwatch writer? This is not an April Fools thing?