Who Should Try Onlive?

When Onlive was announced last year, my first reaction was “There’s no way it can do what they say it does”.  What they claimed it could do was let you use the internet to control a video game that was being run on a server, which would then stream live video of that game back to your computer. Basically, you could play on a powerful game rig through the internet, while watching hi def video of that game on your crappy computer at home.  It sounds a lot like sorcery, but it turns out that Onlive actually does what they claimed.

When first announced, there was a fee to use the service, but that was done away with last month, and now anyone can use Onlive for free.  There are around thirty games available, and players can buy unlimited playtime for about the same price as a retail copy of the game.  Many of the AAA titles also let players sort-of rent games; five dollars will get you three days of playtime on a game like Darksiders, or Arkham Asylum, and you can pay about nine bucks for five days. 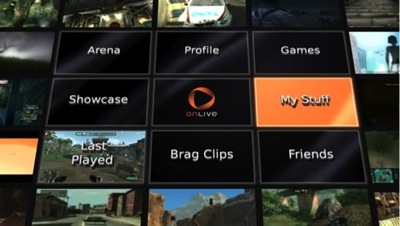 Many hardcore gamers will no doubt roll their eyes at Onlive.  After all, if you have a decent gaming rig, there isn’t much to compel you to use Onlive.    However there are a handful of reasons for hardcore gamers to poke around with it.  You can try most of their games for 30 minutes, without paying a fee. This is handy if you’re curious about a game that doesn’t have a PC demo, like Assassin’s Creed II.  They also have sales on occasion; you could have bought Mafia II for $25 last week.  They also have “Buy One Get One Free” offers now and then.

So, who might actually be interested in Onlive?  Let’s start with cheapskates.  You know who you are.  If you’re reading this article on a crappy Dell you bought four years ago, you should go make an account at Onlive.  Not everyone can drop 200 dollars on a new graphics card every year, and Onlive is a good solution for those who just can’t afford to upgrade, but still want to play Borderlands.

Of course travelers who play their games on a laptop should have a look.  Two months ago Onlive became compatible with Wi-Fi, so you can play Splinter Cell: Conviction on your little ibook while you loiter at a Starbucks.

You may have noticed I said ibook.  That’s right, Onlive is compatible with Macintosh computers on the 10.6 operating system (Which came out a little over a year ago).  Of particular interest to Mac gamers is the fact that if you use a Mac with Onlive, you can play games that aren’t even available for the Mac.  I ran a few games on a Mac mini, which is the low end Mac desktop, and everything handled fine.  I was surprised as how well the service worked on a machine that is normally completely inadequate for gaming.
One upcoming development that Onlive has in the works is a “Micro Console”.  It’s a little gizmo with an Ethernet port, HDMI out, and a wireless controller.  This will hook into your TV or monitor, and they claim that you’ll be able to play games on your TV without even needing a computer.  I would say that there’s no way it can do what they say, but I was wrong the last time I thought that.