In last week's feature, we looked at six upcoming Wii U titles that will be available for purchase with the system on the Wii U launch day, November 18th. This week, we will look at six more titles, and this is where we have some of the games that everyone is excited about: the Nintendo exclusives. This week will include a Mario game and a party game that features many of the classic core Nintendo characters.

A collection of sports inspired mini-games that is meant to be a party game for your friends and family, Game Party Champions is the fourth iteration in a series that has plagued the Wii with banal mini games for years now. This game will feature four main mini-games, including air hockey, hoop shoot, ski ball, and ping pong (and in some pictures I have seen a batting cage, so more likely there are some hidden "gems"). The game will also have three different modes which will include auick play (quick pick-up mini-games), a story mode where players will seek out the title of "Champion" (no worries, it doesn't make sense to me either), and finally the party Mode, where one player will play a mini game on the game pad, while other players try to use the Wii-motes to "grief" them into messing up. The player who can score the most with the gamepad then wins. Unless you are a huge fan of mini-game collections, this might be one worth glossing over, especially with a much more promising and fun mini-game collection in Nintendo Land.

While this sequel to the classic dance party game will have already been out on the other systems for a little over a month at the time of the launch, the Wii U version will come with only a few extra goodies to help sway gamers' minds towards this system. For one, it will contain everything from the other versions, including the new "Dance Battle" mode and "Just Sweat" mode, but will also include a new "Puppet Master" mode. In this mode, the player with the gamepad will be able to manipulate the routine as he or she sees fit, altering the choreograph as well as the visuals in the background to try and trip the other players up. This also means that, using the Gamepad, it will allow for five players to play at once rather than just the usual four. Other than this and a few extra songs, the Wii U version looks like it is offering little else other than the core game. On the bright side though, Gangnam Style is one of those extra songs.

Probably the game that everyone is most excited for (and the one that I am even buying the Wii U for), New Super Mario Bros. U will once again allow players to once again jump into the faithful plumber's shoes as he battles his way through the Mushroom Kingdom to save Princess Peach. Perhaps as a slight spin on the narrative, Mario and his crew (four players can once again, like in the Wii entrant of the series, can play at once controlling Mario, Luigi, and two Toads) will be battling their way back to Princess Peach's castle, as Bowser and his kids, at the onset of the game, have forcefully ejected Mario and friends from the castle and taken up roost their themselves. Players will now travel back to the Mushroom Kingdom over one large map instead of individual maps for each World, making this seem more like an epic journey rather than eight themed but disjointed Worlds

This game will also feature some new power-ups and some tweaks to existing power-ups, including a Flying Squirrel suit which will allow Mario to glide softly across the screen or plummet at high speeds. As well his mini-mushrooms will now allow Mario to run up walls, and the cute Baby Yoshi's, last seen all the way back in the original Super Mario World for the SNES, will be making a reappearance! These Baby Yoshis each have individual powers, such as being able to be inflated like a balloon, light up dark areas, or blow bubbles towards enemies. The game will also feature a few new game modes such as the Boost Rush and Challenge Mode. In Boost Rush mode, the screen will begin to scroll faster with the more coins your characters rack up, making the action much more intense as the level progresses. Challenge Mode is just like it sounds, though, and presents unique challenges for each level in a very similar fashion to the challenges from Wario Land: Shake It!  Finally, the game just looks beautiful and polished with the 1080p HD graphics available on he Wii U, with a rich depth of field in the backgrounds, as well as a much larger scale and detail to the action on screen. A Mario platformer has really never looked better. Like I said before, it is classic Mario action presented on a whole new system, so it really might be the reason that everyone will be buying the system next month.

The original version of Ninja Gaiden III on the Xbox 360 and the Playstation 3 was considered a huge flop by gamers and critics alike due to some grievous design flaws, terrible pacing, and gameplay that was more reminiscent of Dynasty Warriors than a true Ninja Gaiden game. Team Ninja, the development team behind the game, is looking to make some steps to ameliorate this in the upcoming Wii U version. The combat has been reworked and tweaked so that Ryu Hayabusa is actually responsive and is more technical. in general, the enemies are much more aggressive and varied, and Ryu now has six weapons available right from the get-go, rather than just his katana, adding up some much needed spice to the combat. His new combat mechanics, such as the "Steel to Bone" and "Charge Attack" mechanics which were introduced in the PS3/XBox versions, have been reworked so that they are much easier to execute and fit into the gameplay much better (previously the Charge attack took a loooong time to execute, and the "Steel to Bone" was an enemy grab counter that could result in an instant kill, but the mechanics to execute it were wonky and were really easy to miss). The "Grip of Murder" segments, which were rather disjointing dull affairs where Ryu was supposed to be close to death and could only swing his katana like a spastic drunk, are now reworked so that they are gripping arena battles where your health is being continually sapped, and the only way to refill your health is to slay the enemies. Finally players will also get a chance, in the Wii U version, to play as Ayane from the Dead or Alive series, who will have her own campaign and unique missions. Reception of the Wii U version has thus far been pretty positive, and many feel this this will be a step in the right direction for the Ninja Gaiden sequel. If Team Ninja can really pull this off and turn everyone's opinion around, then Ninja Gaiden 3: Razor's Edge will definitely be a feather in the cap for the Wii U on launch day. 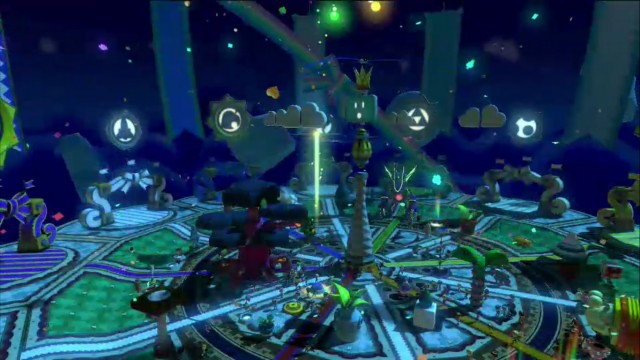 Similar to how Wii-Sports was the launch game used to show off the capabilities of the Wii's motion capabilities, Nintendo Land another mini-game bundle that will show off the asymmetric multiplayer gameplay that Nintendo has been touting with the Wii U's gamepad. Unlike Wii-Sports though, Nintendo Land's mini-games are devoted to the Nintendo characters and worlds that fans have enjoyed for years, making it much more of a celebration of Nintendo's long history. Based around a kind of "Nintendo Carnival," each of the mini-games is based off of one particular franchise or character, from well known characters like Mario and Donkey Kong, down to some obscure titles such as Nazo no Murasame Jo, an old 1986 Famicom Disc System game. Most of the games revolve around the gamepad in some in some fashion, usually pitting the Gamepad player against those using the Wii controllers. For example, in the Luigi's Ghost Mansion mini-game, the player with the Gamepad controls a ghost who is hunting the other players, who are either Mario characters or Miis. In a sort of "murder in the mansion" scenario, the players can defend themselves from the invisible ghost by shining a flash light on him and hurting him, and the game ends when either all the players are defeated or the Gamepad ghost is defeated. This is just one of the twelve mini-games that will be included in the final product, which will be either available for purchase separately or included as a pack-in-game in the Premium Wii U bundles.

Just like the Wii included the original Raving Rabbids game during it's launch, the Wii U will include the seventh Rabbids' title, Rabbids Land, in its launch. Instead of being just a general collection of mini-games, similar to the first game, it is instead more akin to the Mario Party franchise. Like Mario Party this Rabbids' title is more like a board game punctuated with a series of fun mini-games. Not much is known, thus far, about how the board game portion will be played, but the mini-games are very similar and incorporate the asymmetric gameplay that we have seen on other titles. For example, one mini-game is a send up of a "Tunnel of Love" you would see at an amusement park, and the player(s) must decide which Rabbids are soulmates for each other based on the cloths that they are each wearing (matching on criteria such as the design of their underwear, etc). The player on the gamepad gets one particular viewpoint, while the players on the television get another particular viewpoint, and when each player has chosen their particular "choice," they both get to see if their particular choices match. This continues on and on until the time runs out. Of course, this is just one of a plethora of various mini-games in the game itself. Of course this is all through the wacky vein of the Rabbids universe, but who knows, maybe this will be a big seller due to it being a party game.

That's it for this update, but next week we will look at six more, including a big fighting game, a racing game that is more for the Sega fan than the Nintendo fan, and the latest from the Warriors Orochi franchise.