Will The Baconing Surpass Deathspank?

I was a big fan of Ron Gilbert’s Deathspank and its sequel Deathspank: Thongs of Virtue. The game had a funny sense of humor, an imaginative world and fun RPG/Adventure gameplay. However I was quite surprised at the announcement that Hothead Games would be developing a third Deathspank game that follows on from the ‘evil’ ending of the last game. I was even more surprised when I learned that they would be putting this game together without any input from the franchise creator Ron Gilbert. With The Baconing less than a week from release, it will be interesting to see if it can match the humor and fun ARPG gameplay of the last two games as well as continue the story in a meaningful way. 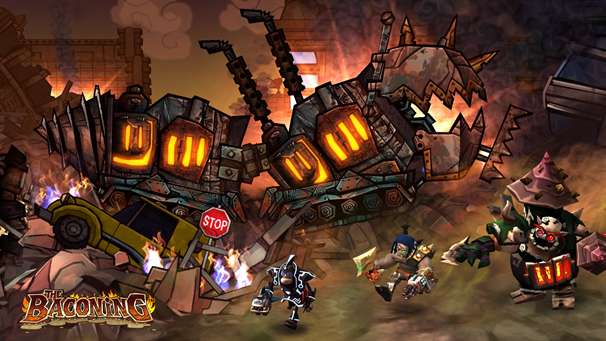 While the first two games told the story of Deathspank and his quest for “The Artifact” and “The Thongs of Virtue”. The Baconing is an all new adventure in which Deathspank must defeat the evil Anti-Spank and destroy the Thongs in the “Fires of Bacon”(I’m not making this stuff up, this is the actual plot). Hothead are claiming that The Baconing will be a far more stand-alone experience than the last Deathspank game and they claim that this is the reason for Deathspank not being in the title.

While the first Deathspank game was set in a humorous parody of a fantasy world and Thongs of Virtue featured more modern elements and settings such as pirates, cowboys and a French warzone. Hothead are calling The Baconing “The ultimate sci-fi adventure” and from what the trailers of the game show, this looks to be the case with numerous robots and Cyberorques looking to be Deathspank’s foes of choice this time around and Deathspank himself even looks to be sporting some TRON-esque armor.

While the humor of the first two games made them worth playing, the Diablo-esque gameplay of Deathspank was a bit clunky at times. Hothead are looking to fix these problems by making the AI enemies in the game smarter and also implementing cover points for Deathspank to use. These changes sound quite interesting to a Deathspank fan and I’m intrigued to see how a cover system works in an ARPG like Deathspank.

The other big improvement that Hothead are pushing with The Baconing is improved co-op play. The first two games featured co-op for two players, however player two was relegated to the role of sidekick and was unable to really progress or customize their character in any way, nor did they have any impact on the story. In The Baconing, Hothead are promising four new characters for the second player to take control of, these characters look to be much more fun to play than their predecessors, despite still being unable to earn loot or level up.

The Baconing is set for release on PSN on August 30th, while the PC, Mac and XBLA versions come out on August 31st.