Will The Imperial Agent Define Star Wars: The Old Republic?

Killing a space warthog with a lightsaber is pretty much the same thing as hitting a magical warthog with a magic sword. It’s neat to see a MMO in a sci-fi setting like Bioware’s upcoming Star Wars: The Old Republic as opposed to the usual fantasy world, but the question remains as to what will make this game more than “World of Warcraft, but Star Wars”?

SWTOR has the usual MMO archetypes, Heavily armored knights who fight hand-to-hand with their lightsabers. Sith who use their Force powers to smite enemies with powerful ranged spells like a mage.  There are Bounty Hunters who take down foes from a distance with their blasters.  All of these character classes have slight tweaks on their traditional fantasy counterparts, but none offers quite the unique experience as the Imperial Agents, and their Light Side counterparts the Smugglers.  It’s true that they resemble traditional rogues in many ways, but Star Wars: The Old Republic adds in a feature not seen often in MMO’s: A cover system.

It isn’t exactly a Gears Of War type of cover system; SWTOR is still bound by the rules of a MMO.  Hits are determined by character levels and stat bonuses, rather than a physics system, but the Imperial Agents and Smugglers have theatrical animations to dive for cover when in combat, and doing so grants them special powers that can only be used when behind cover.  Once the player targets an enemy, an icon appears next to places where the character can take cover and attack the target enemy.  Players can then choose which of these locations to use, and hitting a button in the power tray will cause the Agent or Smuggler to automatically move to the selected piece of cover.  This sort of tactical gameplay mechanic hasn’t been seen before in a MMO.

All of the SWTOR character classes have Light Side/ Dark Side counterparts that play much the same way, a Jedi Knight uses melee attacks just as a Sith Warrior does.  However each class has the choice of two specializations to help make characters more distinct.  One of the Imperial Agent’s specializations is a Sniper.  Blasting enemies from behind cover with your sniper rifle is a far cry from the usual MMO action, and will definitely make the Imperial Agent stand out among the other ranged attackers from competing MMOs. 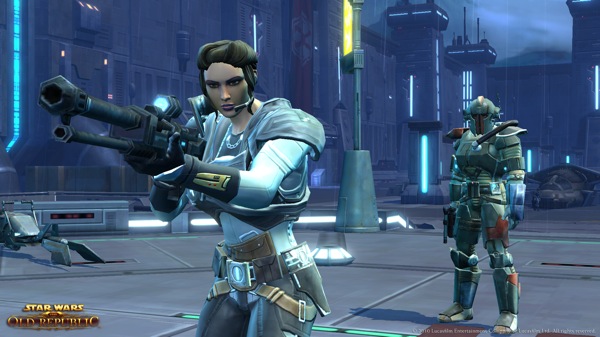 Then there is the storyline.  SWTOR gives each of the character classes a unique origin story, and even when the characters venture out of the starting zones, the class-specific adventures continue throughout the game.  The storyline is just as rich as what was found in Bioware’s Knights of the Old Republic, but has a pinch of Dragon Age: Origins with the unique stories for each class.

The Imperial Agent’s story has a very authentic Star Wars feel, and arguably offers the most insight into what the Empire is truly about.  As with all of the characters, the player can make whatever alignment choices they like, so the Imperial Agent can be played Light Side as a heroic patriot trying to make the best of bad situations by choosing non-violent solutions to problems.  The option of sadistic psychopath is also available, but the Light Side dialog choices for the Agent offer a morally complex storyline, rather than clearly-defined “Correct” choices for goody-two-shoed Jedi, and cackling villainous Sith.

Star Wars: The Old Republic comes out for PC on December 20th, but early access is already available for those who pre-ordered.  You can see the Imperial Agents in action with the video below.  Check back with Player Affinity for our review after the official launch.