By: Mitchel Broussard | Movie Reviews | July 21, 2014
Stop me if you have heard this one before: a young, good-looking couple with mismatched ideals plan a vacation in an uninhabited stretch of Northern Californian forest and are never heard from again. If you are waiting for the “but this is not what you think it is” segment of the tagline like what happened with The Cabin In The Woods, you will be disappointed. Willow Creek, written and directed by black comedy indie darling Bobcat Goldthwait, is nothing if not straight-faced. There is no final act twist, no monumental third-act rug-pulling, not even a traditional final grandiose horror set-piece that it seems most well-touted horror flicks of recent years must include to be taken seriously. And the thing is, I love those movies. The Cabin In The Woods and You’re Next's and Mama's of the world are some of my favorite movies in recent years. I am a victim of the cliché Hollywood horror script, and well aware of it. If those movies were a sickness (hypothetically, of course), then Willow Creek could be the medicine. It is stunningly well made, succinct, efficient at its job and arguably good for your ailing condition. And like most medicine, it tastes funny going down and despite all the good it does for you, it leaves an odd taste in your mouth. The thing is... despite how weird it sounds, you may just like the taste. 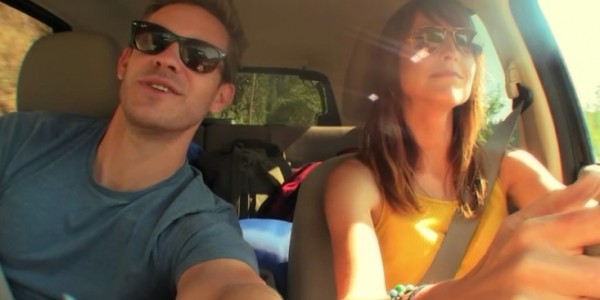 The first half hour acts as a sort of travelogue of young couple Jim (Bryce Johnson) and Kelly (Alexie Gilmore). It is Jim’s birthday and his request this particular year is to take a road trip through “Bigfoot Territory” (in and around Humboldt County, California), culminating in a camping trip and (hopeful) re-creation of the infamous Patterson-Gimlin footage of the late sixties. The relationship between Jim and Kelly is credible, despite heavy clichés. He is a believer, fanatically so, and truly sees his little home movie as the next big coming out party for the famed creature. She is the Scully: all eye-rolls and holier-than-though smirks, poking fun at Jim’s interview subjects after confiding their alleged sightings, and comparing Big Foot’s probability of existing to a leprechaun’s. They are broadly painted archetypes, but for an eighty-minute found-footage horror flick, they are also fairly successfully used broadly painted archetypes. And they are the best part of that opening thirty minutes. Although the idea of a Bobcat Goldthwait horror movie initially sounds like an oxymoron, his awkward, acerbic humor quickly exposes itself (and then largely disperses once the couple hits the woods). Jim’s cringe-inducing attempts at professional-grade reporting walk a very fine line of awkward and hilarious. They dine on Bigfoot Sandwiches and deconstruct road-side Sasquatch art. Jim is just self-aware enough to see the ultimate folly of his quest and laugh at himself, and Kelly is just relaxed enough to go with it all for the sake of a good time. They are, essentially, people you kind of want to hang out with. 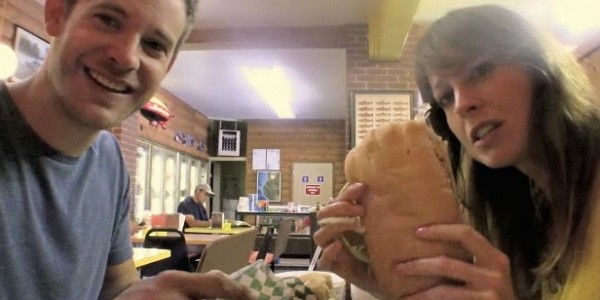 Unfortunately, too much time is spent on these silly tone-setting moments that go nowhere. This is an eighty-minute horror movie that spends sixty percent of its runtime on gags about poor camera work. If there were a sense of dread mixed into the black humor that built up to the second half, it would work. The opposite, too, being if the humor carried over into the played-straight second half. As it stands, it builds a tone of near jovialness – you almost expect they will find Big Foot, and punch a hole in the top of their Jeep and bring him home with them – that feels utterly out of place once the horror elements seep in. The rest of the movie’s elements – be it Jim and Kelly’s relationship or the latter half’s tense moments – are all so successful in utilizing clichés to act as shorthand and thrust the plot forward without any unnecessary, plodding exposition, it begins to seem this opening was padded out for the sake of adding runtime. Everything elsewhere in the film is without a doubt integral to the whole, and a good portion of the opening just is not. Even though it could have cut down the film to just over an hour, it is easy to wish the same economical measures had been applied to the glacially-moving beginning. 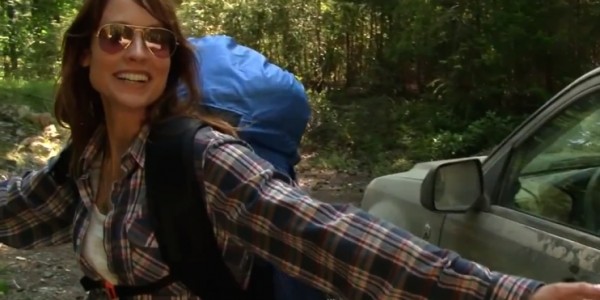 But there’s the rub: once Willow Creek gets going, you may completely forget the first half even existed. Once Jim and Kelly don their Eddie Bauer-looking my-first-hike backpacks, Goldthwait’s surprising penchant for terror becomes triumphantly apparent. At first, a crazed local warns them off the land, then a sock is hidden up a tree. More clichés used by knowledgeable screenwriters and a director that wants to be economical and not dawdle in the desperation to be something they are not. Even more surprising: Jim and Kelly’s characters survive the redundant opening act to be someone you care about, someone that you do not want to be brutally mauled to death in the woods. Johnson and Gilmore are two unknowns who feel utterly at home whispering fearful snippets at one another in a small dark tent on the forest floor. Speaking of the tent, once the first night falls in Willow Creek, the true terror begins. I will not dwell on its dark, clever shocks lest I spoil them, but I will say that smack dab in the middle of the movie is a bravura set-piece that is so unbearably long, so teasingly drawn out, so tensely protracted that only once it is done do you realize its greatness. It is the movie at its most synergistic, eager to terrorize best, and in all regards - acting, writing, directing, lighting, etc. - it prevails. 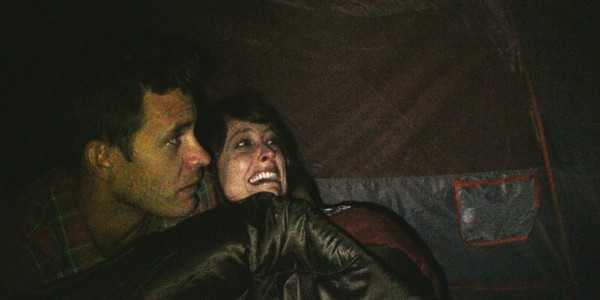 Once it was over I realized I was sitting, quite literally, on the edge of my seat, short of breath and utterly thrilled to be so thoroughly anxious. The proceeding scene of a tension-filled daytime hike and one last night-time fear-fest that introduce extraneous, uninteresting details to the Bigfoot mythos never quite reach the levels of that central set-piece, but it does not matter. The movie rides on the waves of that scene's ingenuity and thrill all the way through its somewhat head-scratching third act and middling finale. It is an unforgettable moment that is bookended by a plodding exposition-heavy opening and disappointing dénouement, but while Willow Creek rides high, it is a lightning bolt to the boring, shuffling corpse of the found-footage genre. And, might I add quite sheepishly, I was genuinely, truly, scared. In the relative safety of my overstuffed couch, I was scared like I was when I was ten and convinced that the clothes hanging over my closet door were the evil tooth fairy from Darkness Falls. It is rare to be honestly frightened by a movie anymore, and though Willow Creek is far and away from a perfect genre flick - it is too tonally bipolar and egregiously inconsistent in quality for that - it is also a movie whose faults are quite easy to forgive for the terrifying, glee-inducing frightfulness of its whole.
Rating
7.5
Pros