By: Justin Moody | Comic Reviews | May 14, 2010
The "Almost Human" story line ends with this issue and so does the guest appearance of Aphrodite IV. For those unfamiliar with Aphrodite IV, she's the fourth in a line of android assassins. She's been sent to collect a rogue scientist that helped in her creation and has been forced to team up with Sara.

The duo has put aside their differences to navigate the lab of Cyberdata to capture the doctor. Sara has made Aphrodite agree that they'll bring the doctor to justice and not terminate him on site. Blocking their path, is the next generation of android assassins. Picture Aphrodite split into three then upgraded. 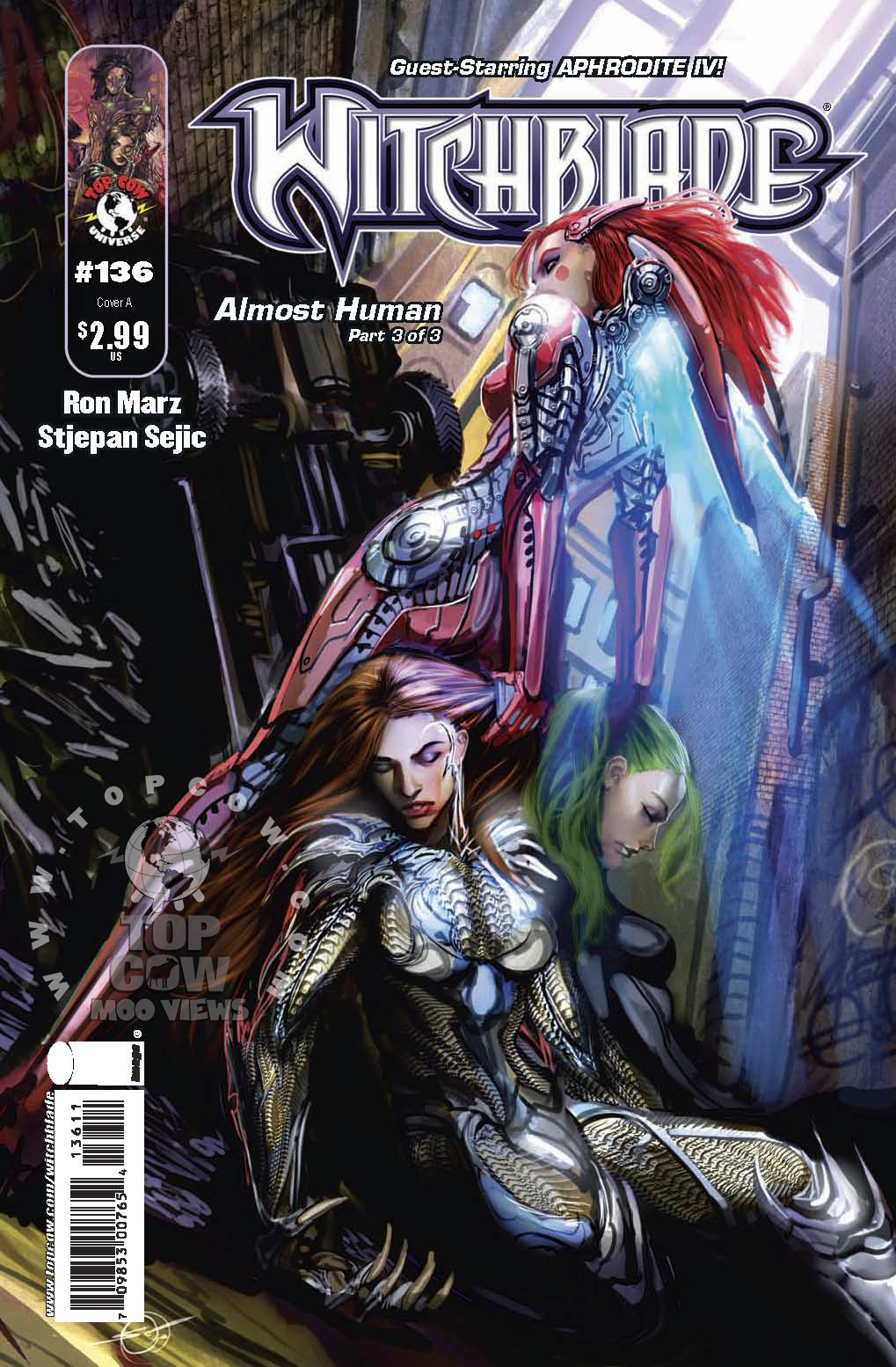 At first, Sara and Aphrodite get their butts handed to them. That is until the droids team up to perform a Dragon Ball Z-type move combining their powers. Aphrodite may not be a match for them, but Sara makes quick work of them. The Witchblade engulfs two of the droids and splits another in half. The droid beckons Aphrodite to join them, she answers back with a gunshot to her head. Sara learns the hard way not to trust an android killer as she's betrayed by Aphrodite. Luckily for her, Aphrodite likes her enough to let her live. The story ends with Aphrodite being captured to play her role in the upcoming Artifacts series.

The writing of this issue is interesting. Although art and storytelling on the page is very focused on Sara, the dialog and events are all focused on Aphrodite. Ron Marz (Magdalena) uses the issue to set up larger events in the Top Cow Universe while giving fans of the series a cool pairing between the Witchblade and Aphrodite. At times the dialog runs a little flat, but Marz plays to the strengths of his artist by keeping the word bubbles to a minimum.

The art is both amazing and off-putting -- it's really baffling. At times, Stjepan Sejic's (Angelus) art is photo-realistic and looks like an animation. At other times the panels are empty with the exception of the characters. The beginning panels especially make the characters look separated from the scene. That aside, his art style is incredible and unique. His take on the Witchblade is very different than the over-sexed versiosn that have come before. Now the Witchblade is more of a full suit of armor that covers Sara's clothes, rather than shredding them into pieces.

Sejic's coloring probably has the largest effect on the book. Given enough pages he could probably make the characters move across the page seamlessly. As it is, it adds to the strengths of his art. Without the color the images wouldn't look nearly as photo-realistic.

Marz and Sejic are kind of an unusual team, but it works really well for them. This book ties in nicely to Artifacts which was also created by the team. Marz is very good about creating storylines for new readers to jump onto and Artifacts looks to be another one of those storylines. If you've fallen out of touch with Witchblade perhaps this is a good time to see what the book has to offer.

No Witchblade isn't the blonde anymore, she's the Angelus now... yes, she's still half naked. Follow Dustin on Twitter and ask him anything on FormSpring.