It felt like déjà vu to me for most of this issue. Déjà vu of what? Witchblade: Demon Reborn #1. It's when the ending comes around that the issue picks up again, along with the artwork, which for almost the entire issue ruins the eerie mood this issue could have had. Get ready for Witchblade, the SVU addition, a.k.a. the same exact thing as Witchblade: Demon Reborn #1 with the exception of a gripping if predictable ending.

Dynamite Entertainment continue their sequel to Witchblade: Demon #1, a one-shot from 2004 about a killer that Witchblade bearer Sara Pezzini killed. Now, he's back, leaving a gruesome trail of blood behind him. Sara not only has to deal with him but another man out on bail who may just cause Sara to lose control... again.

We go through the same song and death as last issue. Sara dreams about a fight with a dead man, wakes up, takes care of Hope, investigates a murder, all events similar to last issue that make it feel like an unofficial episode of Law & Order: SVU. But the dialogue is much more menacing than before. The biggest difference is the ending, which was great, but I also predicted it in my last review.

In the opening panels our 'demon' is helping an old lady with her groceries. After helping her, rather than show us grotesque violence, the demon says "My God... I just noticed... you have such beautiful skin." You can just guess what her body looks like when we see it later. This is one of those rare instances where telling is better than showing. The actual violence is left out, which I think is actually better since it's as graphic as your mind can imagine it – and for some people, those are dark depths. Unfortunately, some light is shed on those dark depths.

The dialogue in this issue could make for some eerie moments if it wasn't always ruined by the artwork and colors. The artwork by Jose Luis is far from spectacular. Some of the characters faces look more like amateurish sketches, but he can definitely draw some good-looking and menacing dead people – but only the demonic kind, unfortunately - not the legitimately dead. His one image of a woman's murder destroyed any chance of sympathy for her. She was so skinny she looked like a string-bean and there is never once a close-up of her so the reader feels very detached from the scene. But the bloody Witchblade gauntlet was a nice touch. 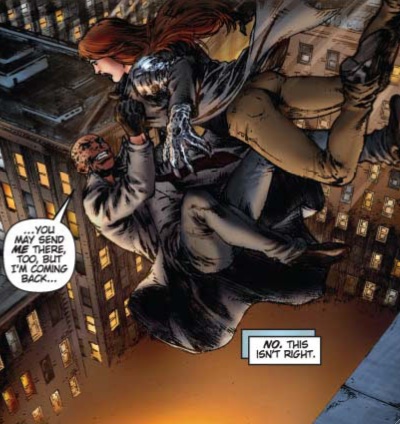 The bigger problem was the colors done by Vinicuis Andrade. There were so many moments that Andrade could have taken advantage of just by making the images darker with moodier colors. But his colors never backed up the creepy feel the dialogue had. During that opening scene with that foreboding skin comment, the demon is saying this with a powered blue backdrop behind him. Blue is a calming color, it should not be on a panel with a sadistic psychopath admiring an 80-year-old's skin too close for comfort.

Witchblade: Demon Reborn #2 has little new material until the end. Ironically, just like the first issue I would say wait until #3 to see if this mini-series will go anywhere, but it's only four issues long and two issues and not a lot has happened with the story, and that is one of the worst offenses a mini-series can commit. There are only four issues, so use the time wisely. But then the cliffhanger makes it look like #3 could be the best of the bunch. Until then, this issue was pointless, without the ending, but still had good creepy moments that still were capable of so much more. 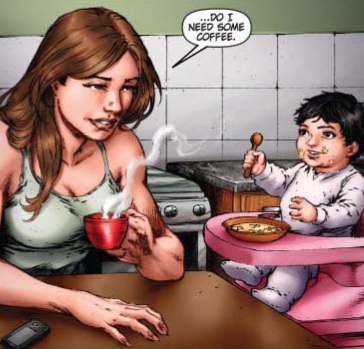