By: Justin Moody | Comic Reviews | August 18, 2010
There's one universal rule for all comic books... Being a New York City cop sucks! It doesn't matter if you're the star of the story the job will always suck. Sara Pezzini, the bearer of the Witchblade, has that sucky job. Occasionally when she's not screwing up evidence by smashing everything with the Witchblade, she has to do real cop things like bag evidence or testify at a trial.

That's where she finds herself in Due Process, testifying that a man she helped put away was actually innocent. William Hick was framed for crimes that corrupt police officers actually committed. It's cost him ten years of his life and his family. Sara wants to right a wrong and give back the life taken from William. The problem is William might be too far gone to save. 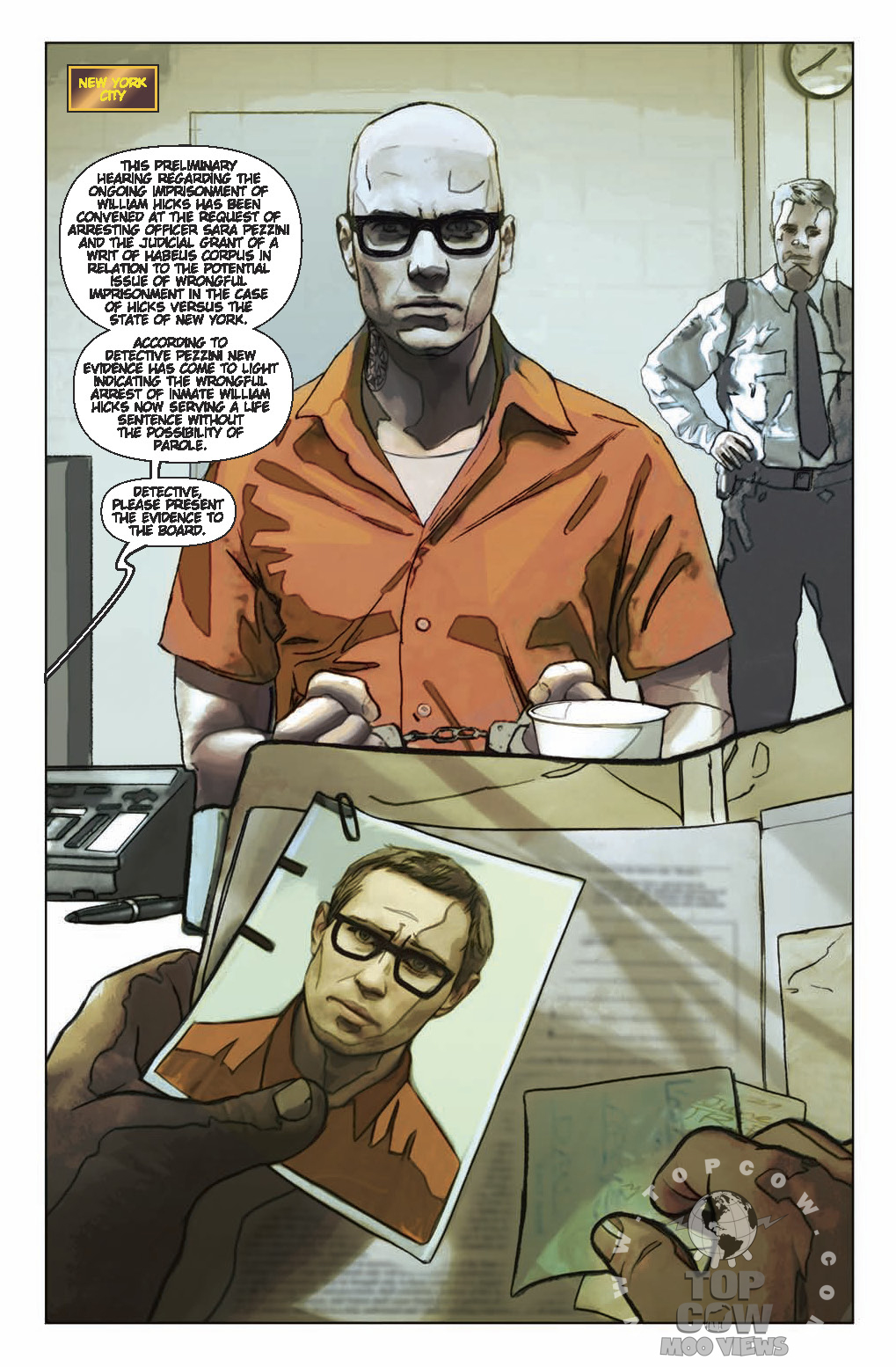 During William's time in prison he became a part of a gang that disguises themselves as in order to do the work for their secret master. That master is Agares and he gives William the power to murder and torture without killing. Every injury inflicted upon someone heals leaving the person with intense fear.

As William is freed from prison he is forced to do Agares work in order to see his family again. For ten years he must murder and torture for Agares to collect souls for him. As William walks off to his next "prison" he is encountered by Sara who offers to help him adjust to the world again. William blows her off, but Agares who is bonded to William and the other gang members flesh, does not. He challenges Sara to win William back with her words rather than her action. It becomes a matter of which voice is more powerful in the struggle for William's voice.

The major problem with this issue is that it's too short. Just as the heart of the story gets going it comes to an abrupt stop and then tries to lay the ground work for a sequel. It's still a very good book, but typical one-shot adventure past the normal 32 page count. It really is the difference between good and great because the story is affected so much by it.

Phil Smith tells a story that is rich in police procedural detail that is typically missing for a Witchblade issue. It's a nice change to see so much thought go into a simple "wrongly accused" storyline. It's definitely nice to see the level of detail go into any cop comic book. Smith succeeds where others fail or never tread by convincing the reader that he knows what he's talking about. The only aspect of the story that really made no sense to me was the fact that the injured party healed from any and all damage but that William did not. It plays a huge role it he story later on and it ended up feeling more like a loose end that never got tied up. It was as if the writer realized he only had seven pages left to tell his story. 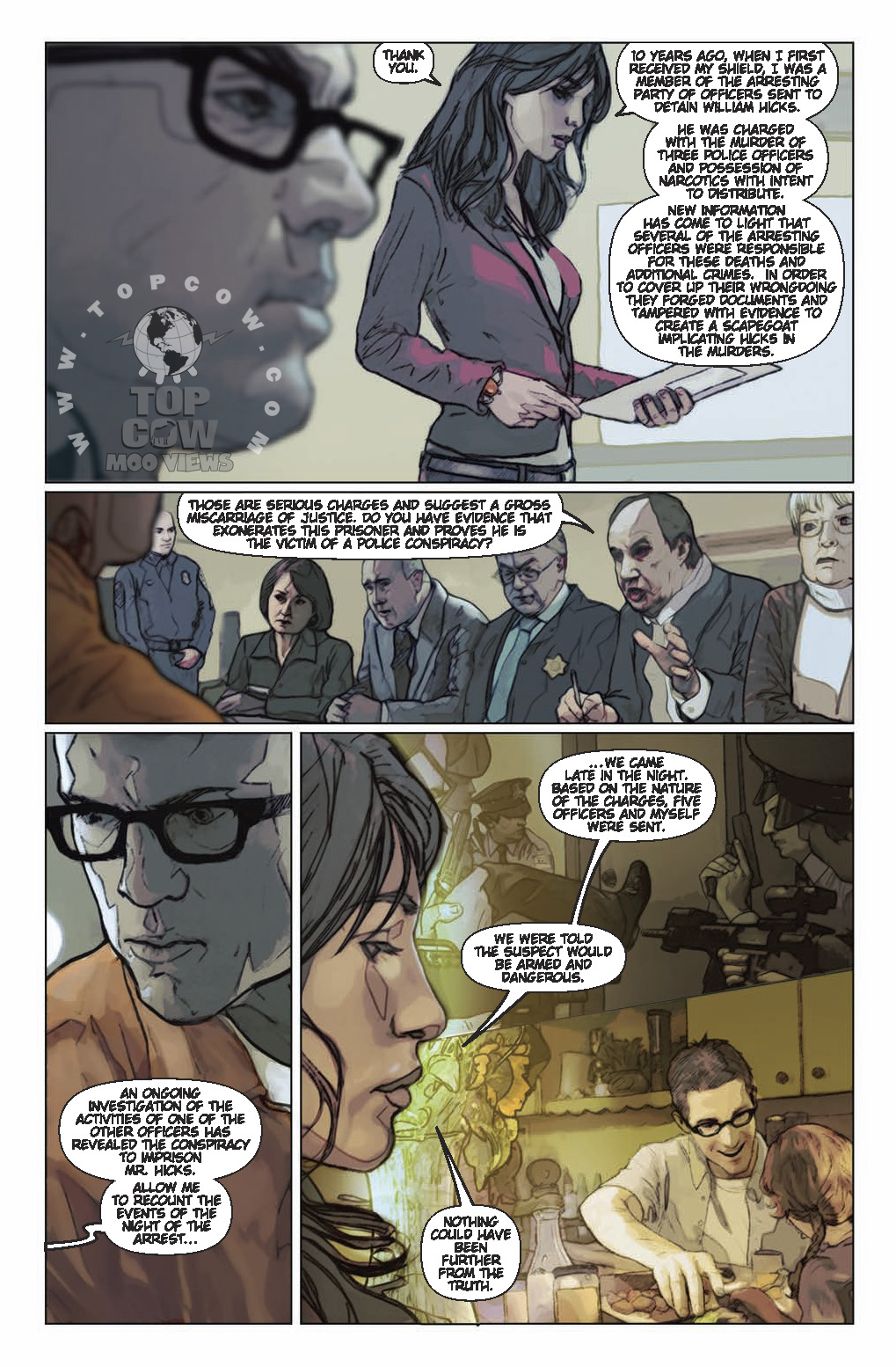 The art was very different from a typical Top Cow book but it was very stunning and fit the story well. It reminded me a lot of Sam and Twitch: The Writer in the fact that it looked animated on the page. Alina Urusov has a very photo realistic style, but then colors on top of that with a water colored look that forgives any imperfections. Urusov has an interesting take on the Witchblade as well. Sara never takes full form with the Witchblade and basically uses it mostly as an extendo-hand knocking criminals out with it from far away. It's a different use for it that's for sure, but still great to look at.

Overall this is a good one-shot that anyone can pick up and enjoy. The fact is the story never really goes into Sara's duties as the Witchblade bearer. No, instead if focuses on Sara as a cop performing her police duties. Honestly if you're looking to get a taste for what Witchblade is about this one-shot is perfect for just that.

Do you know how many New York Cops get killed in comic books yearly? Like 9,000! Follow Dustin on Twitter to find out what he's reading daily and to get up-to-date tweets on the comic department's feed.