One of my favorite things about cons is walking around and picking up independently published comics and giving them a chance. Well Wonder Con was no exception and I picked up several books that were pretty good. I don’t tend to ignore the sales pitch and just pick up random books which usually confuses the creator/seller as they think I know something about the story and that’s why I’m getting the book; but really I’m just treating it as if it were a new title arriving in my comic shop. I look at it a little and then make a decision on if I should buy it or not.

That was the case with Trigger Men. On Sunday, I stopped by the booth and met the artist and writer and even had them sign my copy of the first issue containing the first two chapters of the story. The booth was in a great location and always seemed to have someone stopping by and checking out the book. So I too was sucked in… and I’m really glad I did stopped by. 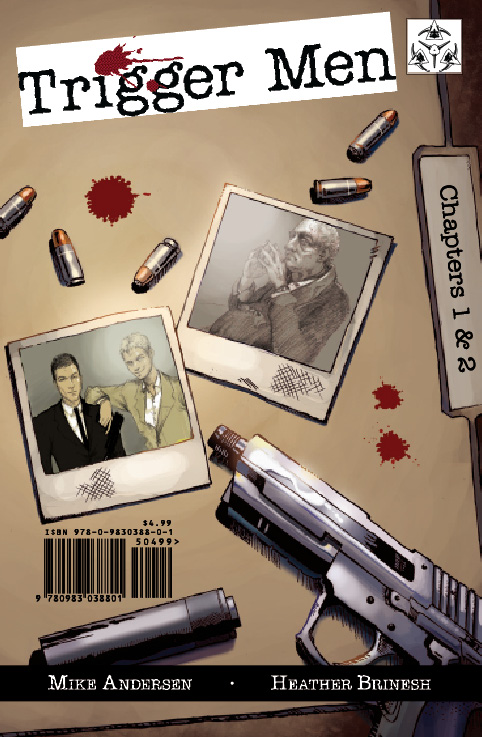 The two chapters have two very distinct voices. The first part of the story is very serious and emotional at times with hints of comedy, whereas the second is light hearted and downright hilarious at times. The story itself is about two high school friends that after being the nerds in school grow up to be hit men aka Trigger Men. That is until something happens in one of their lives that makes him quit the business. However, when his best friend says he needs him for one more job he gets sucked back into the world of the Trigger Man. It’s this one last hit that is the catalyst of the story. Nothing seems right about it, nothing goes right with it and now they have to get themselves out of a jam.

At its core the story is hit-men kill a target that puts them on the radar, they need to find a way out and have a timeline to keep if their plan is going to work. What is different is the angle of them being high school friends and acting practically like brothers. Because of this and their younger age, they have killer dialog that is completely relatable to anyone that’s had a friend that can’t do anything right. At times both characters sound a lot alike, but this is forgivable since they have a long history with each other. In general I was very impressed with writer Mike Anderson’s story and dialog.

What I really enjoyed about the book (almost as much as the pizza at a Chinese restaurant bit) was the art. The book is in all black and white with grey tones and looks fantastic. I’m a big fan of black and white comics and when they look this good, it’s hard not to like it. Artist Heather Brinesh is great at drawing guns which seems stupid to say, but I’ve seen a lot of poorly drawn guns in comics so it’s refreshing to see an artist that can draw them in a variety of poses and keep them consistent looking. Brinesh also manages to make several long (but enjoyable) conversations interesting to look at while reading. The variety of angles to the scenes gives it a very cinematic look and works with the story as well.

I was very happy with my purchase of Trigger Men and I’m looking forward to the next chapters/issues. The book is the first release from Triptych Books which was created so that the creators could do comics the way they wanted and frankly I think it works. It breaks from the comic formula in a good way. If you want to try the book out you can pick it up through Drivethru Comics which will give you a watermarked pdf to read. You can find all their details at Triptychbooks.com which will tell you all the ways to contact them as well. This was definitely one of my favorite books that I picked up at Wonder Con so give it a shot if you like stories about professional killers in a dark comedy setting.