Wonder Woman #14 – Review: And Then There Was New Light

“There Came A Time When The Old Gods Died!”

Those words, written by Jack “The King” Kirby ushered in what many consider to be one of the greatest, if not just most creative but definitely one of the first, comic book sagas – The Fourth World Saga. Created to be a long sprawling narrative spread across multiple titles, Kirby envisioned a true epic in comic form. Since the inception of this saga, and its sad fate, many have come and gone while playing around with the various concepts and characters, putting their own take on them. Notables include Jim Starlin, Walter Simonson, and Grant Morrison, but with Wonder Woman #14 writer Brian Azzarello joins the ranks as he prepares to bring forth the return of the New Gods! However, I feel that I should spend some time on the story proper before I dig into that juicy morsel. 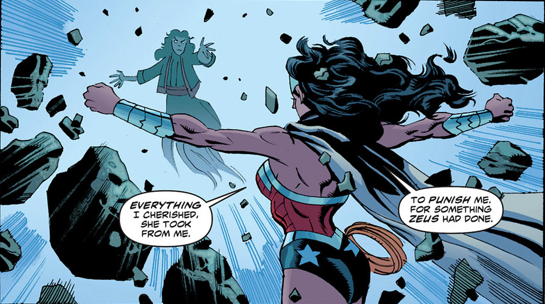 Wonder Woman has been become embroiled in a high-stakes game of espionage since the beginning of the title. The stakes at hand, though, carry more importance than typical business intrigue, but one for the control of Olympus. Azzarello has done a great job so far of showing the divinely grandiose nature of such a conflict, but it is in this issue where we see another side. A side that may have fallen by the wayside in the last couple of months: the side of family. The entire series has been about family, what it means to be a part of one, and what it takes to make keep on together, but now it is something pushed straight toward the forefront.

The main conflict of this issue is between Diana and the sister she never knew that she had, and the situation is ripe for emotional moments. Wonder Woman has never been one quick to attack, unless you exclusively read Geoff Johns’ Justice League, but one quick to understand, one quick to compassion. Put the two together and Azzarello is able to shell out something that is both action packed, but heartwarming as well. 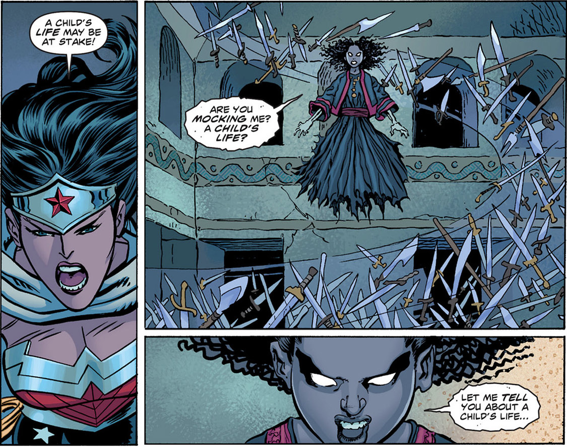 To contrast the mending of the relationship between the two sisters is the utterly dysfunctional life of the gods. We are given more insight into their dynamic, which Azzarello succeeds in making completely laughable and pitiable sight. The gods are self-destructive and it is engaging to see them at their worst. Azzarello has woven a thick tapestry with these gods, mixing classic myth with a modern spin, and this included the “First Born”, the seeming villain of our piece – but who is instead just revealed to be yet another victim of the gods’ horrible imitation of a family.

As for the long awaited introduction of the New Gods into New 52 continuity? It is subtly played off, but that is just something that adds to the power of the reintegration. Instead of a big, showy, yet ultimately flawed mess like Darksied from the first story-arc of Justice League we get a small epilogue that serves to entice the read and to set up the conflict to come. Azzarello is playing the long game and is building up to the good stuff instead of wasting the moment on something that looks cool but has no substance.

Tony Atkins, who has filled in on other times as well, provided the art in this issue. Atkins is no Cliff Chiang, but the competency level is a near equal, even if there are some questionable choices made here and there. Atkins is able to bring the design of Orion, made by Chiang, to life along with a hidden version Highfather and what seems to be a more technological New Genesis and so if it wasn’t able to be Cliff then Atkins is a good choice to fill in for him. The issue was full of sweet little moments of varying degrees of humor and tension, but things are set to reach new levels next month as the "Return of The New Gods" heads under way, because, as The King said, there came a time when the old gods died.