World of Warcraft Transitioning Into Free-To-Play

World of Warcraft took its first steps to becoming completely free to play yesterday, adding a “Starter Edition” that allows players to play for free up to level 20. The news came alongside Blizzard merging the original game and its first expansion, "The Burning Crusade," into a singular package. This means that its two exclusive races, Draenei and Blood Elf, are available to Starter Edition players as well. A list of limitations for these free players was released shortly after the news as well:

-Trade skills are capped at 100 ranks.

-Unable to trade via the Auction House, mailbox, or player-to-player.

-Characters will be unable to create or join guilds.

-Characters are not able to send whispers to other characters unless they have been added to the characters' friends' lists or have received a whisper from a character first.

-Characters will not be able to invite other players into a party.

-Characters will not be able to join parties with other characters above level 20.
-Voice chat disabled on Starter Edition accounts.

-Starter Edition accounts are not eligible for character transfers.

-RealID features are disabled on all Starter Edition Accounts. 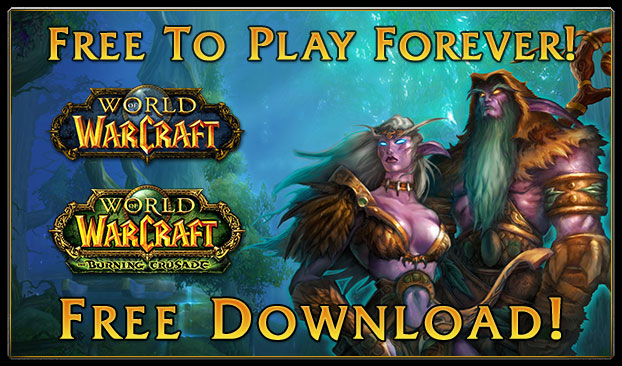 Free-to-play has been a huge trend that has been culminating in the past months and has begun to be adopted by many large companies and games that exist today. Blizzard is simply adding themselves to that ever-lengthening list. With the beginnings of the free-to-play structure seeping into the most popular MMORPG in existence today, are we at the doorstep of a new era where you only pay for advanced features in video games? Or will traditional games still exist into the decade? One can only wonder at this point, and fervently hope, one way or the other.