"The Missing Girl"
By: Jim Bush | Comic Reviews | December 21, 2014
The spooky series Wytches offers a strong third chapter in the series, devoting the issue to Charlie Rooks and his difficult position on the edge of reality and the supernatural. Based on what has occurred so far in the Image Comics series from writer Scott Snyder and illustrator Jock, the series seem like it will be a slow burn, gradually revealing bits and pieces of the supernatural while spending a great deal of time unveiling the backgrounds of the characters at the issue’s center. So far, this seems like a very good recipe.

Wytches #3 tells its story on two levels. In the first, Charlie and Lucy Rooks are in the immediate aftermath of the end of issue #2, when their daughter Sailor and her uncle were confronted with a wytch. We don’t know what’s happened to them, but we do know that they are missing. Charlie and Lucy are speaking to the police, who know she stole a school bus and figure it’s just some teenage rebellion. Charlie, especially, thinks there is something else at play.   That’s because he, like Sailor, has had an encounter with the supernatural. In Wytches #3, we’re finally shown what happened after the cliffhanger conclusion to issue #1. Charlie was confronted with a creepy woman who told her that Sailor had been “pledged” and was no longer his daughter. This would seem to indicate that the wytches are coming for her. The strange woman also cut into Charlie’s abdomen – though there was no evidence of a cut or scaring when he was found.

The police clearly do not believe Charlie’s story, and it seems that Lucy is skeptical, too. He had been drinking and we’re led to believe that Charlie may have a complicated history with alcohol. This is a neat narrative trick because we as the readers know that Charlie is correct, but we can also understand how his story – set in the mostly realistic world created by Snyder and Jock – would sound to normal folks like the imagined product of a disturbed mind.   The art in Wytches #3, like the series in general, is quite expressive and even impressionistic. For the most part, it’s clear what is happening, though often the supernatural creatures are present more cryptically, which has the nice benefit of lending them more mystery in our minds. There is also, in the post-script notes of Wytches #3, a detailed process of colorist Matt Hollingsworth. It’s a really interesting look into how the issue is created, and it makes a compelling argument that Hollingsworth is a crucial part of the visual aesthetic of the series. 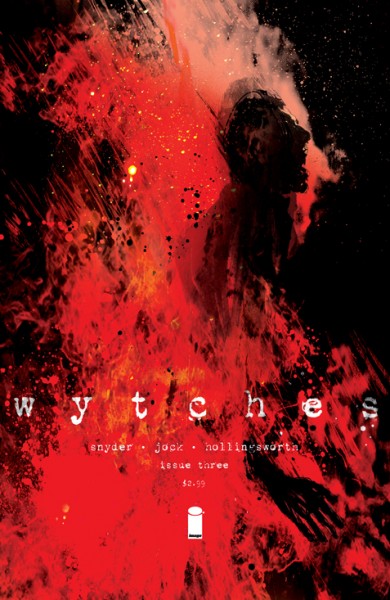 Although Sailor Rooks makes only flashback appearances and a one-panel glimpse at the issue’s end, she is still so far the most compelling character. She’s an anxious teenage girl who also has inadvertently become involved in some sort of supernatural world. Still, even without her, Wytches #3 is a good issue, with Charlie and Lucy showing a loving but strained marriage that is facing difficulties beyond anything they ever expected.
Rating
7.6
Pros