The reason I loved the last issue of X despite it's flaws was because of the gore, the intriguing character of X and the laughable stupidity of Leigh. This issue there's more blood, more X awesomeness, less stupidity on Leigh's part and some horrible puns.

After blogger Leigh believes she's been marked for death by X she finds herself in even more trouble when the corrupt Berkshire sends his goons after her. With few options, will Leigh have to turn to the Arcadia police department, a place she doesn't even trust?

Duane Swiercynski does a great job crafting a story that integrates forwarding the plot with character development. The story is still nothing new with an antihero going on a vendetta. However, the story does a fantastic job showing off X's character. 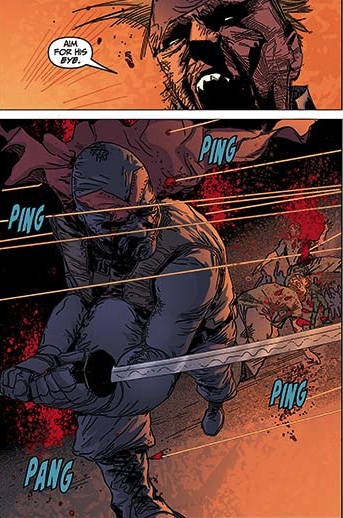 X's strategy is clever and he even puts himself in harm's way to save Leigh, proving he's not only strong but behind that X he does have a heart. This all adds to the growing intrigue of his character and my urge to find out who he is and what his motivation is.

Berkshire shows up and proves to be a more formidable villain than he appeared last issue. He does more than just sit in a chair and look vomit-inducing in this issue.

The one thing that will make or break this series for some people is the gore. The gore is very X-plicit. And don't mock me for the pun, it's on the cover of the issue! There is a lot more gore in this issue which horror fans will love. There's buckets or blood and body parts flying everywhere in this issue. Unfortunately I can't enjoy much stupidity on Leigh's part in this issue. She actually has some bright moments. I already miss being able to mock her... though she did fail at one joke where she hits a guy with a book and calls it a "blockbuster." The least she can do is be accurate and call it a best-seller. Humor's always funnier when it makes sense. Get your jokes right Leigh! But Leigh's joke is at least closer to the mark than the cheesy puns several characters say. These other puns are never a detriment to the story except when the issue ends on one, taking away from the suspenseful ending.

The weakest link in this issue is Leigh's narration. She says "gentle reader" several times too many and gives us an exhaustive history of the "underplex," which was pointless since we only see the building for a handful of pages.

Eric Nguyen's artwork still has that gritty quality that matches the tone of the comic. But with even more gore, Nguyen gets to show off his awesome violent artwork. One panel has multiple soldiers getting slashed into multiple pieces with blood spewing everywhere. To top off that gore fest Nguyen draws their innards making the imagery all the more grotesque. The gross doesn't stop there as the villain who was horribly mutilated last issue gets a new design which is also disturbing – though I would've preferred his old look, especially when Nguyen neglects his face towards the end of the issue artistically. Even worse were some poorly designed faces on a one-page spread of X bludgeoning a couple of guys. These guys have horribly distorted faces riddled with bad line work and shadows which happens not only on this page but several times in the comic. It actually works somewhat on the one page spread because it's so off-the-wall it's hard to look away, but some panels are just plain terrible through-and-through, like a guy given slitted eyes and too many lines in the above panel where he's shouting to aim for X's eye.

X's costume is still great and mostly practical, though he noticably obstructs one of his eyes with the big red target on his forehead. Still, a cool costume. 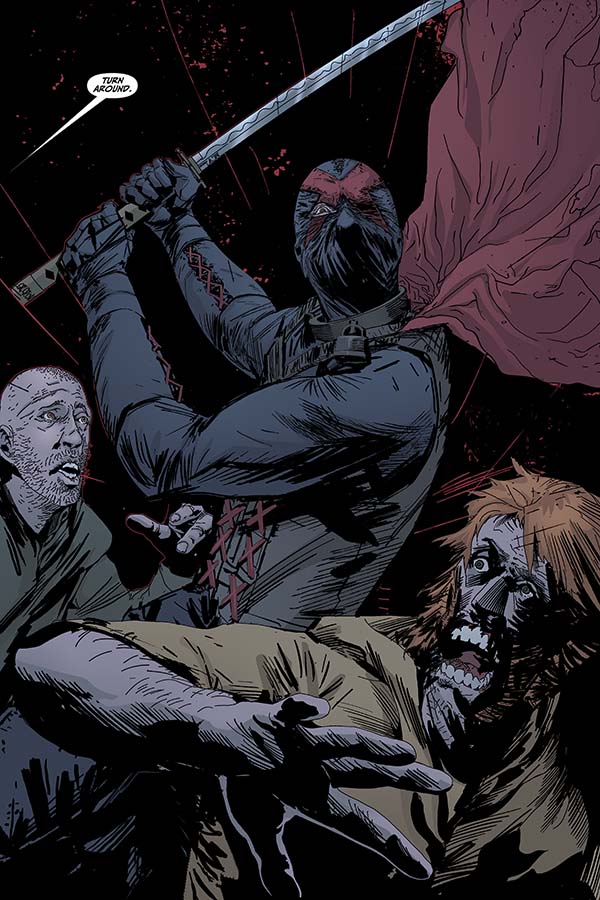 One other addition which was an improvement over the last issue are Michelle Madsen's colors. The backgrounds in some scenes look stained white which does take away from the gritty feel but also avoids the ugly looking sky from the last issue. Besides, the dark backgrounds that follow quickly send us back into the grit, even if we have to suffer through a couple of speedlines.

This is a great follow-up to X #2 focusing more on action than unintentional hilarity, going from a guilty pleasure to a genuine treasure still marred by some flaws. But while I found myself laughing at the last issue more, this issue had a lot of enjoyable gore and X continues to be a cool and mysterious anti-hero. Even if we do go out on a bad pun.