In the blink of an eye the Scarlett Witch whispered “No more mutants”, grammatically, a horrible sentence that has since haunted the mutants of the Marvel Universe. This was after Grant Morrison had increased the mutant population to an annoying amount. Think Avengers Initiative only with the X-Men: too many forgettable characters with dumb and/or lame powers. Scarlett Witch changed that. She knocked the X-Men down to a staggering 198 in total population.  The stories could have been real interesting and act as a restart to the X-Men, taking it back to the days when new mutants were a rarity. Instead, Marvel focused on them being an endangered species.

In Messiah Complex, Cable takes the first mutant born since, again M-Day (No More Mutants), and runs away with her to the future. Now with my summary, you can actually read this issue. I have done what Marvel failed to do and recap the events leading up to this cross-over event. I remember when Messiah Complex came out Marvel said they wanted to do an X-Men cross-over because they, “hadn’t “done one in a while.” Apparently, they wanted to make up for lost time and have slammed one cross-over event after the other. 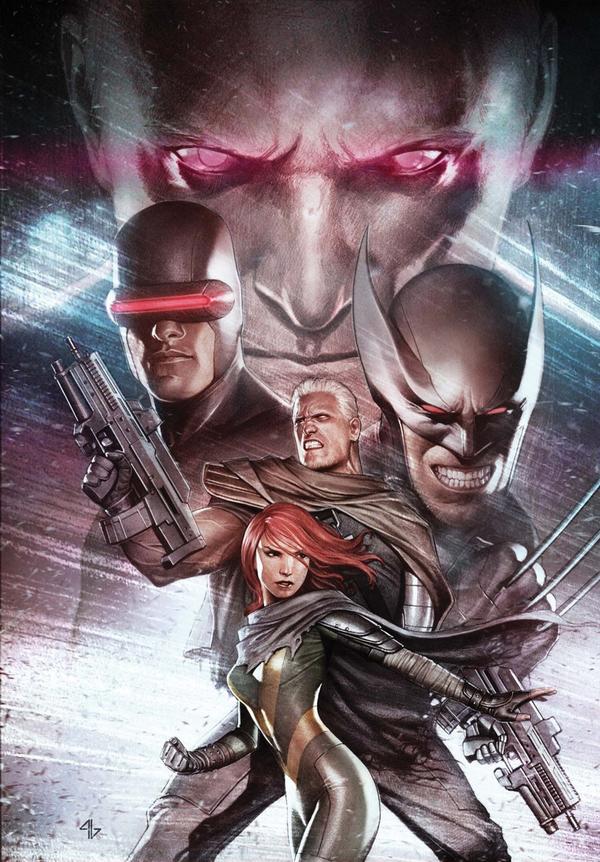 Second Coming is the return of the mutant messiah, Hope (Jean Grey reborn, just my guess), who has been raised in the future by Cable. They’re past being chased by Bishop, who desperately wanted to kill her so he’d never exist. I guess he didn’t know what a time paradox was.  Short version he could never do that. So they’ve returned. The X-Men are on Utopia, an artificial island off the coast of San Francisco. Cyclops is having a group meeting discussing the most recent mutant death and how it’s the equivalent of one million humans dying. Then, he informs the gathered team that they have work to do. At this point, it is not explained what the X-Men need to really work on, or what they even do all day. Just that there’s work to be done. Right on cue, Cerebra, the mutant detecting computer, picks up Cables return. Cyclops then strategically places teams in what’s sure to become story set pieces and moves out to get the story rolling.

Now, I know that Wolverine and X23 are allowed to kill, but when did the rest of the X-Men just start taking lives? Here’s the scene: the X-Men teleport themselves at three speeding vans that are chasing Cable. Colossus smashes through the windshield of one of the vans, which would instantly kill the driver and more than likely cripple anyone else in the van. Psylocke stabs another driver while Wolverine and X23 tear through the last van like they’re looking for candy and can only use their claws to get it. The best part is that Nightcrawler freaks out moments later when X23 kills a guy. Really? He’s surprised that they killed someone? How could he be at that point?

The writing of the book is convenient. They place characters in positions to use them later when their individual books pick up the main story and really accomplish nothing with this issue other than saying that Hope is back. Craig Kyle(X-Force, Academy X) and Chris Yost (X-Force, Academy X) seem over-whelmed with the larger story, so much so that they couldn’t find their focus for the issue. Perhaps, when Second Coming is finished, this issue will tie in quite well. However, as a solo issue it fails to do anything. There is of course a cliffhanger ending that frankly was not surprising in the least. David Finch (New Avengers, Covers) does a lazy, sloppy job on the book. His splash pages and numerous scenes of iconic poses are great. What’s not great is the smaller personal scenes that fall in-between, they look bland and unimportant. The book, with all its action, never feels like it’s moving or alive. Every scene feels posed. He also draws a right profile shot of Cyclops in the same room five times. Three of them look like Cyclops. On two of them, he suddenly is wearing the world’s largest glasses and his resemblance to Cyclops in based on the fact that he’s the only man in the room.  The art is just rushed and largely feels like Finch is fulfilling contractually duties before jumping ship to draw Lex Luthor covers for DC. For starting off a cross over, this book fails.

If this is your first X-Men book, you would be left wondering why you should side with the mutants. They come off as racists that are willing to kill at the drop of a hat. The worst part is that Cyclops is practically the only character to talk throughout the entire book. Wolverine says two lines; Storm says none just to name a few strong characters. The book is filled with X-Men about to get their hands dirty and no one has anything to say about it. If Cyclop’s character continues making decisions for all of the X-Men, not only will he go down the same path as Xavier, but he’ll fail like him too. The X-Men are a team and I don’t think Kyle and Yost really understand that, nor do they understand how to kick off a cross-over event.