"One of the best RPGs now on the go!"
By: Edward Oliveira | Wii-U Reviews | April 28, 2015
Let this intro be a disclaimer: Xenoblade Chronicles is one of my favorite games of all time since playing it on Wii three years ago. It brought a new scale to JRPGs not named Final Fantasy thanks to a Nintendo-sized budget and a veteran JRPG team willing to change the rules and adapt another culture’s style of gameplay. Now we can play it on the go on the New Nintendo 3DS, and it’s now the easiest way to experience one of the best RPGs ever made. 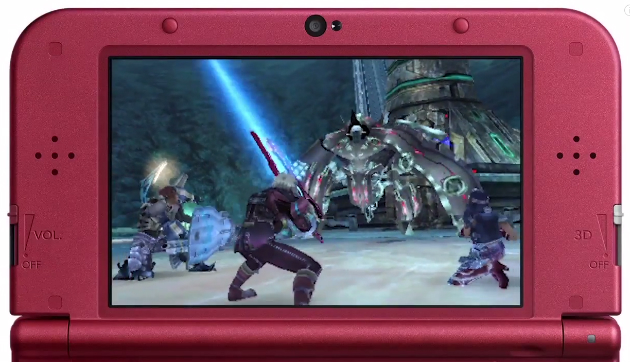 Xenoblade is a revenge story of Shulk and his friends as they try to commit genocide to the Mechon, a race of machine-like life forms, while learning the secrets to a sword called the Monado. All of your party members have something to prove and someone to kill, and funny enough the story doesn’t get much deeper until the crazy ending. It’s actually a good thing since the amount of time you explore the areas (more on that later) is so grand that any small details would be forgotten once you get to a continuation of it. Final Fantasy XIII, and its encyclopedia of crazy terms or events must be read before you remotely understand, this ain’t.
The combat for Xenoblade feels very Western as if you’re playing a Dragon Age or Star Wars: KOTOR. When you start a battle, your character auto attacks when they’re in range of the foe so you can focus on Battle Arts. This is great because these attacks have a heavy focus on your placement to the enemy, for example Shulk’s Back Slash does more damage if he’s behind them. Auto attacks also refills your character’s Talent Arts, like the power of Shulk’s Monado if you’re playing as him, opening various unique abilities. The game doesn’t punish you for losing your entire HP, allies can revive and vice versa, and failing the fight only teleports you to the closest landmark. Xenoblade’s combat runs deeper with Shulk’s visions, where you can see an enemy perform a deathly move and have the ability to prevent it by changing up the enemy’s agro or healing/shielding the ally so it won’t KO them. It’s one of the most fun combat systems that does what you don’t need to do and allows you to focus on the bigger parts. 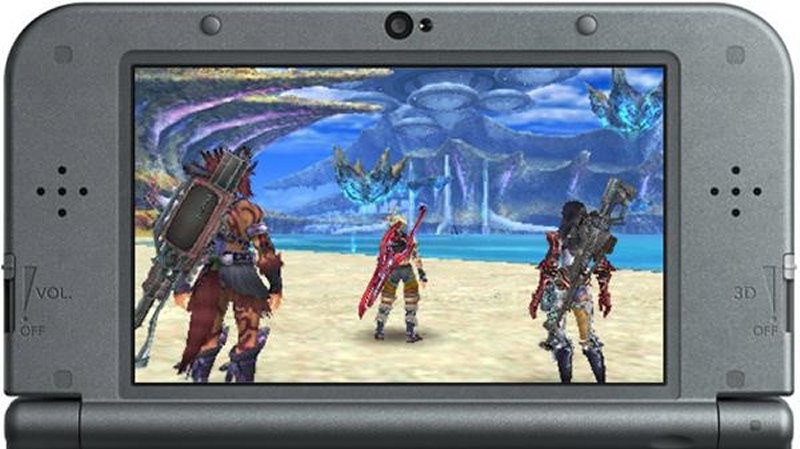 The game takes place of the corpses of two dead gods named the Bionis and Mechonis, where both biological and mechanical life bloomed respectfully. This factoid needs to be mentioned because just like a germ, you traverse these gods’ bodies from the Bionis’ foot to knee to lung to head right to the Mechonis’ body, and each area is very much inspired from that body part. It’s really cool to walk around an area and seeing it click when you realize you’re on the thing’s shoulder or arm or the sword that stabbed the Bionis and links the two giants together. There’s a sense of scale with Xenoblade unlike any other RPG since you explore it vertically, and each locale is very multi-layered. Added to the exploration is the game’s day/night cycle that can be changed to any hour at anytime, so ‘when’ is just as important to questing as ‘where.’ With all this exploring, traveling these mammoth landscapes would take forever to the point it’d be meaningless to backtrack, but thankfully the devs added a super useful warp feature you can use at anytime to transport to any landmark you stumble across.
The fauna your encounter on the Bionis can be very diverse. While they look like traditional monsters that something like an MMO would probable have, their levels are all over the place, even in the beginning. You’ll always see enemies around your level with your first go-around in an area, but you’ll also see things completely out of your league until you return at their level. Temperaments also vary, with many monsters being either docile or hostile (the latter only true when they think you’re in their level area), so exploring carefully is a must. If there was one thing that is lacking with the enemies are their attitudes towards each other, because you’ll never see monsters fight each other or Mechon.
Xenoblade was localized in Europe well before it came out in North America, so all the voice actors were British. Though it felt goofy at first, the voices in retrospect felt well done with a more diverse casting with multiple British dialects, and became a great change of pace to JRPGs that usually employ an anime-based American dub. To those who need the game in Japanese, be noted that the Japanese voice option was nixed to fit the data on a 3DS cart. 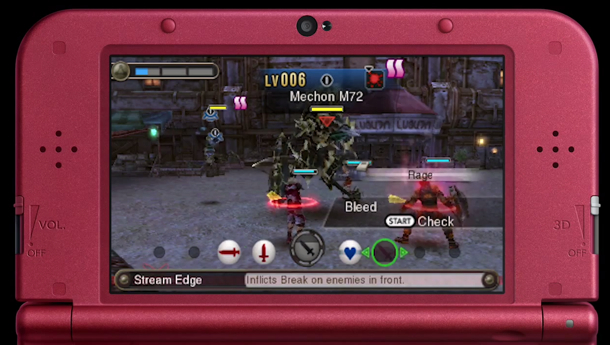 The other side of the audio, the music, is amazing from beginning to end. With a mix of rock and orchestra, several gems in modern gaming music were composed for this game, and still have me jamming out to them even three years later. Every dramatic, sad or happy moment were bolstered thanks to incredible song writing, while battles and exploration became more immersive the deeper you get through the story.
The transition to the New 3DS was an extremely smooth one. With the exception of the lack of Japanese audio, everything that was in the Wii version is still here. It graphically looks and runs the same, though I wished they’d upres a texture here and there from the old version… like Shulk’s blurry face. They did add the ability to unlock music to play while the system is either on or in Sleep Mode, as well as figures to gaze like in Dead or Alive Dimensions or Super Smash Bros. If you have Xenoblade on Wii, it’s worth the money only if you want to replay it on the go and want to take advantage of that new handheld like I did. Is it worth getting this one than the Wii one? With the prices the Wii one is going, $40 is the cheapest we’ll ever see the game in all honesty. It actually makes the 3DS one is a bargain since there’s extremely little compromise, and in some cases, it’s an upgrade playing it on the go.
Playing Xenoblade all over again was a joy, despite not being a full-blown remake like Majora’s Mask 3D. Though it was a copy/paste effort, Xenoblade Chronicles 3D is now one of the biggest RPGs to ever grace a handheld. It’ll take you at the very least seventy hours to get through it and over a hundred if you’re bound to help everyone in the game’s unique world from the hundreds of little missions to rebuilding a mutilated city. You’re doing yourself a disservice not playing it if you own a New Nintendo 3DS, but it’s also a good enough reason to upgrade if you haven’t yet. Now you can learn who that Shulk guy is from Smash, and he’s not as happy-go-lucky as you think.
Rating
9.5
Pros