My first thought upon finishing this book was, “Man DC is really ripping Vertigo off.” That is to say that the parent publisher finally produced a DC title that feels like a Vertigo book. The key things that support this statement? The book seems to have no tie to the regular DCU, it’s weird and very different and has very unique characters that wouldn’t normally fit in with the normal DCU.

Xombi is about David Kim, a man that has nanomachines flowing through his body. The nano’s have changed him into the perfect man. He doesn’t produce waste, doesn’t actually need food and his body will never age. He’s enjoying the discovery of his nano’s while watching Roger Rabbit with an old friend of his when he receives a call from a man with screaming coins in his pocket. His name is Julian and he’s running from something in Brazil when he calls David and asks him to head to a special prison. 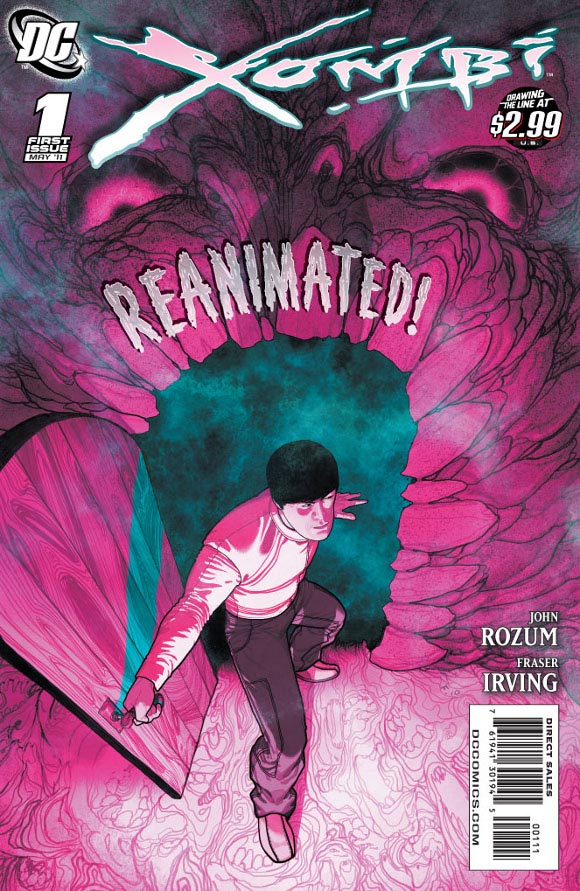 There David meets with Nun of the Above and Catholic Girl at the prison site. Nun of the Above is an actual Nun and Catholic Girl is an actually Catholic school girl, but both have extraordinary powers. They’re there to stop one particular prisoner from escaping, a man who only read one book in his life Dr. Jekyll and Mr. Hyde. After reading the book it made the man transform into his own version of Hyde only far more dangerous.

This book is very surprisingly good. I went in with no expectations and only the hype of the internet telling me this book was something special and for once they were both right. Writer John Rozum does a great job of introducing the world, the characters and introducing a mystery. David’s narration for the story is simple and informative. Rozum finds a balance between character exposition and background information that keeps the story interesting and doesn’t over complicated it.

The art is done by Fraser Irving (Batman and Robin) and is some of his best work to date. His style has really developed. It now has a lot more detail within smaller confines; in his previous work everything was big. The people were large and boxey so as to fit the amount of detail. Now he’s able to do a range of character sizes and keep the same amount of detail. He’s also rounded out his edges more which is good since it makes the style more appealing to the eye. He still maintains his unique color pallet which is perfect for the story. In general the art is very good and much improved since Batman and Robin or even Batgirl.

Xombi really surprised me with its quality and it’s something I haven’t seen from a brand new DC title in a long while. Their last batches of #1’s have been cheap cash in’s or failed attempts at re-launches. With Xombi it really feels like it’s a Vertigo title and part of me wishes it had fallen under that imprint. In the meantime though I will continue enjoying one of the best new comics of 2011 and if you’re lucky enough to find the first issue I suggest you grab it.