You Confront the Abstract Art: An Earthbound Retrospective

After waiting for so long, Earthbound, one of the most requested Nintendo games to be re-released, finally debuted on the Virtual Console. This is one of the quirkiest games ever put out by the gaming giant and not many knew about it until people were introduced to Ness in Super Smash Bros. Due to its failure to impress in America, Nintendo has been less than ambitious about resurrecting this strange franchise in the West. Earthbound never released in PAL territories and its GBA sequel, Mother 3, never left Japan. That’s why the announcement of Earthbound hitting the Wii U’s Virtual Console was met with such acclaim; it allowed Americans the ability to get the game without paying an enormous price on eBay and after eighteen years, European and Australian gamers were able to play it. Earthbound is about a boy named Ness who one night wakes up after a meteorite crash and runs into an alien once he reaches the crash site. The alien, called Buzz Buzz, came from the future to inform Ness to find three other chosen children and defeat an evil alien named Giygas in order to save the future. Gameplay-wise, the game is a traditional turn-based JRPG much like Dragon Quest, where battles are viewed in first-person. Earthbound however goes a step further and eliminates random encounters and shows which enemies you’d fight right on the field. Viewing the enemies allows you to position yourself to the enemy before the fight so that you can gain a tactical advantage like an extra turn, or avoid the enemy hitting you in the back which will result in losing your first turn. Despite much advancement the game did to the genre, I did get frustrated at some battles because the game makes characters miss attacks very often, resulting in turns of no progress or irritating losses due to chance. 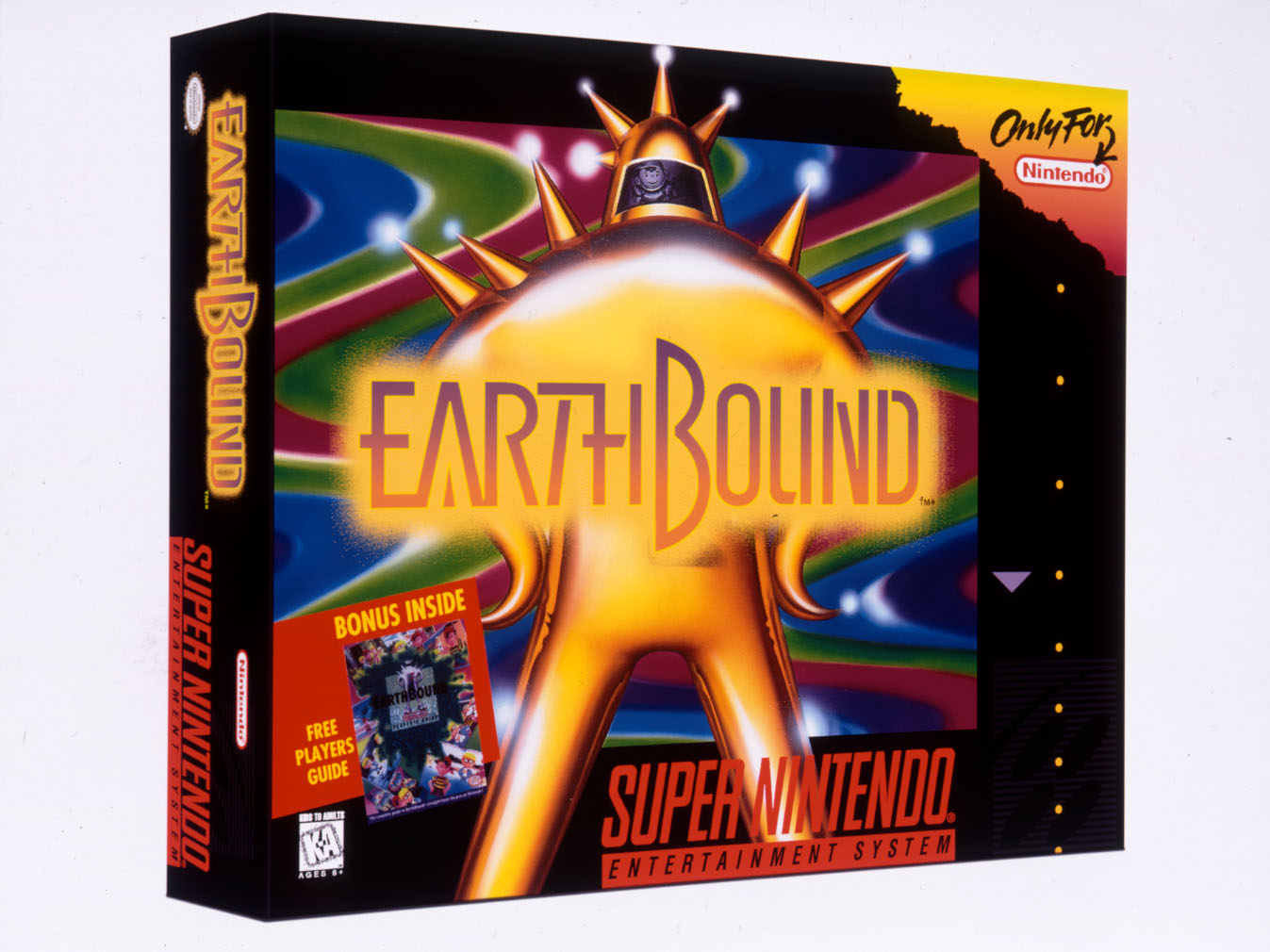 The SNES version of Earthbound was extremely expensive because it was bundled with an extremely well designed strategy guide that was really helpful. The guide had fake ads of the stores in town, wonderful pictures of figurines showcasing the enemies and various other characters. Each area is introduced with a newspaper from that particular location detailing events that are going on, that way you’re caught up on what needs fixing before walking in. The writers even took photos of real life areas and pretended that it was from the location that they were covering! The strategy guide was genius and really brought the locales to life, and luckily Nintendo scanned the entire guide and posted it on their site for players to read for the Virtual Console release. It is easily viewable with a PC, tablet or even the Wii U’s browser. The latter choice is nifty because you don’t need another device since you can browse the web during a game by hitting the Home button, select the browser and go to earthbound.nintendo.com/playersguide to view it right on the Gamepad and TV. Granted it can be pretty slow in contrast to today’s fast-paced Internet world, but it’s still 99% possible and usable. Unfortunately the last percentage, the scratch and sniff cards bundled in the guide, has failed to migrate flawlessly to the digital world.

While the original SNES game was rated KA (Kids to Adults, which was replaced with the E for Everyone rating), the Wii U version of Earthbound was rerated Teen due to the ESRB’s modernization of the game ratings. Games back in the day were rated on a much lenient scale, with only games with notable sex, blood, gore, and language getting slapped with Teen or Mature ratings and everything else would just get the KA rating. Earthbound was not the only one re-rated for a re-release either. For example, The Legend of Zelda Ocarina of Time for the 3DS and got bumped to a E10+ due to some newly added “Suggestive Themes” and “Animated Blood” descriptors, despite being the same game from the Nintendo 64 (its censored second edition no less) in terms of content. The thing is that Earthbound kinda deserves a Teen rating, especially in today’s rating scheme, because there are some pretty dark things that happen in the game. For instance, the second town, Twoson, had its residents on edge because a cult that took over a small village next door was kidnapping Twoson residents. You fight moles in the game that had blood on their mouths and claws. Giygas himself is pretty demonic looking to the point that it can bump the rating up, like in movies. There was also an enemy that was a noose with eyes called Nooseman, so there’s that.

I remember buying Earthbound from a mom-and-pop gaming store about a decade ago for $60 and not getting far in the game because I got motion sick from its trippy, psychedelic backdrops during battles and its terrible framerate when traversing the world. When the game was announced for the Virtual Console earlier this year, I sold my SNES copy and vowed that I’d beat it on Wii U since Nintendo said they slightly edited the game to prevent players from getting sick. Sadly that’s not the case because after a marathon session with the game last week, I was crippled with the worse case of vertigo and was bedridden for several days. Due to that horrific experience, I warn anyone that may have gotten dizzy or motion sick when playing games, especially during the SNES days, to play this game at their own risk.

Some are complaining about the price of Earthbound because unlike the traditional eight-dollar price tag for SNES VC games, Nintendo charged ten bucks. It is one of the most asinine arguments because not only is it much better than the alternative (I sold my SNES copy a month ago for $160), it is also the cheapest the game’s ever been. Those same complainers forget that Nintendo re-released the competed but unreleased American version of Sin and Punishment of the Wii’s VC at a premium too, and guess what… its success leveraged a sequel.


While it is far from perfect, Earthbound represents a Nintendo that we haven’t seen in a while, one who pushes every IP hoping to make the next Mario or Pokémon because they know if they do it enough, it will happen. It also represents the company itself since the programmer of the game was the current CEO himself, Satoru Iwata. But more importantly, Earthbound is simply a great game that’s worth experiencing, as long as it does not get you sick. And who knows, maybe its success will get us more installments.