You Missed That Issue?! Dinosaurs Attack! #1

I’m here to bring you yet another edition of ‘You Missed That Issue?!’  These particular features act as extended reviews of “obscure” comics containing spoilers.  The fact that it’s being written doesn’t guarantee that the writer loved the comic at hand, but more often than not that’s the case.  Here, that is definitely the case.  Dinosaurs Attack! #1 might not be on anybody’s radar.  Well, I’m here to change that.  You missed that issue?!  Well, here are my thoughts on Dinosaurs Attack! #1. 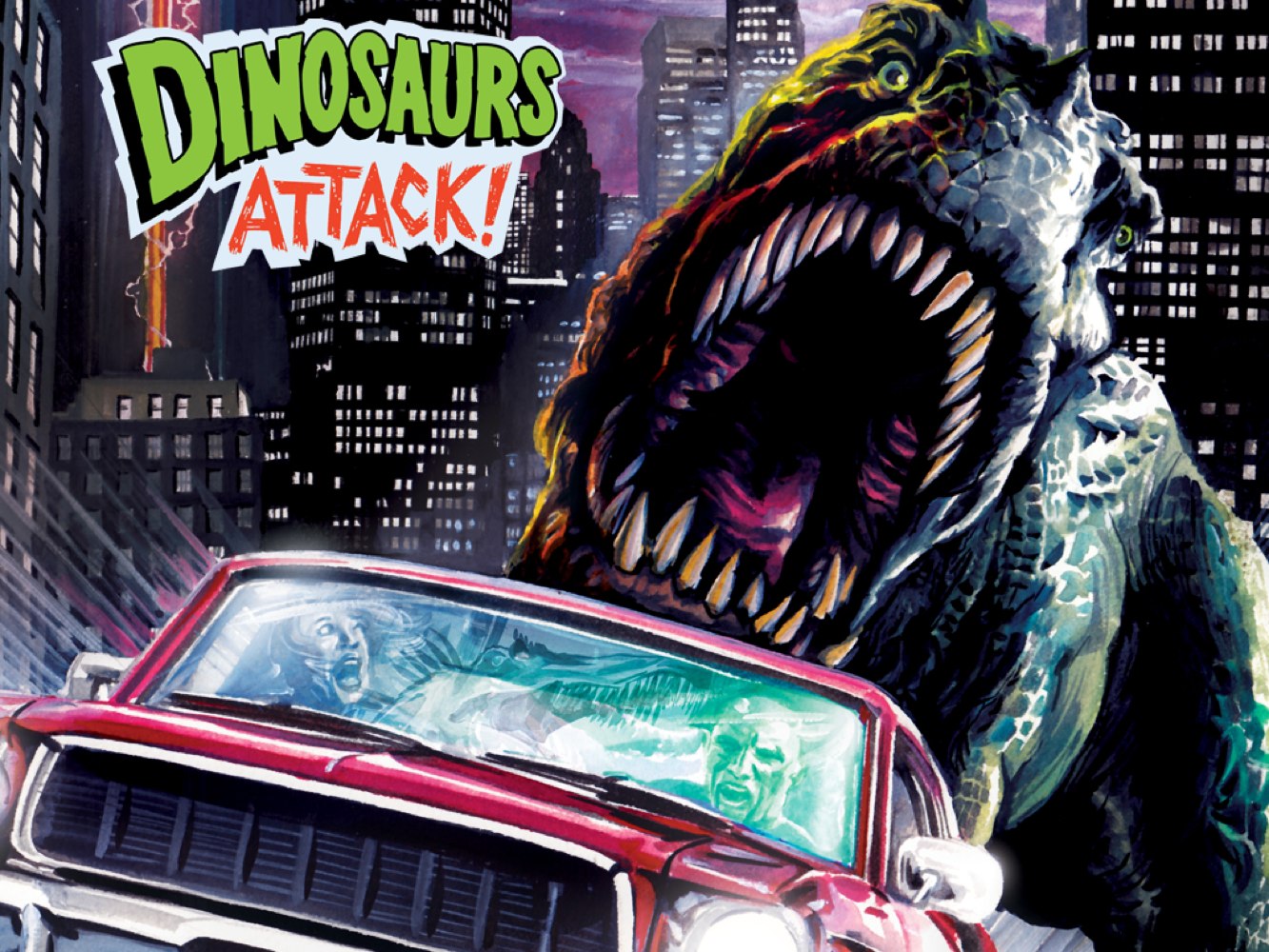 IDW Publishing has a reputation for reviving familiar titles:  Ghostbusters, GI Joe, Teenage Mutant Ninja Turtles—only to name a few, and Dinosaurs Attack! is adding to that reputation.  Its origins, however, are a bit more unconventional than the others.

In the late 1980s, Topps released collectable trading cards of Dinosaurs Attack! in an attempt to recreate the success they had in the early 60s with the ever-familiar Mars Attacks! cards.  Now, much like its predecessor, it’s being fashioned into a science fiction tale unlike any other you’ve seen or read before. 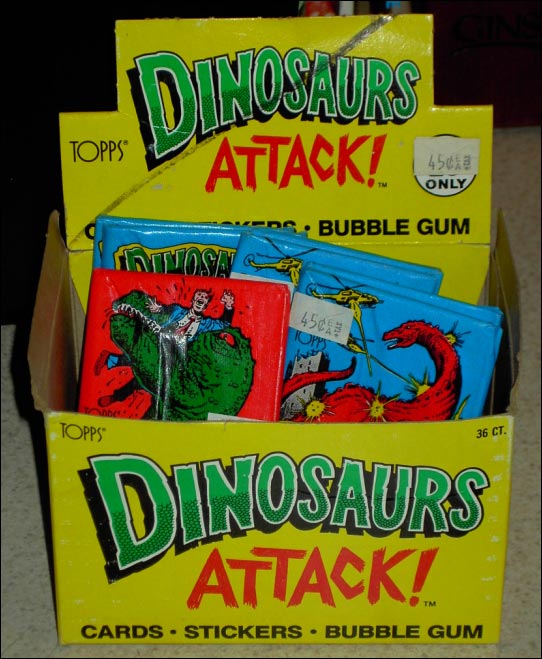 So what brings Dinosaurs here to attack our cities?  Quite successfully, Dinosaurs Attack! captures the buzz and excitement of a global community on the verge of groundbreaking scientific discovery through news broadcasts.  Simultaneously, the brain behind this disaster, Elias Thorne, and his ex-wife who also happens to be his greatest opponent, Helen Chambers, are introduced as the major role players in what quickly becomes a chaotic disaster.

The science (fiction) behind it all is fascinating.  Dr. Thorne has built a timescan beam on the orbiting space station, Prometheus, through which to study the origins of the planets.  The beam blasts the planet at hand and envelops it in an atomic energy that then displays that very planet in historically earlier forms—sort of like a time travel for spectators rather than travellers.  When the story begins, they have already successfully tested the beam on the moon, and the scientific rewards were great.

The opening news broadcasts cover the controversy and seeming imminence of a timescan done on Earth.  Reporters and scientists from around the world are being invited to Prometheus to observe this phenomenon.  And Elias Thorne, internationally renowned scientist, is hosting the event while Helen Chambers, quite renowned herself, is protesting it. 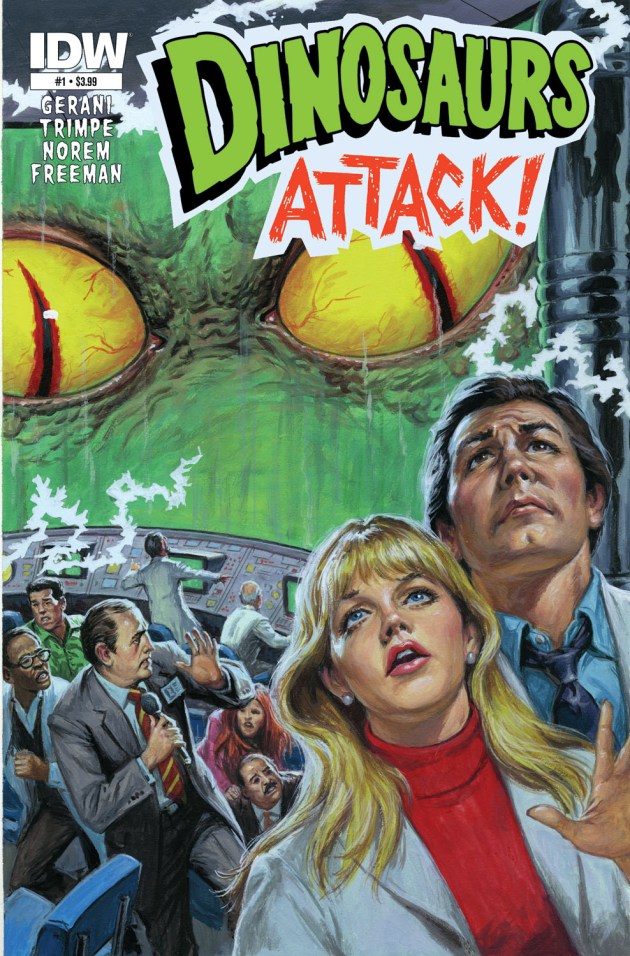 From the outset, Helen and Elias are established as our protagonists, with their previous marriage acting as a backstory for their current drama.  They have a ten-year-old daughter named Alice back on Earth, which we are told from the news broadcast, thus establishing their international celebrity.  Helen fears for the safety of her daughter and the planet as a whole, and Elias is obsessed with extending his research to even greater plains.

It’s interesting that in a story of global proportions, we only have two real characters.  My hope is that in future issues, we meet a much wider cast, as disaster and apocalypse stories lend themselves to an infinite number of character scenarios.  Also, it’s a bit on the anti-climactic side that the two main characters are up in outer space while all the action is right back on Earth. 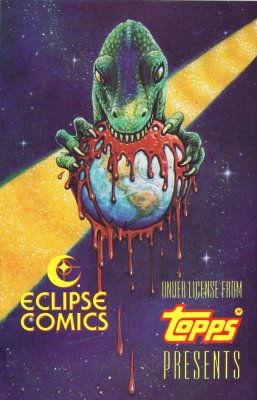 In what is most certainly an unexpected turn, Helen comes up victorious and influences delegates and politicians to rethink timescanning the Earth.  The event that has brought scores of important people up into space gets indefinitely postponed.

However, the title of the comic is Dinosaurs Attack!, not Dinosaurs Don’t Attack! so it’s clear the scan takes place regardless.  It seems that Thorne has a split personality with telekinetic abilities… and the rest is history.

The writer and creator of the comic, Gary Gerani, has made a bit of a name for himself in the world of horror.  He has written such titles as Bram Stoker’s Death Ship, and a comic book based on the late 1980s cult film, Pumpkinhead.  Clearly, he draws on preexisting material for his work. 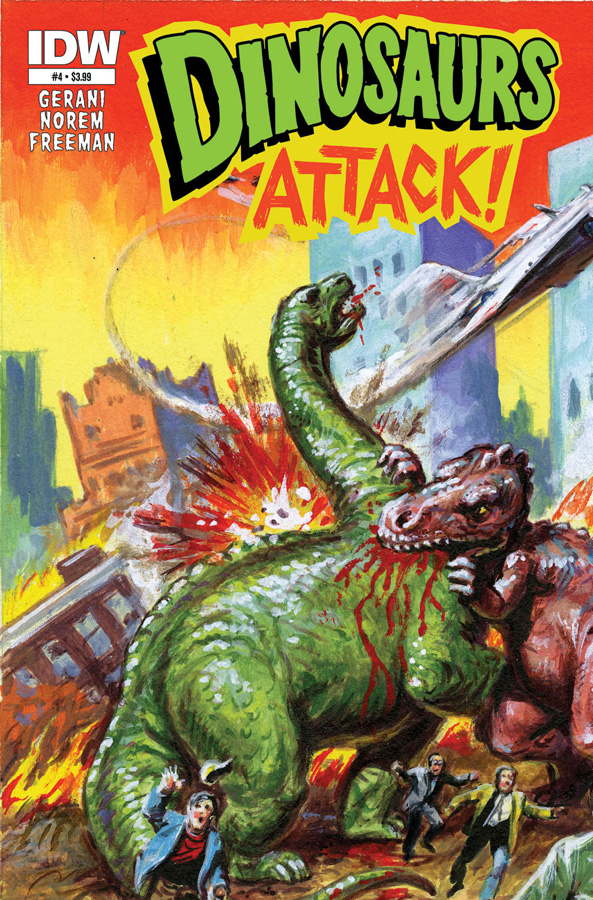 And with this preexisting material, Gerani does a pretty good job at capturing classic themes and tones from the originals.  When reading Dinosaurs Attack!, one can’t help but think of Mars Attacks, and the dark humor threaded throughout.  At one point, a guy listening to “The Monster Mash” while driving down Shore Road in Bay Ridge, Brooklyn drives right through a spontaneously materializing Tyrannosaurus rex, thus causing him to instantly age and then melt, flesh falling from his face.

And who better to render this horror than legendary artist Herb Trimpe.  Dinosaurs Attack! has a very classic look to it, as such material rightfully should.  The man has been illustrating comic books for half a century, with such titles under his belt as The Incredible Hulk and X-Men­, all done in the 1970s. 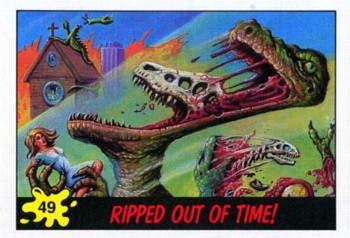 Dinosaurs Attack! is a comic that, pretty obviously, is intended to be as ridiculous as it sounds; there is a self-awareness in the writing and in the artwork that displays this.  Perhaps the absurdity of the title—what I believe to be nothing short of great in a Snakes-on-a-Plane sort of way—might turn many would-be readers off.  I assure you, it’s every bit as amusing as it sounds.