I have to admit, I’m almost at a loss for words.  This is one of those feature articles called, “You Missed that Issue?!,” in which I take a close look at a comic that I find either odd or obscure.  This one in particular happens to be both.  It is odd for obvious reasons, and obscure because, quite frankly, I’m having trouble imagining what the target audience for a comic like this might be.  With that said, and while running the risk of contradicting myself, I think I might be part of that target audience because when I saw that Mars Attacks Popeye existed, I instantly needed to read more.

Yes, you read that correctly.  Mars Attacks Popeye is real, and for those of you who might be unfamiliar with one or both titles, it is a crossover between Mars Attacks! and Popeye the Sailor Man.  It was released by IDW Publishing in January of this year, and I’m appalled that it managed to elude me for this long.  You missed that issue?!  Well, not for long!  This is Mars Attacks Popeye #1 with SPOILERS to follow. 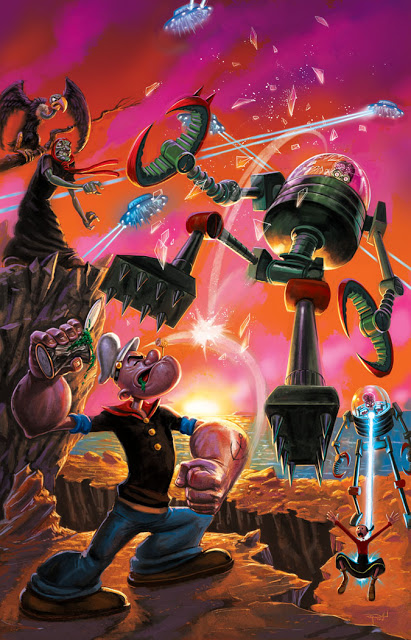 Mars Attacks! began as a series of trading cards released by Topps in the early sixties.  In my last edition of “You Missed that Issue?!,” I reviewed Dinosaurs Attack!, which is an adaptation of a later line of Topps trading cards from the eighties.  The Dinosaurs Attack! cards were part of an effort to relive the success enjoyed a couple of decades earlier by the popularity of Mars Attacks!.  And that popularity lives on.  In the late nineties, Tim Burton directed a live-action film adaptation that captured the comedic violence of the cards brilliantly.

Popeye goes back a bit further.  Started as a comic strip in 1929, Popeye quickly became a household name and by the mid-thirties, it was its publication’s most popular and widely read title.  Eighty years later, cartoons, comic books, and live-action films have helped elevate the spinach-guzzling sailor to the level of Charlie Brown and other classic characters that are, more or less, universally known. 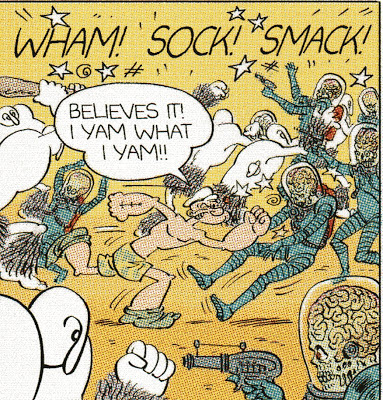 Okay, so on one side you have a fist fighting sailor and his blue-collar family.  On the other, you have Martian invaders who, as the title reveals, “Attack!.”  Doesn’t quite seem like a fair fight, does it?  Well, it’s a comic book; get over it.  Not only that, but there hasn’t been a challenger to date that Popeye (plus a can of spinach) hasn’t been able to punch the crap out of.

There’s no question about it, Mars Attacks Popeye is primarily a Popeye the Sailor Man comic with a flashy antagonist—or so it appears.  Actually, the infamous Sea Hag, the longtime nemesis of Popeye, has summoned the Martians with what appears to be some sort of crystal or gem.  No other explanation is provided.

Note: a lot of the major plot points work that way and, again, it’s a comic book.  I’m stressing that, not because comics don’t require well thought out plots, but because as it is primarily a Popeye comic, it reads like an extended comic strip, placing more emphasis on jokes and punch lines. 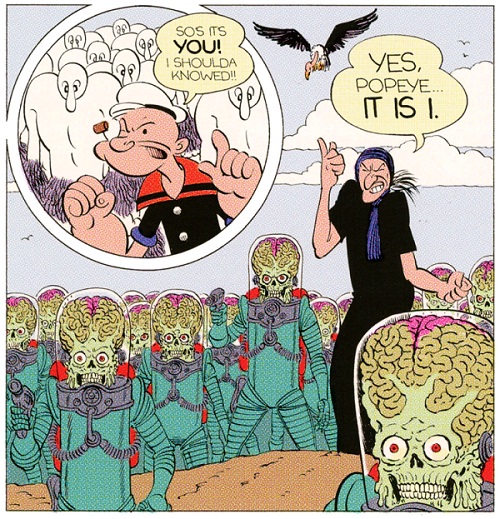 But how do they reconcile those blasted ray guns?  If you were to take a gander at some of the art from the Topps cards, or a few scenes from Tim Burton’s feature film, then you’d see just how much damage these Martians are capable of inflicting.  In Burton’s film, they destroy the majority of the planet.  Along the way, those ray guns display their extraterrestrial power by melting the flesh away from once living human skeletons.  How can Popeye punch the crap out of that?

Luckily, Dr. Wotasnozzle, the town genius (there’s a tool for every job in the town of Sweethaven, apparently) has a plan. Jeep, the local dog with 4th dimensional powers (tool for every job), slips through some dimensional crack and lands inside the Martian ship where he’s able to steal one of the ray guns with ease.  Wotasnozzle studies this gun’s omega-wave frequency and manages to craft a device that lightens the blast.  Instead of melting flesh and burning bodies, it zaps only the victim’s clothes, leaving them naked. 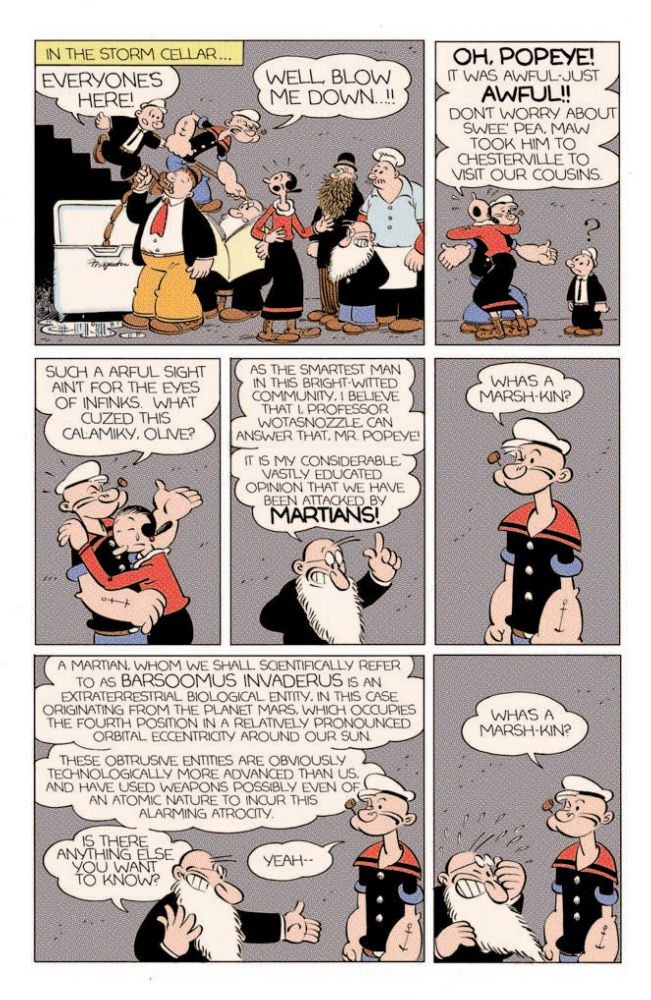 With the help of a Goon army, courtesy of Alice the Goon (not the most politically correct depiction of aboriginal peoples) a naked Popeye and his Pappy manage to punch the crap out of the Sea Hag and the Martians.  And of course, when it looks like there’s no hope left, Popeye eats a can of spinach and the fists really start flying.  Easily, Mars Attacks Popeye is the most bizarre comic I’ve ever had the pleasure of reading.

The writer, Martin Powell, has a bit of a history with Mars Attacks!, as he has authored more than one of the revivals from IDW.  He seems to specialize, although not exclusively, in revivals, having more than one Sherlock Holmes title under his belt along with Dracula and a few others.  I can certainly see why he’s the man for such jobs, as he managed to stick to a classic Popeye-type telling of the story despite the obvious challenges at hand.

And in continuing my praise of the classic Popeye feel of the whole thing, Terry Beatty’s artwork is what drives the point home best.  There would have been two, once very separate, fan bases for him to contend with if he didn’t get the art just right.  Going in a primarily Popeye direction, the Martian attack looks as if it could have been depicted by the original creators.  It was a job well done. 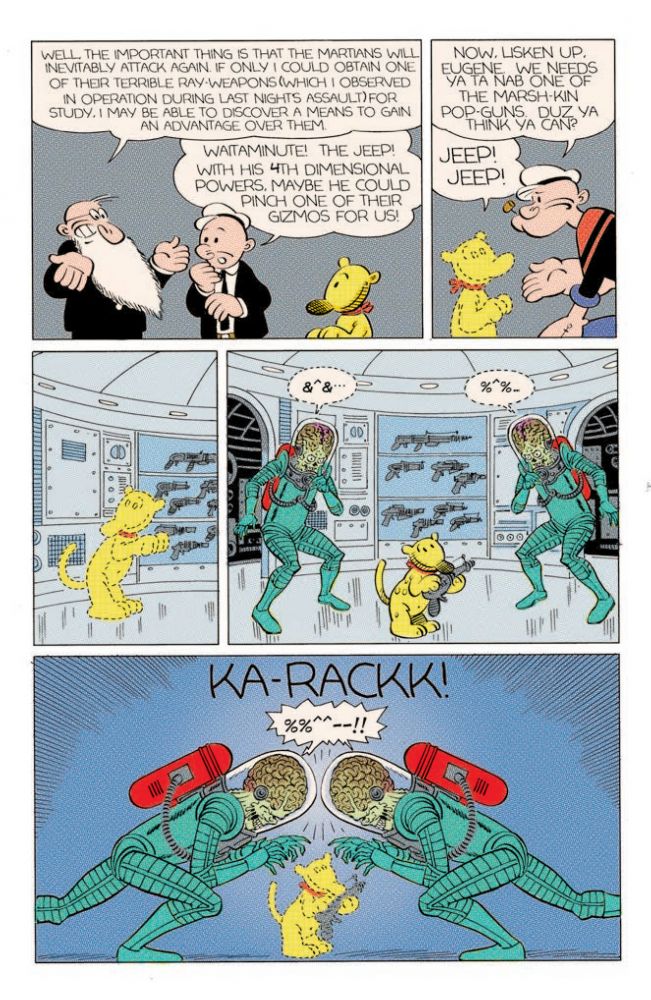 I can really only cross my fingers and hope that IDW has more of this sort thing in the works, what with all the titles they own the rights to.  If there are more out there, then I will make it my personal mission to bring them to you.  In the meantime, go out and read Mars Attacks Popeye.  It’s too crazy to miss.