Welcome to a new series spotlighting some of the best single issues in comics from the past decade. You will not find Watchmen, Sin City, Dark Phoenix Saga or Action Comics #775 anywhere on this list. These are comics that, with a little effort, you'll find on the Internet or lost in the back issues of your comic book store. Because this article is not a review, and since these issues are not necessarily new, any surprise, cliffhanger or death will be spoiled in an attempt to show why the book shouldn't have been missed.

Back in World War II, the comic book world joined the fight against Nazis by making their heroes join forces and fight the good fight, this led to the creation of one of comics most memorable characters: Captain America. Time passed, the world forgot about Cap fighting the good fight and he became just another do gooder, superhero. But in 2001, it was time for a new deal; the world trade center was knocked down by terrorist, the homeland security was breached. The comic book world could not stand idle, they stood up and answered the call. 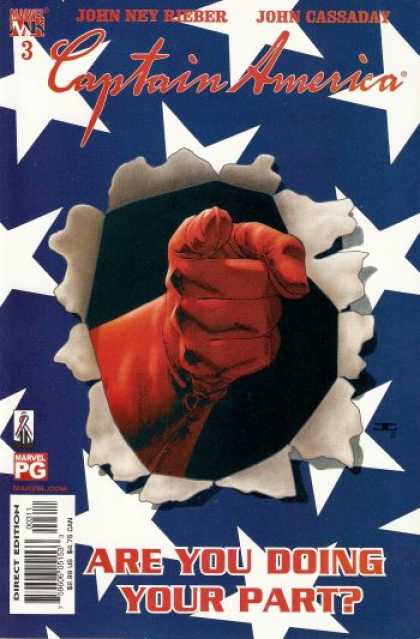 So did Captain America a true patriot, defender of freedom and protector of peace and justice. It was Steve Rogers reaction to this situation that readers could relate to as we saw Rogers, give a look to the camera that looks like a man that had seen a piece of hell and is tired of the injustice and the evil that men do. World War Two was over but these attacks could spawn world war three. So when we looked at Steve Rogers looking at the camera we knew that this was a man mad as hell and you are damn right, he is not going to take it. Memorial Day was last Monday, but this being a week about honoring our fallen military heroes, it is only fitting to do this feature on Captain America, with one of his most interesting stories; just incase you missed that issue: Marvel Knight's Captain America # 3.

MK's Captain America #3 represented a transitional period for Captain America. The image of a smiling boy scout was transformed into a tough as nails soldier. No longer was this the Captain for kids, here was but a man that was born in war. But he didn't fight because he loved killing because he knew too well that if necessary he'll have to do it. He fought because he loves life. Because he knew that the super soldier serum meant more than just being a living weapon. Steve, carried the burden of being the defender of life. The attacks of 9/11 was a devastating blow for everybody. The war on terror was given a genesis and Steve was helpless to stop it.

Now a new group of terrorist decided to bomb a town in middle America, killing over six hundred people. Then in a church full of bombs, they held ransom two hundred more people and forced a news reporter to bradcast their message: " we are here waiting for Captain America, the man known throughout the world as the defender of the American dream to die."  Cap anwered the call and Shield provided the transport. They told Cap about the "Cattags" a new kind of dogtag, that can help monitor the soldiers activities including vital signs, all the terrorist wore the Cattags. Cap landed on the battlefield defeating all the enemies as he moves towards the church. Rogers didn't have any problem kicking terrorist ass, until he was force to fight children. So starts the beginning of Enemy chapter three "Soft Targets" 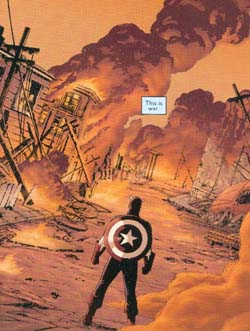 Captain America refused to fight these children as he shouted "we don't make war on children" these words did not reach any of them as one of the children became a human bomb. Cap used his shield to save one of the kids. This kid realized that Cap is not the enemy and let him go. The terrorist leader Al-Tariq revealed that the people in the church are bomb manufactures. He looked at the camera and replied " I'm not a terrorist, you are the terrorist. When innocent Americans die -- it's an atrocity. But when we die, we are collateral damage." as he kept talking to the camera the timer on the bombs activate.

This left Cap with only ten seconds to stop Al-Tariq from detonating the bombs; as Cap races against time with only one second to go. Cap knew that he, as a man could only pray; but he as a soldier could only strike. Captain America punched Al-Tariq so hard that he broke Al-Tariq's neck, instantly killing him. Thus saving the people from the bombs. Cap was not happy by that fact, he was tired of the vicious circle of war, he faced the camera, and as he looked directly into the camera's eye he spoke, " I need to say some thing to the people. Where I stand, I don't see war. I see hate. I see men and women and children dying-- because hate is blind. Blind enough... To hold a nation accountable for the actions of man. I can't be part of that. After what I've seen today America didn't kill Faysal Al-Tariq." Captain America then proceeded to take his mask off and say: "I did." with a powerful image of a tattered Steve Rogers looking at the readers as the issue ended. 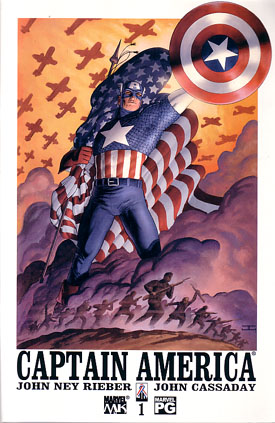 The story continued with Cap fighting a bigger threat and discovering that Shield wanted the Cattags. We see that everybody carries responsibilities in these vicious war games, but the true culprit of it all is hatred. The creative team of John Ney Rieber (Books of Magic) and John Cassaday (Planetary) delivered a ground breaking story arc that dealt with Cap facing far too real world of terror, corruption while at the same time he tries to preserved the ideal of justice for all and the preservation of life in it. No longer we see Cap in a world of black and white, but a world full of greys. The whole six issue story arc is a beautiful piece of art and issue three is the chapter that carries all the emotional substance this series brings. The cinematic approach this book has is so amazing it feels like your watching this in an IMAX theater. This is a regal book of emotions that readers can't help but live through every panel this chapter has to offer. Overall, this is a fantastic piece of work, that captured the feeling of an era just like it did back in world war two.

Sadly after years the book was kept in the back catalogs of the Marvel U. Although the book sold well, it now lives in the shadow of Ed Brubaker's defining run on Captain. The phenomenal run of Brubaker has brought new life to Cap and new fans as well. If you missed the issues before Brubaker became the architect of Cap's adventures, you might want to get the new hardcover edition named the New Deal. If you are a back issue hunter go look for Marvel Knight's Captain America #3 and remember don't miss this issue.