When Jason Reitman and Diablo Cody struck gold with Juno in 2007, they did so with a rare combination of contemporary wit, quirkiness and heart. Their four-year reunion in Young Adult won’t be nearly as heralded, but it might arguably be a better film.

Although ironic when juxtaposed with its main character, a 37-year-old who hasn’t gotten over her high school sweetheart, Reitman and Cody display obvious evidence of maturation. The subject and humor are decidedly darker, and the emotional energy more raw and challenging.

Charlize Theron stars as Mavis Gary, perhaps one of film’s most hopelessly pathetic protagonists. Before giving the opening credit sequence its cue, Reitman puts Theron to work and paints a clear picture of spiraling drunken loneliness, reality TV and apathy toward responsibility. Appropriately, she’s a young-adult fiction writer for a dwindling book series who’s also a former prom queen. Theron is perfect for the role with her combination of in-concealable beauty and dramatic prowess. Mavis never becomes a caricature under her watch. 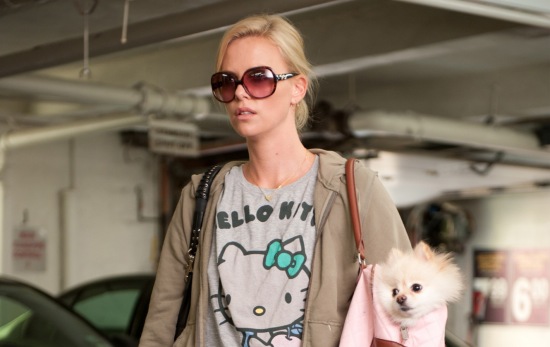 Unable to get past the fact that her high school boyfriend Buddy Slade (Patrick Wilson) just had a baby, Mavis flees her depressing cyclical lifestyle in Minneapolis for her home town of Mercury, Minn. with the intention of winning him back.

Mavis’ delusional and deceitful quest to be a home-wrecker proves maddening through much of the film at the slow-burn pace Reitman has dictated, and it becomes obvious that at some point the bubble on her misguided journey will burst into an ugly mess. Yet despite this foreseeable direction, the climax proves stirring and not without a set of surprises.

Adding to the complexity of Mavis reclaiming her past is Matt (Patton Oswalt), a former classmate she barely noticed because they were miles apart on the social spectrum. The two bond over their appreciation for (or dependency on) bourbon, and their relationship allows Theron’s character a chance to blow off steam, albeit irresponsibly.

Mavis eventually remembers Matt as the “hate crime kid” because he was brutally beaten to the point of being disabled in high school at the hands of some jocks who thought he was gay. He serves as a strong comparison point for Mavis’ high school experience throughout the film. Oswalt’s wit also matches well with Cody’s style and Matt actually turns into one of the better depictions of a disabled character probably ever. Other than the incident that caused it, we’re not asked to sympathize excessively with his condition, nor do Mavis’ snarky remarks about it come across as rude. 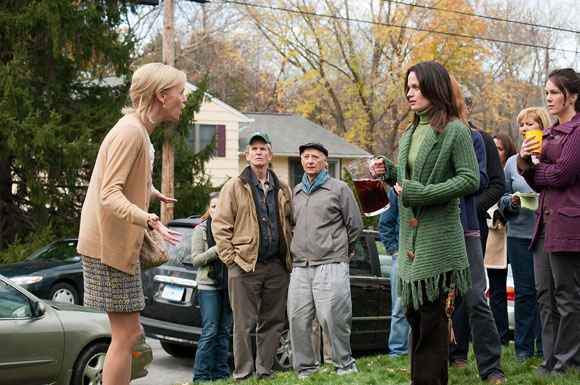 Cody’s dialogue is much more restrained this time around; “Juno” is eons funnier as a result, but the sacrifice of laughs allows us to focus on the film as a character study of a woman who hasn’t quite learned how to be an adult. The script’s only deficiency comes from a crater-sized hole in Mavis’ history. “Young Adult” deserves praise for being a film about living in the past that contains not a single flashback, but knowing more about Mavis’ divorce and how she came to break up with Buddy the first time could have significantly informed the story, especially as to why Mavis willfully lives her life as the trainwreck it clearly is.

The film’s climax helps a bit in this regard, and Mavis’ epiphany avoids being cliche despite the obvious “appreciate what you have” motif. Part of the message oddly suggests that small-town folks lead purposeless lives for the sake of achieving some kind of blissful stasis, but at the same time the idea that all of us are broken people that need to affirm and trudge forward — not backward — with our various blemishes, will surely resonate.

Rating: 8/10 Young Adult Directed by Jason Reitman Written by Diablo Cody Starring: Charlize Theron, Patrick Wilson, Patton Oswalt Other Player Affinity Reviews John thought: "I'm one of those heartless individuals still bitter that Diablo Cody won an Oscar for her turgid Juno screenplay in 2007. But honest to blog, her work in Jason Reitman's latest is the highlight of the film. This kind of writing only comes from someone who's clearly matured over time. Gone is the insufferable snark. Instead, she focuses on genuinely developing her very unique characters. Young Adult is funny, but in a very dark way. The tone is consistent, and the performances (especially from Charlize Theron) are on a level that ensures you're consistently engaged, even if you aren't overtaken by any sort of emotion." Rating: 7.5/10 Player Affinity Composite Rating: 7.8/10
Rating
7.8