By: Justin Moody | Comic News | November 11, 2010
After six issues, Sean McKeever's (known for his work on Teen Titans) series Young Allies (part of the Heroic Age launch) has been cancelled due to lack of sales, with the solicited issue seven never going to print (although McKeever did mention on his Twitter that it was still only in plotting stage, there is no "lost issue").

At the back of the last issue, McKeever writes a letter that even though this series has been cancelled, he assures readers that this is not the end of the characters that were a part of Young Allies. His main mention is to next year's "Arcade" crossover between the worlds of Young Allies, Spider-Girl and Avengers Academy. Starting in November, Spider-Girl (formerly Arana) is going to have her own ongoing series and Nomad is going to continue to be in the back of the Captain America books, with no mention of what will be in the future for character's Toro, Firestar and Gravity. 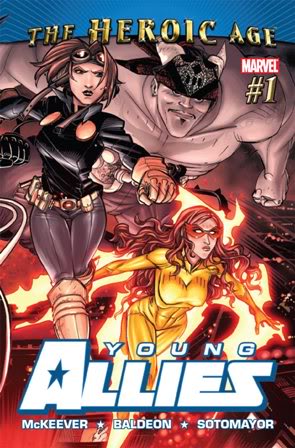