In the third issue of Marvel's Young Avengers, Kieron Gillen and the Jamie McKelvie/Mike Norton art team start us where they left us, with Teddy, Billy, and Kid Loki facing the imposing Laufey. This is all courtesy of Billy bringing Teddy's dead mom back to life. Oops! They're outmatched (no matter what a playful cameo by Heimdall and Volstagg might seem to indicate), so the boys are pretty enthusiastic about America Chavez's sudden intervention. Of course, Miss America brings her own set of parental problems to the plot.

Gillen again delivers a well-written book, one that reads like an exposé into the lives and times of teenagers who happen to be superheroes. Here we get Game of Thrones references while Billy updates the group on his text conversation with an off-screen Kate Bishop. What emoticons do you use for "need help saving the world"? There's also a flirtation with under-aged drinking, which the kids seem a little too comfortable with. No giddy giggling at breaking the rules? No "Mom would kill me if she caught me drinking, oh right, she's trying to kill me anyway"? Maybe parental possession makes you feel older than you are.

This issue balances banter and fighting better than the previous, with due time given to both. Gillen also proves that he knows when to use silence. Conversations are peppered with it, and the final fight benefits from it, with the artwork doing the heavy lifting. It's nice to see a superhero book utilize chatter and action. 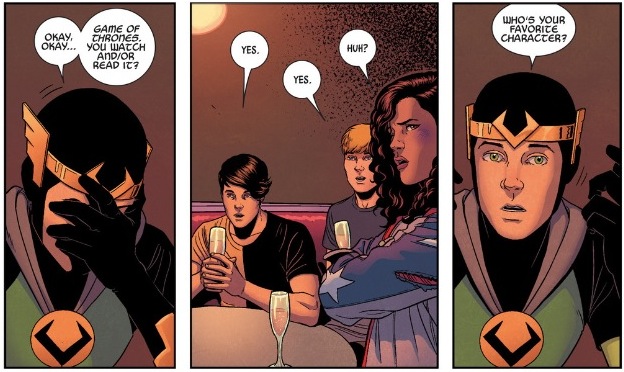 I did find the ending to be a little repetitive. The team is all but back where they started at the outset of the crisis, now with a few new faces. Sure, the stakes are higher, but how many times can our spunky heroes run away, get into a fight, and be recaptured by the same foes? And are we ready to get a little more insight into the creepy Stepford parents yet? Can they do more than shake their fingers and trap our heroes in weird goo? That said, the arc is far from over, so there are plenty of places for Gillen to take the story--and villains--from here.

McKelvie and Norton's art is excellent, and possibly even a little more fluid and expressive than the previous two issues. In particular, Miss America looks strong, gorgeous, and realistic. You can believe that she's ready to kick a god in the face. McKelvie and Norton also continue to find inventive ways to depict the world of Young Avengers. Though nothing stands out as much as the trap boxes from last issue, they aren't afraid to use shapes and colors to spotlight the main players. A nightclub fight is particularly good, with the heroes highlighted against the monotoned villains who not-so-coincidentally want to bring monotony to their lives.

In all, Young Avengers 3 is another strong chapter in the title's relaunch. Though the ending felt a little stale, I'm prepared to trust Gillen to bring us another exciting read next month.