In the latest Young Justice episode, our teen heroes find themselves unable to remember anything since before the team was formed.  This gives many of the characters the chance to “Do over” their first impressions, while also providing the audience with some missing backstory.  It’s a clever idea for doling out some exposition, while offering interesting character interactions at the same time.

As foreshadowed in last week’s episode, the team is off to the fictional nation of Bialya to battle the minions of the villainess Queen Bee.  We don’t actually get to see the Queen Bee in this episode aside from a still picture, but Justice League fans know the score, and the show will certainly go into further detail about Bialya in an upcoming episode. 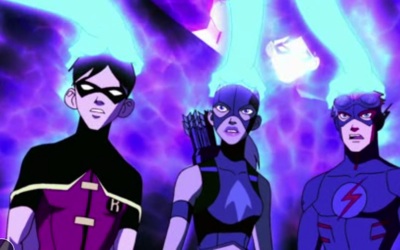 The memory loss plot element helps remind viewers that only some of these characters are former sidekicks.  Superboy didn’t even exists six months ago, so he’s become a mindless beast.  Martian Girl was, apparently an ordinary teen girl before coming to earth, which raises some questions about how Mars in this cartoon is difference from the Mars in the comics, in which J’onn J’onzz is the only survivor of his race.  Also pointed out is Artemis’ mysterious past.  It’s been implied before that she’s some kind of bad-girl-gone-good, and here she blurts out that the only plausible reason for her to meet Kid Flash is that she’s been sent to assassinate him by her Father.  Despite that, she and Kid Flash hit it off well in this episode.  At the same time, Martial Girl and Superboy have cemented their relationship, and the show seems to be approaching an end of the awkward romantic phase.

A problem with all of this is that Martial Girl is much too concerned with saving her boyfriend, and the rest of the team is a bit too forgiving when she ditches them in the desert with a dying Aqualad… 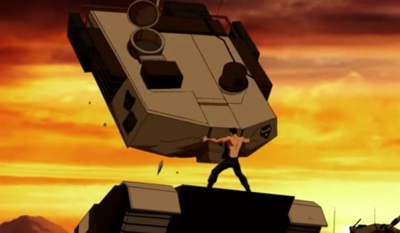 The episode does a nice job of providing some “My only weakness!” exposition; we’re shown that this new Aqualad will die if kept out of the water for too long, and we’re also told that Kid Flash needs to eat a lot in order to power his super metabolism.  Both of these nuggets of information are worked in nicely.  In the future we still need the writers to address Miss Martian’s weaknesses.  Is she super durable?  Does she have the traditional Martian vulnerability to fire that has been so inconsistent in the comics?  There a line of dialog about Superboy being indestructible, and so far there’s been no mention of kryptonite on the show, or any talk of how he’s affected by magic, so the full extent of Superboy’s powers must still be addressed in some future episode.

On the line of Superboy, he gets to cut loose in this story; the team is fighting tanks and (Unmanned) planes is several scenes, as opposed to punching invulnerable villains, so there’s lots of stuff blowing up, and Superboy gets to go all Hulk and rip tanks apart with his bare hands.  Later, Martian Girl does the same when she faces off against Giant-Exposed-Brain villain Psimon.  This is handled well by the Director, the psychic duel is just as exciting as any of the action taking place in the physical world.  Direction, on the whole, is quite good in this episode (Did you notice that Miss Martian’s memories are always in the first person perspective)? 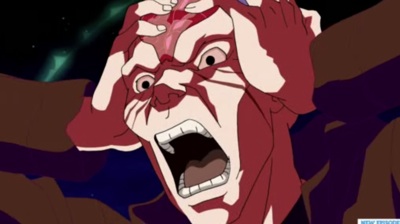 This episode was the first one that stumped me in the “Name that obscure character” department; I have no idea who/what the alien ball is, and I’m looking forward to this touch of mystery.  Another mystery that’s starting to become clearer, though, is the villainous cabal who call themselves “The Light”.  Although we’re still left with much to guess about, the audience has been handed some overt foreshadowing that “The Light” is working with DC Comics’ Ultra-Villain Darkseid.