The first six episodes of this season served to introduce the members of the team, their enemies, and mentors.  Every story performed some important function in terms of establishing the foundations of the series.  Eventually every superhero show will have to get down to the business of the team’s everyday war on evil and, unfortunately, this means that most shows will end up doing a few filler episodes where nothing tremendous happens.  Such was the case with this week’s episode of Young Justice: Denial.

This week, the team is trying to help Doctor Fate, or rather the Doctor’s alter ego of Kent Nelson.  One thing I like about the show is that they bring in new characters from the DC Universe in every episode, and this time around we get good look at the often-neglected world of the supernatural as it exists in the DC Universe.  Too often super-hero shows focus on aliens, robots and mutants, while forgetting about the many evil wizards who are up to no good.  Mixing the supernatural with sci-fi requires the audience to have a strong suspension of disbelief, but it’s required to enjoy work set in the DC Universe. 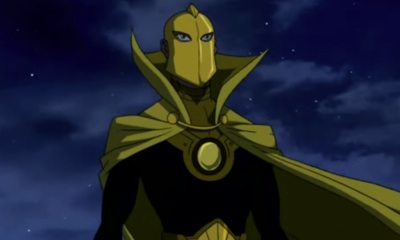 This is why Kid Flash’s skepticism seems out of place in this episode.  He lives in a world where magic is real.  In previous episodes, he’s been face to face with Zatarro, Wonder Woman and Captain Marvel; all of whom have magical powers.  He isn’t denying the work of a televangelist faith healer (Or a gypsy séance), he’s denying what’s right in front of him.  The writers try to pass this off as him promoting Arthur C. Clarke’s notion that “Any sufficiently advanced technology is indistinguishable from magic”, but it just makes Kid Flash come across as the guy who’s always suspicious of whatever new thing is introduced in each episode (Remember his immediate hostility towards Artemis last week).

I share Kid Flash’s skepticism and mistrust, and I’m a little suspicious of some of the design choices on the show.  Specifically how some settings and objects seem a little too “Toyetic”, meaning that they’d be readily adapted into a toy or video game.  As soon as I saw Superboy and Aqualad fighting on the holographic battle disk, I immediately thought “That will be turned into a video game”.  As of this writing, it hasn’t happened yet, but keep on the lookout for Young Justice Holo-Area Battle on your XBox in the future. 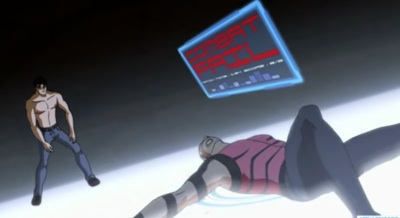 Another major problem with this episode is the fact that Doctor Fate saves the day.  None of the characters who actually star in the show defeat the villain.  One might argue that Wally heroically overcomes his doubts in the climax, but the episode still ends up with the whole team being walloped, and Wally just observing a more powerful hero stomp the bad guys.  During this big climactic fight, we’re led to believe that some sort of mighty battle occurred between the rest of the team and Abra Kadabra, but we don’t get to see this actually happening.  This makes our heroes seem very ineffectual, and it deprived the audience of what could have been a great action sequence.  Again, it’s only through Doctor Fate’s intervention that Superboy is able to bring down Abra Kadabra at all. 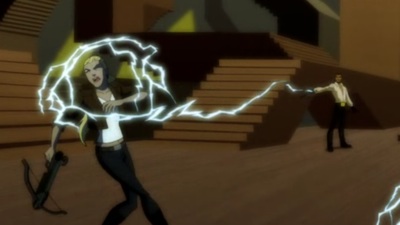 I will give this episode credit for taking a huge step in declaring that Young Justice is a show for older viewers; it has a character die on screen.  Granted, it isn’t a violent death, or a gruesome one, but you won’t see that happen with the Superhero Squad, or The Avengers, so if nothing else, this episode earns its keep for tackling mature subject matter.  This alone, however, doesn’t make up for Denial’s numerous flaws.

Read our review of the next episode Downtime.