This week’s episode of Young Justice focused on the new Aqualad, and turned the show’s spotlight on the comings and going of Atlantis, along with how the various members of the team spend their time when not fighting evil.  Fans of Aquaman and his submarine kingdom will most likely take some extra enjoyment from this episode and the many Aqua-cameos.

The show starts with a cold open in which the team is defeated by Clayface, then rescued by Batman, and right off the bat we have some questions.  Specifically, how does a third-string villain like Clayface defeat the whole team? Yes, it’s always fun to watch Batman crash through a skylight and beat up a villain but, within the logic of the story, it doesn’t make sense.   I will give the Director credit for the shot which has Clayface reflected in a shard of glass as Batman comes crashing in.  That’s some fine Bat-action.

Once we’ve made it through the opening, we start to learn about this new Aqualad character, Kaldur.  He’s one of the characters created just for this series, and viewers don’t know much about him, particularly how he fits in with Aquaman’s continuity, and the Aqualad from the comic books.  There’s some quick and clever exposition to provide the basics about how Kaldur became Aqualad. This is all handled well, and by the end of the episode, the audience has a very good grip on who this new character is.  Some of the upcoming plot twists about him have already been leaked online, but viewers who just tune in to watch the show are in for some fun surprises about Kaldur. 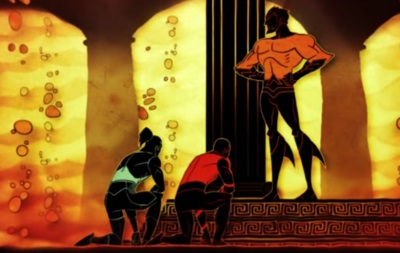 A small complaint that I’m sure I share with many comics fans is that the episode makes the original Aqualad from the comics, Garth come across as something of a loser.  The writers do need to establish that Kaldur is the “Real Aqualad” in terms of the show’s continuity, but I suspect there are hurt feeling among fans of Garth.

While Kaldur is off saving Atlantis from Black Manta, the rest of the team is enjoying a little time off.  There’s a funny scene with Superboy, Miss Martian, and Red Tornado, the three team-members who live at the headquarters.  Sometimes a bit of silence can serve to punctuate a joke, just as well as any punchline. Such is the case with Red Tornado walking in, then exiting without a word about the kids’ dinner preparations. There’s also a little gag about Miss Martian's catchphrase “Hello Megan” worked into the scene where Artemis is at home with her mom. 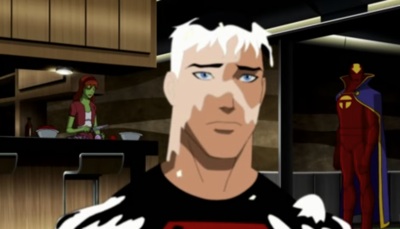 As for Artemis, she’s been quite the mystery for the past couple of episodes, and we’re finally getting to learn a little bit about her.  It’s been implied in previous episodes that she’s from some sort of tough neighborhood, and now we can see more about how hard she has it.  A contrast to that is Wally and his family.  We find three generations of Speedsters gathered together for a wholesome birthday party.  Oddly, this third-generation hero is the most normal of all the kids.  We also find out that Batman isn’t such a jerk after all; this version of Batman is a bit more nurturing than some other incarnations of the character, as shown both by his “Hand Eye Coordination” training with Robin, and the Wayne Foundation Scholarship for Artemis.

Aside from exploring Aqualad’s past, and showcasing plenty of action, the episode also introduces some elements to the overall story of the show.  I’m sure that DC comics fans can guess what that giant starfish is, and how it fits into Justice League history.  Then there’s that reference to the fictional country of Bialya which surely indicates that an upcoming adventure will involve the team taking on a certain villainess…

Find out what happens in Bialya with our review of the next episode Bereft.