Young Justice has returned. Okay, so it technically returned last weekend, but thanks to iTunes, many of us were able to see that episode already back around the time it was supposed to air. “Cornered,” this episode, is the first that is truly new to all of us.

The main thrust of this episode is an attack by Despero, a gladiatorial tyrant who has come to kick the crap out of Earth’s champions. Despero is one of the oldest Justice League villains in comics, appearing all the way back in that comic book’s first issue, but he’s kind of an unusual choice for this role. If you want a big alien tyrant with gladiatorial leanings, the character you’re most likely looking for is Mongul, another longtime DC villain. Yet, the showrunners appear to have made a conscious choice to use Despero instead and make him a bit more like Mongul. Does this mean they have something else in mind for Mongul already? It’s a possibility, but it’s also a possibility that they felt the addition of Despero’s iconic hypnotic third eye and L-Ron as an assistant would make this scenario more interesting. That’s reason enough alone.

So Despero seals off the Hall of Justice in an impenetrable force field and proceeds to have a cage match against those inside, whether they agree to it or not. Due to the destruction of their own headquarters a few episodes ago, some members of our young cast are present at the Hall to take part in the fun. Action has always been one of this show’s strengths. There’s no exception here. Since Despero dominates all comers, it may not be the best action ever, but it’s still damn good stuff to watch. 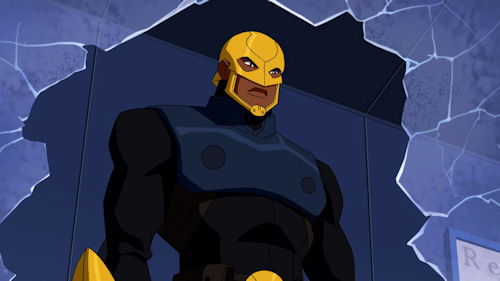 This is a major episode for Mal Duncan, who really has become one of my favorite cast members of this season. He gets in on the action against Despero, buying everyone time by gearing up in the old Guardian gear. It’s a good reference to his comic book history. Mal’s gone by multiple superhero identities in comics, and the first of these was as Guardian.

We also got a bit more of Mal and Bumblebee’s trainwreck of a relationship. I hope the show changes this up soon, because they’re getting real close to making Bumblebee unlikable for how she treats him. She’s obviously done with their relationship, but she continues to brush him off with excuses rather saying so. By the end of the episode, Mal does seem fed up with it, so we may now be on the verge of seeing things change for them.

This is also a notable episode for Miss Martian with the fallout of what she did in the previous episode. She’s clearly traumatized by what she did to Aqualad, which has made her gun-shy about attacking anyone else with her telepathy as she so often has done in this season. She’s a brain-eating junkie who has just hit rock bottom. Plus, we get to see the Martian Manhunter’s human form. I don’t remember if we’ve gotten to see that before. John Jones is black, as he tends to be in non-comics media. Too bad comics continue to portray him as a white dude straight out of the Mad Men era.

The B-story of “Cornered” deals with the Reach going public as benevolent visitors, painting the heroes into a corner when it comes to dealing with them. The Reach have successfully gotten ahead of the story and control the narrative. The Justice League really has no compelling evidence to show the public otherwise. It helps the Reach that Secretary Tseng is an idiot. I mean, come on. He’s the main problem with this part of the story. He’s practically tripping over himself to believe everything the Reach ambassador tellls him. It would have been better for him to be at least a little skeptical and ultimately won over by all the Justice League secrets the ambassador ends up exposing.

We get a little follow-up on the Reach’s abductees as well, and it’s just enough to confirm some fans’ suspicions. Yes, that is Virgil Hawkins. And yes, the rest of them are meant to be versions of the diversity club from back in SuperFriends. I’ll say more about them when we get an episode that really focuses on them more. 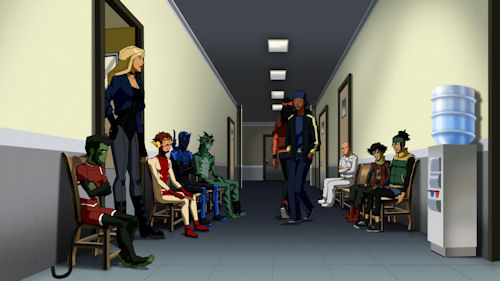 There are also a few little things that made this episode more fun. It’s great to finally see Billy Batson again, now that he has aged a few years into a gawky teenager. Nightwing setting the team up in a temporary in a crappy warehouse in Bludhaven is amusing and a nice touch to reference Nightwing’s comic book connection to Bludhaven. G. Gordon Godfrey has gone into full-on Glenn Beck mode. Black Canary continues in her role as den mother and counselor. It’s a lot of little fun things.

“Cornered” is Young Justice: Invasion’s much welcomed return. Despero gives viewers plenty of action to enjoy while other scenes deal with the quiet aftermath of what went down last episode. The Reach’s ability to sucker the world into believing them over the Justice League does push credibility a bit but not too much. On top of all that, we get some good character development for Mal Duncan, Miss Martian and for Blue Beetle, who does the admirable thing rather than listen to what the twin pesky devils on his shoulder tell him he should do. All this makes “Cornered” a good episode of the show to come back to. Hopefully, we won’t have to wait long to see the rest of the fallout from before the break, because I’m real curious about Aqualad and Artemis’ side of things.