Z-Girl: Odyssey #1 has many unique and enjoyable elements but has quite a few quirks that keep it from being a great title.  The artwork has an interesting style, but not everything is executed well with the story following suit.

Z-Girl and her four tigers, each possessed by their respective hosts which each control the standard element and a season.  After a particularly harsh mission involving armed chimpanzees, Z-Girl needs her rest before being briefed on something all-to-familiar to her. 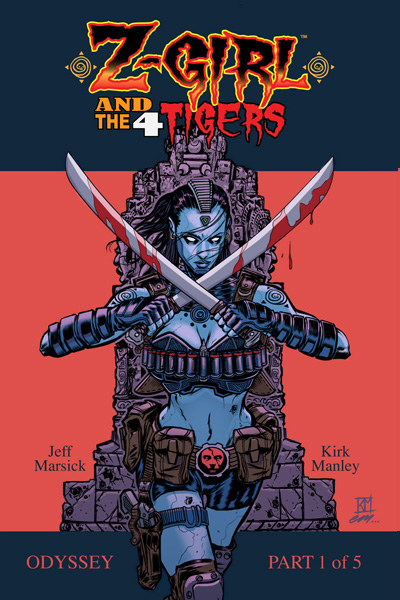 There are great mini-bios on each character, akin to a prologue for the comic, that are an interesting read and immediately show you the creativity of the series – instead of the usual powers (Earth, Water, Wind, Fire) each human host has not only these elements but also has control over their own respective season – however, none of these elements are seen utilized in this issue, which is disappointing.  And there is action in this issue, just nothing ‘mystical’ like you would expect.  Just the usual hack and slash and gun fighting.

In-story there are also more problems.  The set-up relies mostly on the hope that you bothered to read the opening, half the time never telling you the name of the main characters.  It is imperative to read the short bios, and while they’re neither novel length nor boring it is nice to incorporate anything that they say into the actual story.

The opening narration is also awkward with multiple instances when the narration from each panel is concluded with a … and continue in the next panel.  This is annoying to read and just an odd difference from the standard narration that has no useful purpose.  Thankfully, this narrating style only lasts during the opening flashback to 6 B.C.

During this flashback the dialogue and narration present a problem consistent throughout the entire issue: the odd names blend with regular text to the point where I don’t know if I’m reading a name or setting, like Tao, a place which I thought was a name, which confused me until I figured it out – which did not take long but should not take any time at all.  There is a part of the dialogue that said “Tut tut” and after thinking it was a name I realized it was just the expression which did not seem to fit with the dialogue from 6 B.C., which was mostly crafted to fit the timeline.

Going around the odd name choices in the dialogue, there is a humorous tone in this issue that works well.  The leader, Z-Girl, is very funny.  But there are never any corny one-liners coming from her.  She has genuinely funny lines as well as the rest of the cast in the few instances when they are given the chance to speak.

The importance of a first issue is to set-up the main characters, and most of the tigers are given only a line or two of dialogue save for Z-Girl who is given a lot of (understandable) attention and her love interest.  This lack of characterization is hurting the reader, who can not connect with characters never given any dialogue.

Two more characters are given a lot more dialogue but who are not even included in the title are the director and his officer.  But they mostly talk business, a conversation carried out in a boring way that could have been executed better.  They talk about various disasters occurring over the world, but it would be more effective to see these disasters while they’re talking about them.  Instead it just feels like a work update that you have to drudge through, just like another scene where a scientist is trying to explain a code to the team which I can not think of a way to rectify into being interesting. 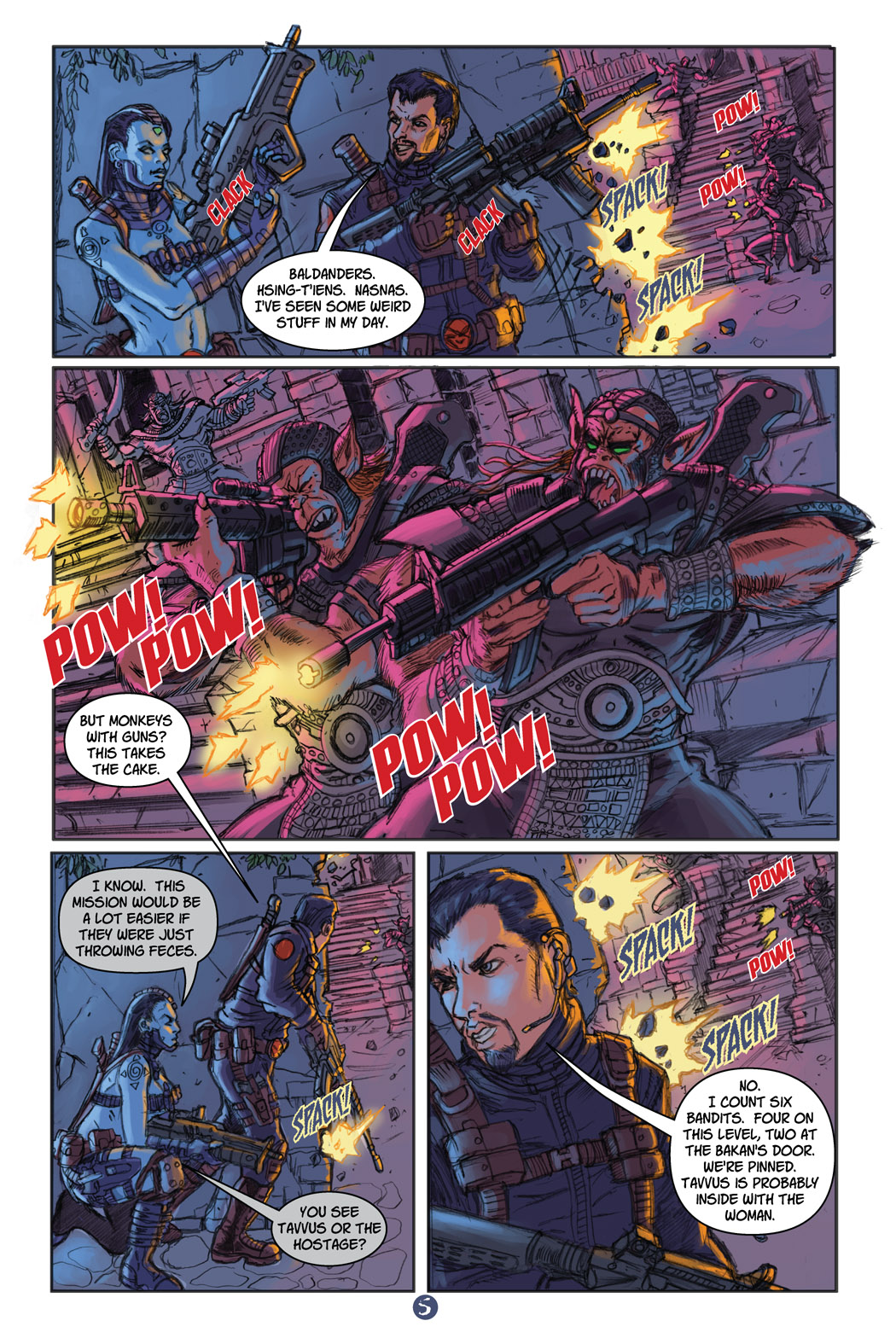 The opening is the most wonderful part of this issue visually.  Behind the panels is a cleverly designed background that looks like parchment paper, which contributes to the ‘old’ feel of the flashback.  The physical designs of the characters, drawn by Kirk Manley, are also very unique.  The best action scene is carried because of these designs, specifically when the team is attacked by Shiva the action scene is increased ten-fold by Shiva’s beautiful art design combined with a blue dragon.  The dark knight in the opening is drawn the best.

The only major problem occurring when looking at characters are their faces past the fantastic opening flashback.  Most of the expressions are very stiff and make some of the characters look they are constipated rather than fearful or upset.  All of the chimp soldiers have great designs but their expressions and odd names take away from their impact on the reader.  The most hysterical expression is when a chimpanzee is shot through the head and has the ‘O’ face.  It’s a great moment that adds to the humorous tone of this issue and hopefully was intentional.  If not, that is one of the greatest unintentional hiccups you can get.

What really made the artwork throughout the entire story feel so unique and great to look out were the colors done by Euan Mactavish.  They have a lightly shaded consistently that makes the comic stand out artistically from others.

The premise of Z-Girl: Odyssey is great but the execution could be handled better with more action and more well-handled explanations.  As a first issue, the main purpose should be to set-up most of the characters and it fails to do so.  But the artwork throughout is commendable, specifically because of Mactavish’s color work, and the humorous tone of the comic combined works well.  Z-Girl is an enjoyable main at the expense of little characterization given to other characters.  If you’re looking for a laugh and want to see a blue girl showing her skin, check it out.  You could do a lot worse than this.  And there are some nice extra features like some beautiful artist pin-ups and a “Comics For Japan” blurb supporting the Red Cross, a kind gesture from a decent comic that I can see growing into a great franchise – it’s just not ‘great’ yet.