By: | Comic Reviews | July 7, 2011
The character Zatanna is one of the better known lesser-known characters of the DCU. She is one of the Justice League's greatest magical allies, but she tends to keep to herself and her career as a stage magician when not needed. The series Zatanna is one that has been surprisingly consistent in quality from issue to issue. With a mix of stage lights and gore the art has varied from decent to impressive and veteran writer Paul Dini has been keeping the character fun, even when delving into darker stories. Having said that, this is easily the worst issue so far.

Dini steps out for this issue to make way for off-and-on back-up writer Adam Beechen. Beechen's previous stories for Zatanna have been cute with a little bit of a look into Zatanna's past. This issue saw none of his previous sentimentality and saw Zatanna looking almost prudish next to her all of a sudden famous cousin Zachary Zatara. While the issue begins with some genuinely witty and entertaining banter between the two, it ultimately devolves into Zachary looking like more of an ass than normal and Zatanna losing much of the fun that I find so vital to her character. 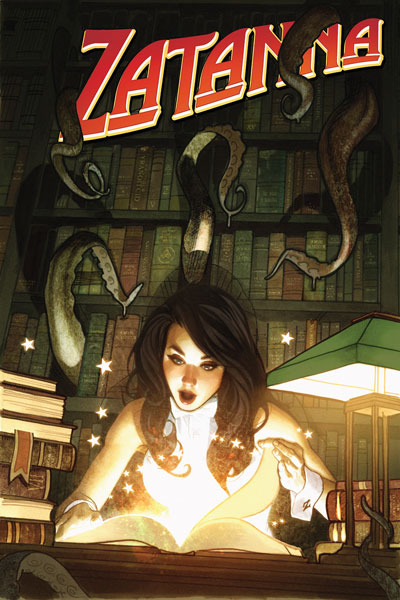 Previous issues have been really creative with Zatanna's backwards-spoken spells and she has kept things interesting with confidence, charm, and a genuine zest for her magic, both on stage and off. Here, she pretty much just goes through the motions. Zach is taken magic-hostage by a random succubus who stalked him at the club, I guess, and is Japanese for seemingly no reason at all. The resolution is uninspired at best, especially in a series that wraps up conflict with silly backwards magic phrases.
For the most part, the art is inoffensive, except for at least a couple panels in which the succubus looks like a Picasso and Zatanna looks like Quasimodo. I am not even sure how one pulls that off without intended effort. I genuinely appreciated the monster reveal, but it is definitely not as scary as Zatanna's hunchback face.

To add insult to injury, Zatanna #13 ended on a genuinely intriguing plot point. I am really curious to see what happens next with the main story. This issue, however, is the definition of bad filler.

If you want to check out Zatanna, I recommend it highly. Just do yourself a favor and don't start with this issue.