The artwork may reach an all-time low, the story may be all over the place, the characters may be butchered... but there is one slight surprise within this issue. Is it enough to make you want to buy Deathstroke #12?

This story-arc Deathstroke has been fighting through at face value is a very stilted and stereotypically simple story with Deathstroke going up against Lobo with the help of the Omegas, to save the world. The Omegas have a history with Lobo, who killed their parents. But there is a little more going on with this story that surprised me.

We've come an impossibly long way from Deathstroke #1. Rob Liefeld makes Slade seem like a very different character. Gone is the brash and self-obsessed Deathstroke who could kill anything written by Kyle Higgins. Now, Slade Wilson, a.k.a. the mercenary Deathstroke, is arrogant but actually cares about the world, his team, and is showing his age in combat while learning an important lesson. However, there was no build-up to this Deathstroke. Slade did not grow into this character, Liefeld made him into a different character so ongoing readers who liked Deathstroke's previous badass persona probably will not like this drastic change. This is clearly a completely different Deathstroke that Liefeld has created to suit the needs of the story. Mostly this is a pretty big misstep, with Deathstroke doing some stupid things like kissing a member of the Omegas out of nowhere - a moment written very much like a corny hollywood movie ending - and turning insanely heroic. This heroism will no gel with readers looking for the anti-hero, but this new personality it does develop into a very good aspect.

I've said before that at face value Liefeld's story is nothing new. But there is one thing at the end, introduced through Deathstroke's narration, that deserves recognition. Slade learns something important about himself from this mission, and it feels like he has more of a mental dilemma introduced in the beginning of this issue that is addressed by the end of the issue. We get more into the psychology of Deathstroke through his narration. In my previous review, I did point out how this narration during fights is unnecessary and takes away from the action, and that's still true but only when Liefeld is narrating the fight. In this issue, the opening narration from Deathstroke not only catches readers up and makes this issue an easy jumping on point. It also gets us into Deathstroke's head and shows us he actually takes more away from this battle than we would have though by the end. 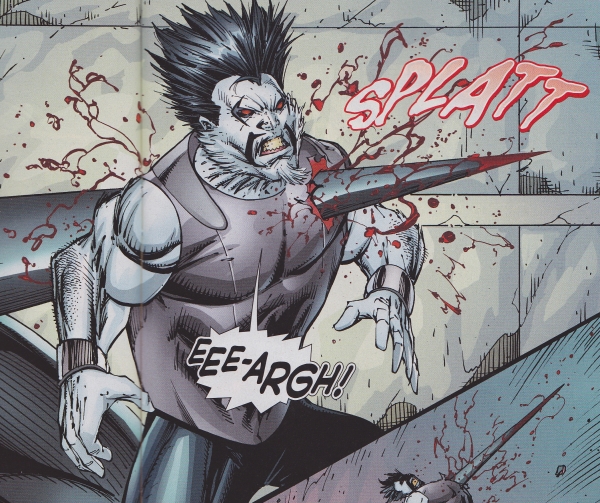 So what's the problem with this issue? Other than a couple clips of dialogue and a panel where Deathstroke drives through Lobo with his own motorcycle (an awesome moment ruined by awful art) - just about everything else.

The Omegas really take over this issue and the several before this. They need their own series, not only so Deathstroke won't be overshadowed in his own book, but also so the Omegas can develop as a team. Lobo's an even bigger problem though.

The story shouldn't have been with Lobo. A no-name baddie would have served his purpose just as well, and without alienating Lobo fans by making Lobo into a generic genocidal villain who says things like "It matters not." A no-name would have worked, but it's just that – a no-name. A no-name would not have gotten the issue as much attention as Lobo got the series. Lobo was good for publicity, but not for the story. However, Liefeld's creation of a similarly designed Sheba could prove to be the creation of another fan favorite, but ironically despite being Liefeld's creation, if Liefeld were to mishandle Sheba like he did Lobo, I would say I want her written by someone else.

The artwork in this issue is the worst it's ever been in the Deathstroke series. Lobo is still super scruffy and is over-lined and over-shadowed like everyone else. You could confuse the Omegas with Liefeld's Youngbloods line-up because of their similar designs, and this isn't the only time Liefeld's art feels lazily recycled. You can tell just by looking at the cover to see what I'm talking about. Lobo and Deathstroke's eyes are identical. The proportions of the characters are terrible, especially one panel with Zealot who's torso is a triangle. The vehicles, which thankfully don't take up too many panels in this issue, look like a mesh of basic shapes that don't go together and make the vehicles look awkward. There are rarely any backgrounds, which are instead replaced by dull colors with speed lines or, in some instances, no color at all! This is not just the worst artwork ever in Deathstroke, but also the worst artwork in any New 52 title I have ever seen.

Unfortunately, while this new direction for Deathstroke is an extremely bold (and undoubtedly going to be badly received) decision on Lefeld's part that could morph into something more, there are too many other problems with this issue that make it nowhere near worth buying. The storyline has many problems, the artwork reached an all-time low in the Deathstroke series, the Omegas feel like they're taking over the series and Lobo should have been replaced with a no-name. Huge fans of the New 52's Deathstroke pre-Liefeld and Lobo fans will hate this issue.

Liefeld's run may have well been a different version of Deathstroke altogether, but just like Kyle Higgins, Rob Liefeld's run on Deathstroke has come to an untimely (for some) end. Yes, Rob Liefeld is leaving DC. So who will be taking on the mantel of Deathstroke next? Will thy make him the unstoppable force he was in Higgins's run, or the aging veteran Liefeld portrayed? Either direction has merit, and we'll find out in two months since we first have to sit through a gimmicky zero issue by Liefeld.