For passionate horror fans, it doesn’t take long to become evident that most mainstream genre fare is pretty junky, if not outright insulting. To stave off insanity at the thought of franchises dragged past the double digit milestone, effort must be exercised to hunt down more obscure offerings.

Now keep in mind this is a list of films I found to be very solid and usually find to instil the reaction of a shrug when mentioned to another patron. This isn’t a list of simply arcane horror films, as I’ve seen plenty of other scary movies that lie on the periphery, but even indie efforts are not safe from cliché and shoddiness. So in the hope that there are at least a few entries on my list that do this article’s title justice, here are 10 strong horror movies (in no particular order) that are of the neglected variety.

Long before Kickstarter made headlines in a big way with its successful backing of the forthcoming Veronica Mars film, the funding website gave birth to who knows how many small film productions. 2011’s Absentia was one such beast, scoring a shoestring budget of $70,000 from its backers and landing on the horror festival circuit with a splash, earning dozens of awards. While it’s low budget is apparent, Absentia is a contained, creepy, efficient and well acted psychological thriller which finds a woman facing the final decision to declare her husband dead in absentia after disappearing seven years earlier.

But as she prepares to sign the proper documents, strange things begin to happen: she sees ghostly visions of her husband and some creepy tunnels down the road from her inexplicably begin to draw this fragile woman closer and closer. There is little excess to be found in Absentia – it’s stripped down, the performers, though new to the game, are strong and there is just enough intrigue, frightening imagery and mind-messing drama to keep things compelling. 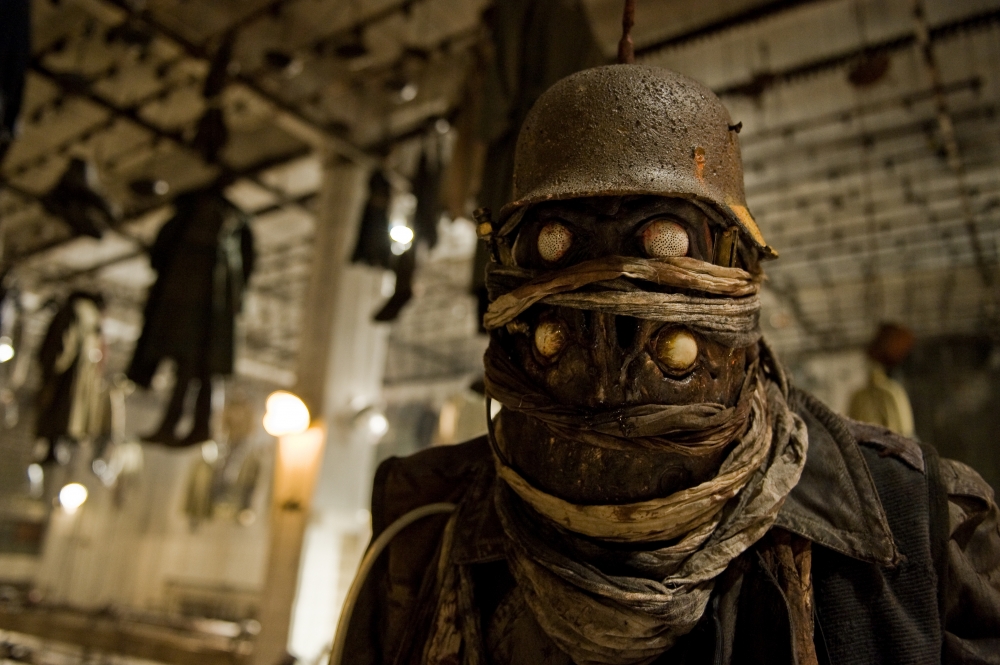 A film that may sound more familiar thanks to a release date from earlier this year, Frankenstein’s Army is a masterstroke of production design and costume work, one that rivals those from any big budget affair. Guillermo Del Toro would love this film. Taking place in the closing act of WWII, a squad of Russian soldiers push into on their way to the capital. However things are not as they seem and they stumble upon an experimental facility commissioned by the Nazi’s and inspired by the morbid works of Dr. Frankenstein.

The slower setup, bland dialogue and found footage style of shooting may leave something to be desired from a creativity standpoint but the climax is the stuff of genius, employing some of the most creative and incredibly realized monsters ever put to screen, each one as diverse (and perverse) as the one by which it was preceded. These creatures are a blend of fresh, metal and weaponry, brought together in some deranged, steampunk flavoured fever dream. I’m unsure of exactly how it was pulled off, I’m just glad it was. 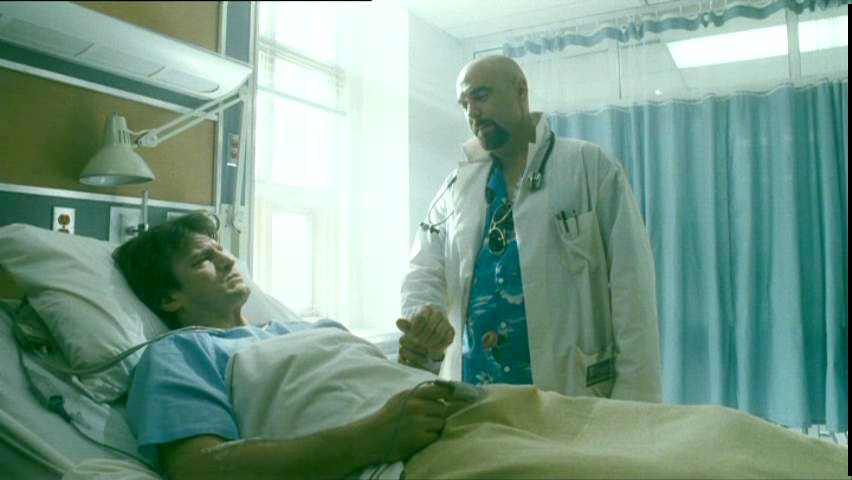 The 2005 Michael Keaton starrer White Noise was mostly the case of a clever idea executed competently for about 40 minutes before completely losing its grasp on the material. While it’s sequel is far from perfect, it’s bolstered by an equally intriguing story of a man (Nathan Fillion) who comes back from the brink of death after an attempted suicide only to find he can see which people are about to die. But in trying to be their saviour he sets off a series of events that causes more harm than good.

Joined by Katee Sackhoff as a woman who may or may not be marked for death, White Noise 2 asks interesting questions, executes them better than most and features strong work from its leads. Though like so many fright flicks it wobbles a bit towards the end, this direct to DVD sequel is the rare follow-up that’s better than the original. 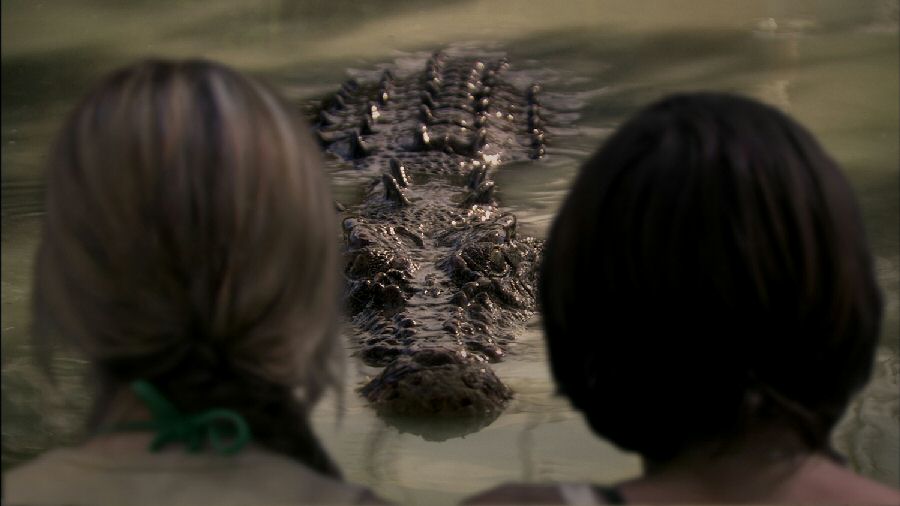 Three people, a tree, a boat and a crocodile – people, setting, situation is all that Black Water is inclined to work with and in the end it’s all it needs. This 2007 Australian survival flick is as simply constructed as a film can get, using the Jaws approach in that what you don’t see is infinitely more terrifying that what is constructed in vivid detail. After their boat capsizes in Northern Australia thanks in no small part to a sudden crocodile attack (leaving their guide dead) Gracie, her husband Adam and her younger sister Lee scramble up a mangrove tree leaving them with nothing but a birds eye view of the murky water and their overturned boat taunting them not 12 feet away.

With ripples everywhere and the deadly predator usually nowhere to be seen, sequences which see our protagonists engage in acts as simple as slowly lowering their leg into the swamp are as white knuckle as they come. It’s the classic case of a fantasy turned nightmare with the beautiful nature of the land down under turned into foreboding prison. If survival horror is a favourite of yours (more importantly stripped down, lovingly constructed survival horror) then Black Water is worth your time. 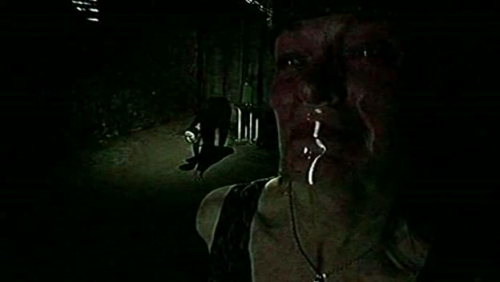 Never scoring a theatrical release, The Poughkeepsie Tapes is a faux documentary about a serial killer that remains at large, as recounted from witness testimony, experts and the collection of video tapes that were recovered, which showcase the killer perpetrating his heinous acts. Directed by John Erick Dowdle who would go on to direct Quarantine and Devil, this grizzly horror endeavour is exhausting, troubling and smartly constructed to realistically mimic a great number of real life crime docs. The acting across the board from the killer behind the camera, his soon to be victims and all those “interviewed” is actually quite stellar, especially considering the varying styles of performance that need to be delivered. 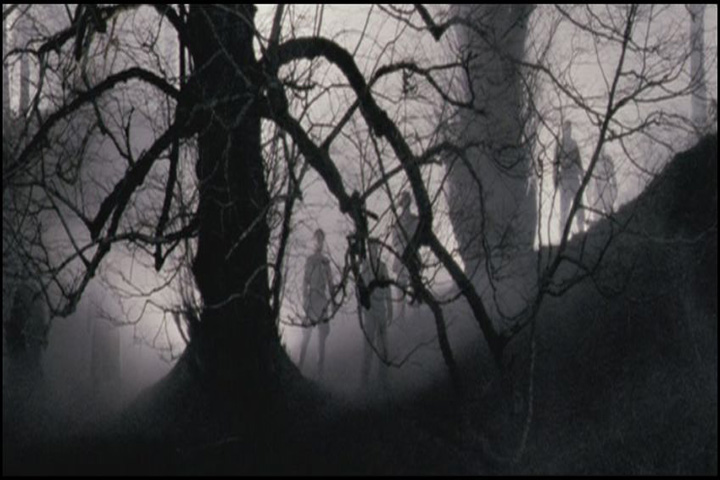 Ghost Nazis, mercenaries and Ray Stevenson kicking ass – what more could one ask for in a horror film? That’s what I thought. Outpost is an uncommonly smart indie fright flick with ideas that trump any of the inconsistencies stemming from the low budget nature of the production. Unwinding in an abandoned WWII bunker in Eastern Europe (man, nothing good ever happens in Eastern Europe), Outpost finds ruthless soldiers of fortune investigating, at the bequest of their benefactor, the installation, but who soon realize there are sinister and otherworldly activities going on.

In addition to the interesting nature of the threat, Outpost smartly utilizes its contained, gloomy location to ratchet up the suspense and pull off some effective jump scares and fake-outs. Like nearly ever film of its ilk, things do slip a tad when the threat is fully revealed, but there is enough badassery, bloodshed and scares on display to make Outpost a very fun diversion that should please fans of the genre looking for a bit of a different flavour to their scary movie. 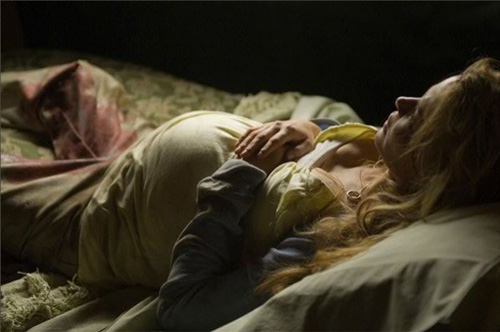 Those pregnant ladies with any form of Tokophobia (that’s fear of giving birth) would be best to stay away from Grace, an unsettling and creepy little gem that will make even those not expecting cringe. It’s skin crawling nature stems from multiple facets of writer-director Paul Solet’s story – from both the more overt, disturbing events that unwind and in the slowly deteriorating mental state of our protagonist whose love for her child drives her to dark places. These themes may not be, per se, profound but in the context of the film they add a far more complex layer to what could otherwise just be another “demon baby” tale.

Aside from Solet, much of the film’s success comes from the performance of lead Jordon Ladd, who must anchor nearly every scene of Grace and portray a woman who is going through a poignant and troubling transformation. She is not a likeable individual in the strictest sense but viewing everything from the outside in, we are witnessing a descent into madness and a somewhat deranged level of love. Grace works both as a traditional horror film and as a psychological thriller in the vein of Rosemary’s Baby – a comparison I’m happy to give. 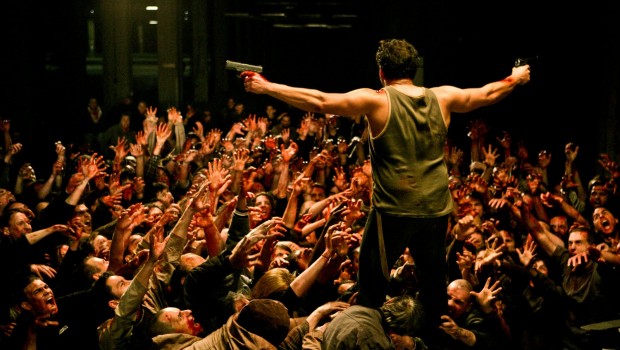 What would this list be without a zombie film on it, I mean, it is me writing this after all: lover of all things walking dead. So that brings us to The Horde, a French import that brings together gangsters, police and the undead in an intermittently claustrophobic, always gory and thoroughly slick mash-up. If The Raid were to add in zombies, you would have an at least somewhat approximation of The Horde. Toss in some of the best zombie kills ever put to screen and some great last stand moments and what you’ve left with is a pretty damn fun time.

In addition to the slickness on display, what also makes The Horde stand out is its aforementioned French roots which inherently puts a very distinct spin on what we’ve come to expect in a gritty, ghetto gangster flick. Obviously this is far from a deep examination of gangland life in , its approach blended with the undead menace makes for a more memorable experience than most. 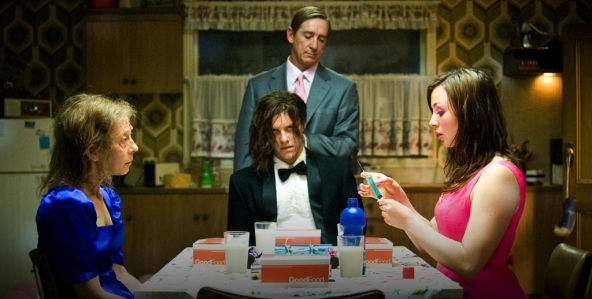 Awkwardness descends into weirdness, which then transforms into harrowing and then into messed up in Australian horror film The Loved Ones, which takes the oft seen staple of the prom setting and then, well, doesn’t use it at all. There is a mound of uncomfortable and gruesome stuff going on throughout this torture based flick but it’s also very funny and in the end deeply satisfying despite the ugly journey. The setup may be inherently simple, finding a father and his outcast daughter (who share an uncomfortably close bond) take their own brand of revenge on the popular kids they feel have wronged them, but the journey is anything but.

It’s difficult to fully talk up this strange little gem without giving away the plethora of twists and shocking turns The Loved Ones takes, but it’s that clear writer-director Sean Byrne, who makes his future film debut, has some very clever things to say about a number of subgenres and sports a wickedly twisted mind to boot. This is something that might arise if Takashi Miike tackled an Americanized prom/high school setting – it embraces a very similar bland of intentional grossness with unwavering gore and a sharp satirical edge. This is a must see for horror fans.

Director Joe Dante may not be a household name anymore, but he’s the genius behind such classic genre fare as Gremlins, The Howling, Piranha and Innerspace, and recently he switched gears to bring us a YA friendly fable with The Hole, something the current “Goosebumps generation” will eat up. The Hole works on three levels: it will (I’m sure) frighten (in a good, non scarring way) younger kids, continue to evolve after it’s viewed again at an older age, and more importantly keeps any accompanying adults engaged. Watching it as a twenty-something, it became immediately clear it’s a movie I would have loved (and remembered) as a young teen. It’s perfect sleepover fuel for both genders.

The actual, physical hole refers to a trapdoor two brothers find in the basement of their new home, a source of intrigue which with the help of a next-door neighbour (a youthful individual that one such sibling may find fetching) they venture to find out the meaning behind. Why is this padlocked, eerie well there? And why strange and creepy things begin to transpire after they open it? The Hole simultaneously tackles more primal fears kids have beginning with ghosts and ghoulies, but then goes a step further and tackles abuse and loss. It’s a tender, scary and often poignant offering that supplants cliché with genuine smarts and equally intelligent frights.