Over 9000 Zombies! Early Access Thoughts: A Silly Yet Enchanting Horde

By: Josh | PC Features | July 15, 2014
Over 9000 Zombies! pretty much tells you exactly what it's going to be right in the name. If we were to extract our thoughts from the title one would imagine in the simplest terms a survival mode featuring none other than walking corpses. Well as it stands right now, that is exactly what Over 9000 Zombies is but does just enough different to make it stand out and be a great time waster.
When it comes to actual game modes the pickings are pretty slim, you can either take on the endless fodder alone or with a buddy in one mode that tasks you with surviving through the harrowing legions of decomposed bodies. Rather than giving you a direct number of enemies to slaughter, the game focuses on a loosely termed day and night cycle to determine each wave. Since the waves are based around time rather than sheer number of enemies to decapitate, that leaves the game free to throw as many zombies and mutants at you from the moment you start. It takes away the grindy nature of other games like Gears of War which start you off slow each time you begin at level one. Instead, each day adds different enemy types along with upgrades for previous enemies like bonus damage or extra health, making the fight just that much harder as you zig and zag your way through the retro styled world. 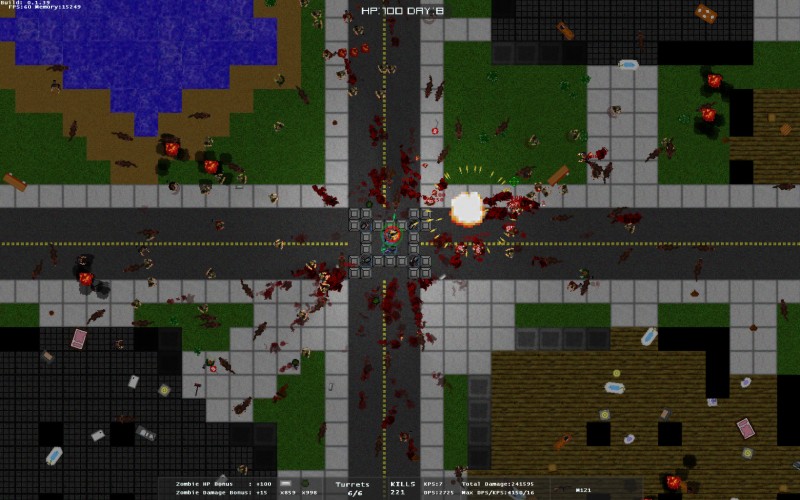 The aesthetic fits the game nicely, displaying a direct top down view on the players with relatively large pixel art. Even with the style choice, the amount of zombies coming at you from all angles is impressive; it feeds into my childhood guilty pleasure of enjoying games that simply throw a lot of enemies at you all at once from every feasible angle. The only downside was how the enemies came to be on screen, most of them seemingly warp into random spots on the map causing you damage for simply being in the wrong place at the wrong time. This probably has to do with the one and only map being  huge but still, something I would like to see change in future updates of the game.
Of course you have a large arsenal of guns at your disposal and on top of the ability to create defenses how you wish. While you are dismembering the never-ending hordes  you will also collect pieces of scrap metal, scrap metal is all you need to create a fortress fight for true survivors of the zombie apocalypse. Buildings vary from things like turrets and walls that are all traversable by the player(s) but not the zombies. A lot of these pieces cost a pretty penny but luckily if you do happen to bite the dust while playing you only lose half the scraps in your inventory. The few times I bravely defended my eight by eight box with one turret was both a rush of excitement and simply a good ole time. 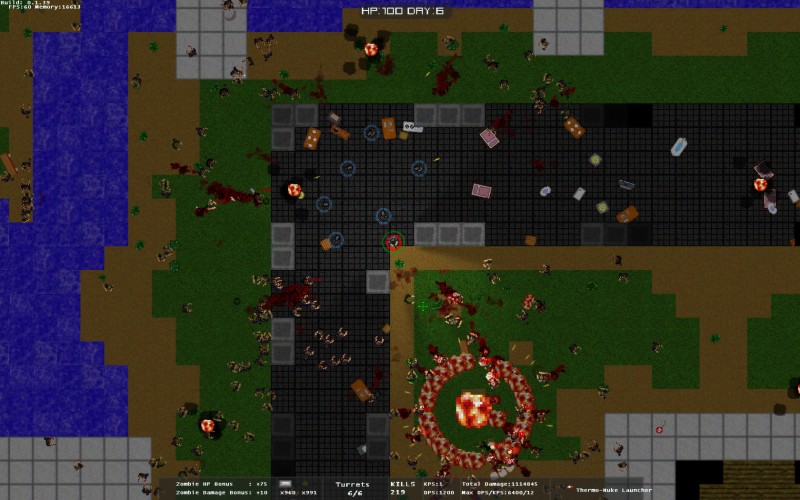 The real downside however is Over 9000 Zombies for the time being is a one trick pony. Once you finish your first run of the game there isn't much more to it to really reel you in for another round. Being able to play co-op helps with this a bit but to simply put it, the game is somewhat thin at the moment. It doesn't help though that the map is completely static and the same each time. While the drops are completely random, the areas you traverse are the same, I would really like to see extra maps thrown in at some point or at least a bit of level randomization.
However, two factors do work in the games favor. The price point is at a sweet spot and the early access that is actually playable. So many games that enter early access nowadays are barely functioning, leaving you with a bad taste in your mouth after spending $20 or $30 for them. Over 9000 Zombies! works, every mode is intact, every gameplay essential detail is in working condition and that is more than you could say for a lot of games in the early access level. 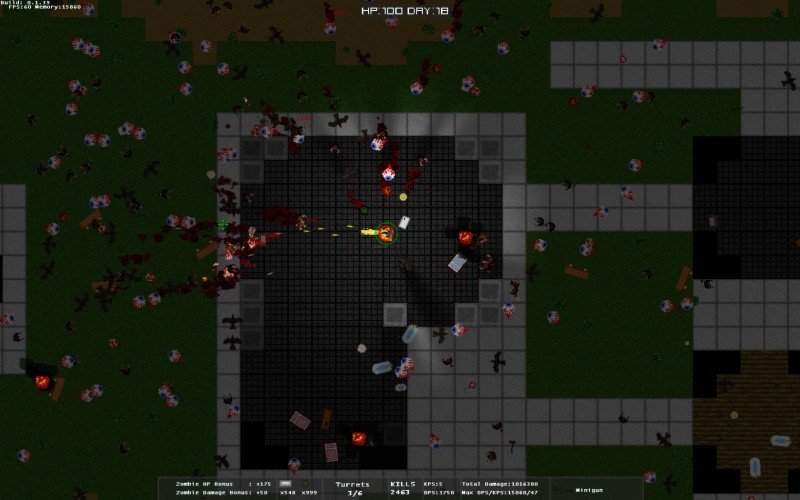 I do hope the game begins to expand on itself. Adding even just a variety of different game modes or modifiers to give it some more meat. What is currently there is just some good old fashion fun of a joystick shooter with construction aspects. There is potential to promote this game from a time waster to an indie hit, it just needs a little something more to launch it off.
You can grab Over 9000 Zombies! right now on steam early access for $7.99.