"Animal Crossing + Mario Party = Profit?"
By: Jeffrey Dy | Wii-U Reviews | November 16, 2015
Who of thought Nintendo's amiibo phenomenon a year later was gonna be their top selling products within that time span. The Super Smash Bros. figures alone drove fans and consumers crazy lining up at stores hours in advance and also constantly checking the Internet for availability because of how rare they were early on. While availability has gotten better the past several months, what is the next series to get the amiibo treatment? For Nintendo, that's a no brainer and it's none other than the Animal Crossing franchise. They already started with cards for the 3DS release Happy Home Designer, but a whole new line of figures is out alongside a new Wii U game called Animal Crossing: amiibo Festival. At first glance, amiibo Festival looks like the franchise's take on the Mario Party formula. Does that translate to success that Mario Party 10 wasn't able to capture earlier this year? 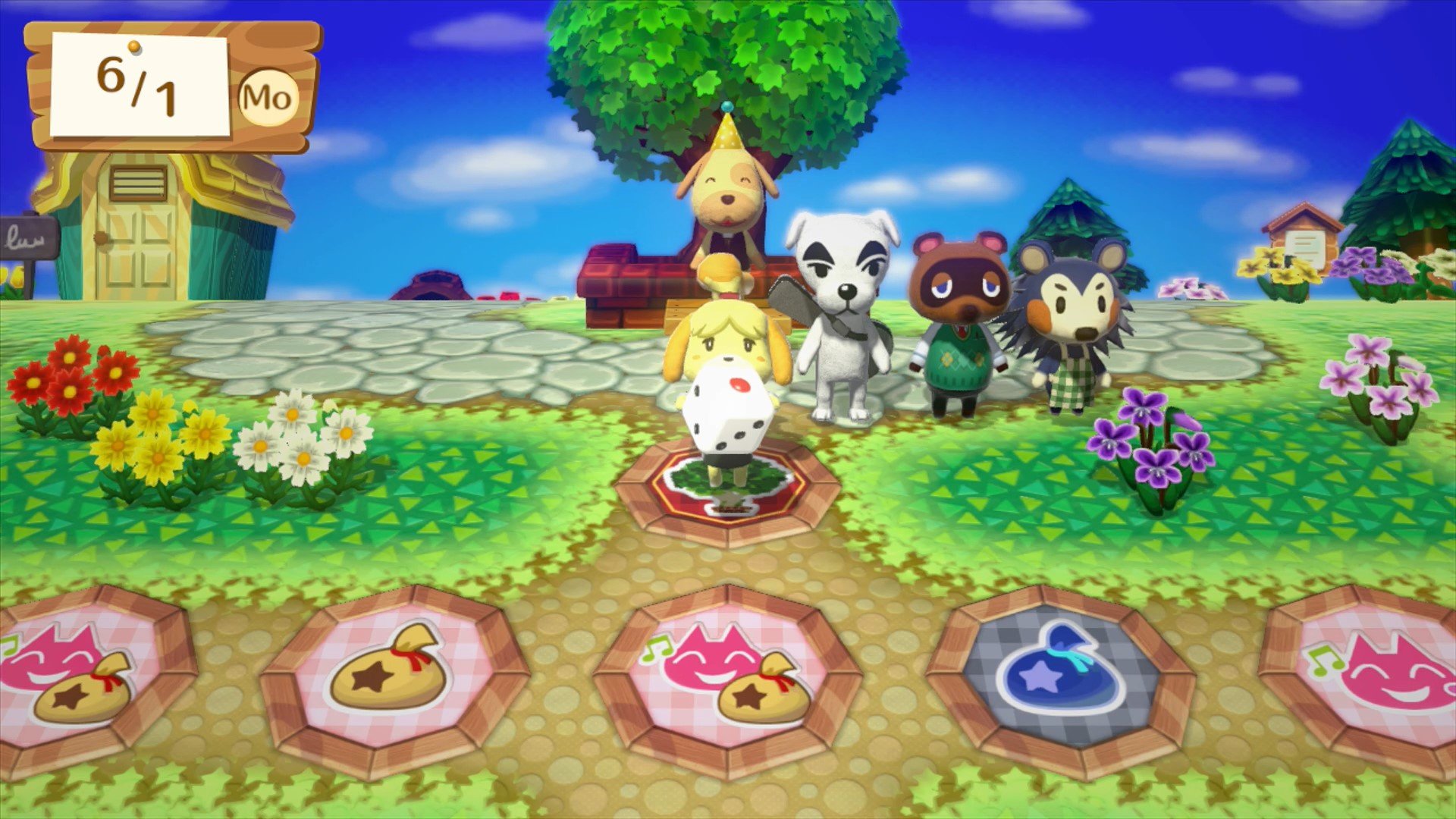 Animal Crossing: amiibo Festival's main mode is the Mario Party-like board game that lasts about a hour and 15 minutes. While the board looks like something straight of Mario Party, it doesn't play exactly like it. Using an amiibo figure (Isabelle and Digby comes with the game), you still roll dice to advance to certain spaces, but it's more like a mix of Candy Land and Monopoly's Chance/Community Chest cards. Whoever has the most happy points at the end of a month wins the game. These happy points are gained or lost whenever you roll the dice every turn and landing on various spaces also accumulating or losing bells. The spaces consist of what you did for the day which is where the Monopoly element I just mentioned comes in. The writing in these are clever at times being standard for the Animal Crossing series. Having a lot of bells at the end of the month also converts to happy points, so those will come in handy especially managing them strategically well, which I'll get into in a bit.
Despite lacking the Mario Party mini-games within the board game, amiibo Festival's strategy kicks in at the second week of a month by turnip management, using in-game cards and taking advantage of the special spaces that randomly happen at certain days. Turnips can be bought every Sunday of a month, but it's all about landing at the right space to sell turnips at a high value that converts to bells. Turnip values randomly fluctuate or crash during the game, so timing your cash in with them are key to success. Special spaces range from Katrina the fortune teller giving you tarot cards for receiving bonuses whenever someone rolls that space that card has, Redd's card shop to buy certain cards and Dr. Shrunk's cheesy comedy that also gives you cards. While dice cards are the norm where you a roll a specific space at the cost of some bells, some cards such as the up & down card can dramatically change the game where this one specifically can change turnip values at a whim. In a nutshell, the board game does come down to more luck than skill especially where there's spaces that can you get bells in five digits. 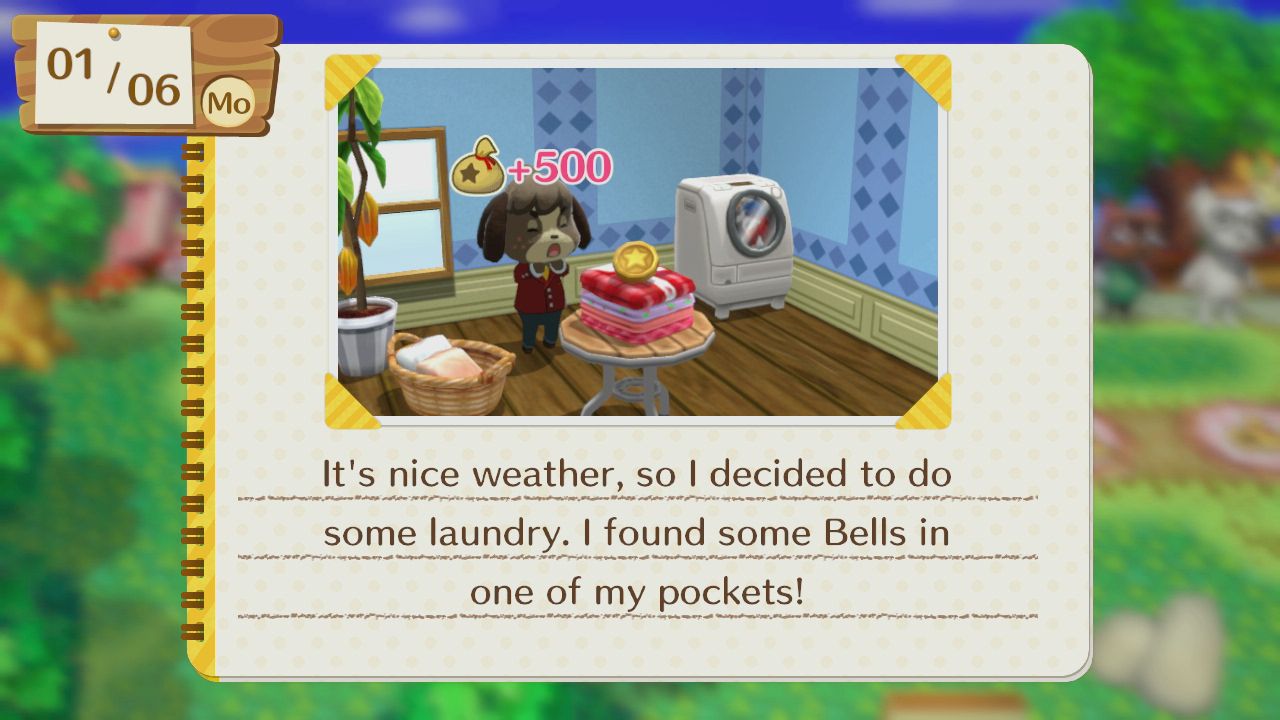 The board game's variety also comes within the months you play the board game as expected. After completing the first playthrough when you first boot up the game, you get to select any month to play a next one. Holidays play a factor to the board and there's contests for whoever caught the biggest fish of bug as well by landing on certain spaces. I do wish the day's events don't repeat as much whenever you land on the normal spaces. The main problem however, is you have to grind out some matches just to unlock the rest of the game's content with happy tickets. That becomes repetitive to the point it was reminiscent of Super Mario Maker's unlocking system with the maker tools if you're using the "faster method." I don't know why Nintendo has been enforcing this philosophy recently locking out significant content that was advertised in the back of the box out of the gate, but it's becoming more of a recurring issue. I guess they have to make you play the board game multiple times first somehow despite how repetitive and a snoozefest these games can be.
For a game called Animal Crossing: amiibo Festival, it's all about the amiibo right? Well in fact it is! Using an amiibo figure multiple times for the board games unlocks more outfits and emotions. However, you have to use the amiibo to roll the dice every day in a month. Now think about that when it comes playing with three other human players and other amiibos. You have to pass the gamepad to another player to take their turn using their amiibo. Since the gameplad is the only controller option, this becomes quite a hassle. Amiibo cards that were first introduced in Happy Home Designer can be also used in amiibo Festival in a variety of ways. During the board game, they're used to roll specific numbers at a high chance rate and also added as extra residents for the events. They're more used for the game's other unlockable content, the mini-games. 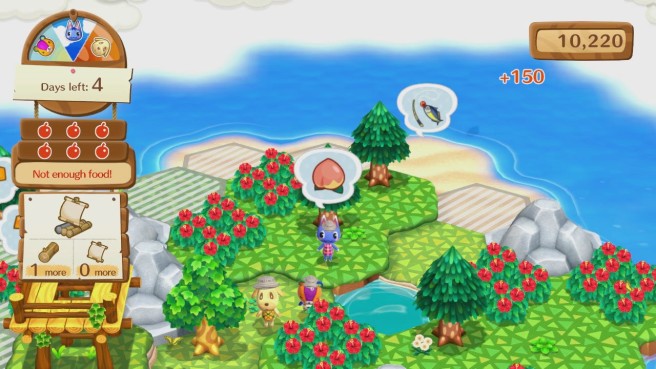 Most of the mini-games in amiibo Festival are more misses than hits. Besides the Isabelle and Digby figures, the game gives you three cards to use as well: Rosie, Goldie and Stitches. My main problem with only three cards is because some of the mini-games require at least six forcing me to buy an extra amiibo card pack. Another issue is some of them require quick uses of card activations and even for multiple players, it becomes a pain along with trying to pay attention to both the TV and gamepad screen at the same time on which one to use. Resetti Bop and Acorn Chase end up as stinkers because of those reasons alone. Desert Campers is a boring "guess who" mini-game where you have to guess which amiibo cards are hiding in the tents. Quiz Show is decent for testing your Animal Crossing knowledge, but even fans might struggle with answering some of the questions despite being able to use amiibo figures as lifelines to help you out if they have a specific expertise.
The more competitive mini-games are Balloon Island, Fruit Path and amiibo Card Battle. Balloon Island lets you multiple cards to accumulate points by popping balloons and landing on the island for a multiplier. No points are given if you land on the water. Fruit Path has players take turns rolling what the card provides have to pick up apples. Having too much would likely make you fall down and lose some, so there's some strategy to it. Amiibo Card Battle is a contest where whoever has the highest dice value wins, but there's more to that when the twists kicks in depending on a card's other abilities.
The best mini-game and arguably the best part of the whole package is Desert Island Escape. Using three amiibo cards, you have to collect some logs and a sail to escape an island within a day limit. It is surprisingly deep with multiple levels of various difficulties and assembling your crew. For example, the three cards that comes in with the game is a great team to use as Rosie can collect fish without needing a rod, Stitches can find honey more easily and Goldie sniffs out nearby items. While the main goal sounds simple, you still need food to survive and you'll find those along the way, but there's also pits and enemies in the way to prevent from going further than the alloted spaces a card has. With the extra amiibo card park I bought, I had a different crew to use so mixing things up with their special abilites makes it fun. I wished this mini-game was out on out of it's own on either 3DS or Wii U because how good it is.

Animal Crossing: amiibo Festival comes down to how much you're willing to use Animal Crossing amiibo figures and cards. There's some neat uses for them, but collecting all the figures (a second wave is already confirmed for a January release) and most of the cards is pretty steep on the wallet if you want to enjoy everything the game has to offer. The base $60 package should of had at least six cards instead of three because of the requirement for certain mini-games. The mini-games having to be unlocked by the playing the board game multiple times became more of a chore than fun and even most of those aren't that fun to play either. The board game itself is a chill and relaxing time with more players, but if you're looking for the Mario Party-like experience, this ain't it with the mechanics here requiring much more luck than skill. There's still some strategy in it, but don't expect to screw over your opponents like you would in the Mario Party games and the Wii sleeper hit Fortune Street. Desert Island Escape is the only other good part of the package besides the board game with how deep it is. Animal Crossing fans and kids will get kick out of what amiibo Festival offers for short bursts, but even amiibo fans waiting for the next big game that uses them well besides Super Smash Bros. have to wait again.
Rating
6.0
Pros