It’s good to be back with another installment of Anime Monday. After last week’s bummer, we needed to come back strong. This week we'll take a look at Royal Space Force: Wings of Honnêamise. And, yes, this one delivers.

Shirotsugh Lhadatt dreamt of being a a fighter pilot as a kid. Unfortunately, he realized early enough that he didn’t quite have the smarts to make it. Like anyone who has ever seen their dreams evaporate into thin air, Shirotsugh turns to the next best thing ands joins the Royal Space Force. His dreams get notched down another peg when it becomes clear that the Royal Space Force is a bit of a joke. In this alternate world, humanity is already pretty modern, yet no one has figured out manned space flight. The Royal Space Force has already had several members of its corps die in failed rocket launches. Shirotsugh and his fellow comrades’ moral is pretty low. They train halfheartedly. While watching safety videos of the past rocket launching explosions, they giggle and add mock explosion sounds to the footage. When Shirotsugh meets his friends out for drinks in his work uniform, passing strangers don’t even recognize the uniforms. When someone tells them its a Royal Space Force uniform, they just laugh. Shirotsugh has slipped into complacency until he meets Riqquini, a woman handing out religious pamphlets on the street. She’s completely awed by Shirotsugh as an astronaut. She inspires him and rekindles his passion as an astronaut. He returns to work with a  new sense of purpose that catches everyone by surprise. He volunteers to be the next guinea pig to be blasted off into space. His friends’ jaws drop to the floor and his superiors repeatedly question the room for any other volunteer. Shirotsugh sticks to his convictions though. The film sends him down a sophisticated, nuanced path of personal and professional growth. 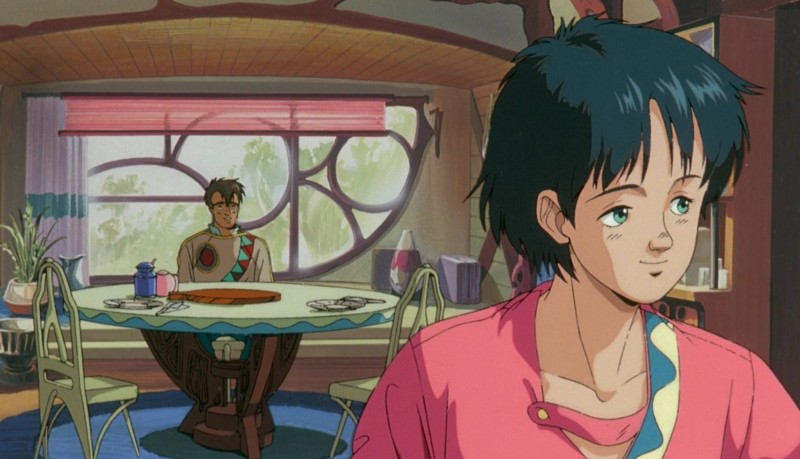 Royal Space Force was released 27 years ago in 1987, but boy does this film look good. And the story stands up pretty well too. The film uses the archetypical underdog story to lay the groundwork, but it quickly evolves into a more complicated story with a surprising amount of maturity. Lest it get too heavy handed on the moralizing, Royal Space Force know how to lighten the mood with some wonderful visual gags sprinkled throughout. Captivating, quirky characters also make this film feel very well rounded. Anime films can get along just fine if the visuals are amazing and coupled with an equally strong narrative, it hits that sweet spot that separates the good from the mediocre. 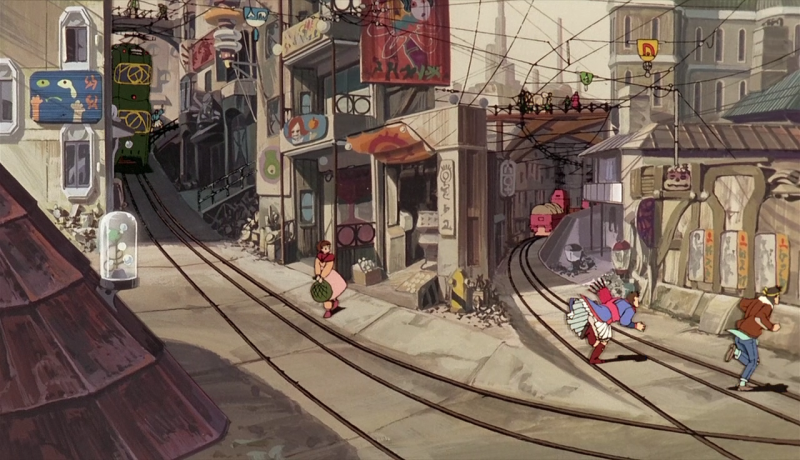 In what I promise will be the last mention of computer animated sequences for a long, long time, I’m over the moon happy to announce that Royal Space Force contains NONE whatsoever. Call it elitism or simply a little too much fondness for traditional animation, but I see it as a win-win. Royal Space Force also has a wonderful tracking shot during a chase scene. Give these guys a pat on the back because I can assure you that was not an easy feat. This does serve as a great comparison to today’s use of computer animation to create these exact same camera movements. While I won’t deny that computer animation for a complicated camera movement is always going to beat out traditional animation’s abilities, it’s the aesthetic incongruence of computer animation within an animated film that really gets to me. But who knows, if the studio behind the film might have had the technology available to them, it’s quite likely they would have opted for computer animated sequences.

All that redundancy aside, Royal Space Force is a really good anime film. For those who’ve seen the film, what better time to revisit a great film. If you haven’t seen it, you can add this to your list and save it for a rainy day.