Welcome back one and all! Anime Monday has returned after a tiny break, but we're back just in time for the holidays. ‘Tis the season for a Christmas-themed Anime Monday! The pick of the week is none other than Satoshi Kon’s and Shogo Furuya’s Tokyo Godfathers. 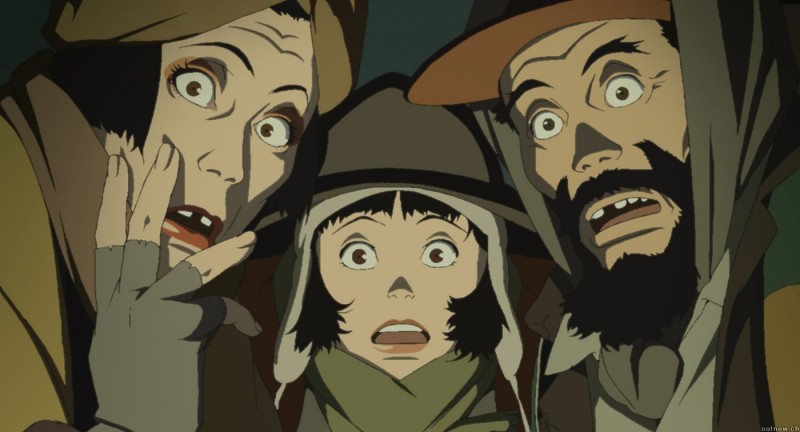 Tokyo Godfathers is the story of a misfit, homeless trio. Hana is a transsexual woman. She assigns herself the role of the matriarch in her ragtag group that includes Gin and Miyuki. Gin is an ex-racer who saw one loss derail his career and slowly unravel the rest of his life. Miyuki is a young, runaway who's been taken under the protective wing of Hana. She's always quick to point out that she's not homeless, and can return home whenever she wants- except she doesn't.  The three of them have a very interesting dynamic. Hana has a lot of love in her heart, but no one in particular as a willing recipient. Miyuki, is young, brash, and a little naive- she’s not as weathered to homeless life. Gin is bitter and remorseful, unable to face the truth about his past. It’s Christmas Eve, and they’re dumpster diving when they discover an abandoned baby. Hana seizes this opportunity to make her dreams of motherhood a reality. Gin urges her to take the baby to the police, but Hana insists the baby is their Christmas miracle. 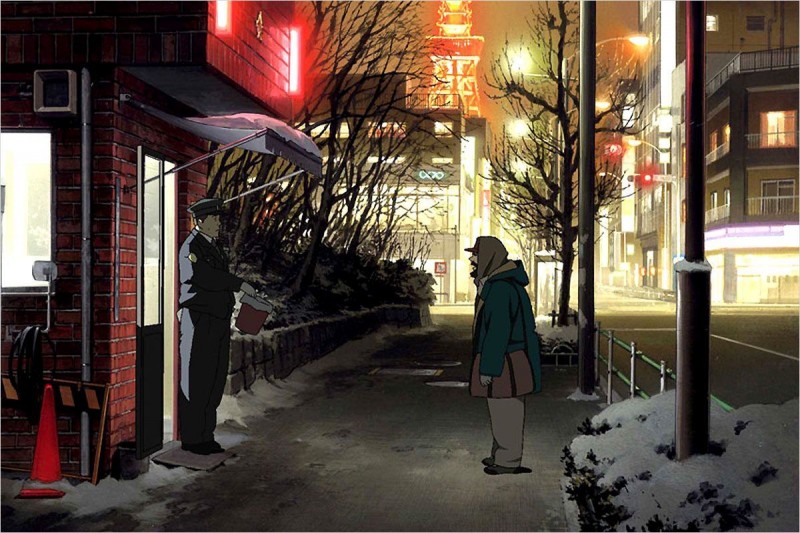 Eventually, Gin is able to convince Hana, that keeping the baby is not the best idea for a group of homeless people. Hana agrees, but only on the condition that they find the parents and confront them. Hana was put up for adoption as a baby, and lingering hurt feelings fuel her desires to find the baby’s parents and demand they give a good home to the child. This sets the trio off on an adventure through the city of Tokyo.

The focus on this aspect of fringe society is an interesting and bold choice, not something you would associate with a Christmas-themed anime film. The back stories of how each character came to be homeless trickle out. Hana, Gin, and Miyuki are equally interesting characters, which creates a solid foundation for the film. Hana is wonderfully loud and emotive, creating the emotional backbone of the group. Her story is just plain tragic, as a transsexual she’s grown accustomed to society’s closed doors and scorn. She never gives up, and she keeps the morale up. Gin’s story is filled with self-hate, but only because he longs for redemption. The slow reveal about his past and wonderfully mirrors another arc in the film. Meanwhile, Miyuki’s backstory is a little ridiculous, a little funny, but captures perfectly the way a young person would let a small problem escalate into a huge mess. She desperately wants to go back home, but she doesn’t know how. 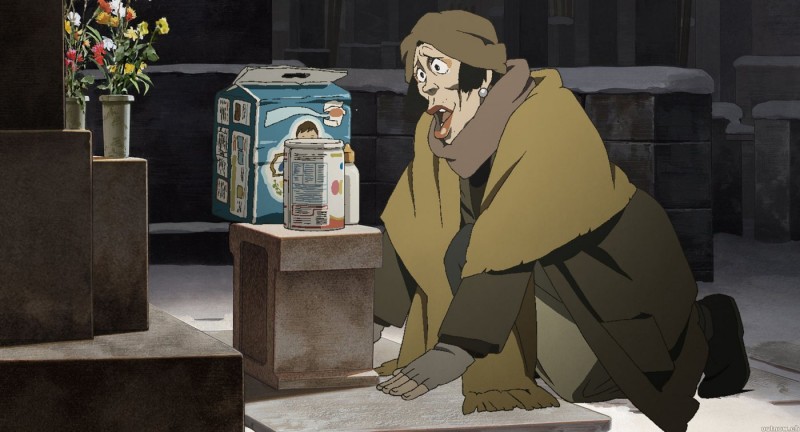 Tokyo Godfathers is a lovely film, and with more than just one Christmas miracle to warm your heart. The animation is great. I especially loved the touches that were given to animate each character’s face. Something about the expressions is just quirky enough to give each character authenticity and individuality. The dramatic elements are balanced perfectly with comedic overtones. Of course, even with a baby in tow, mayhem ensues with guns and cars. The film is an all around crowd pleaser. Any grinch would be hard pressed to make it without this film without their heart growing a few inches. If you’re looking for a great holiday film, but are tired of the same old classics, look no further. Tokyo Godfathers has enough Christmas cheer to spare.