Are Superheroes the New Zombies?

Today, comic books are becoming ever more popular, ever more mainstream. But I remember the days... the Dark Times when it was not so. When being able to name all the Robins in order was frowned upon, when knowing who Bruce Banner saved when he became the Hulk was laughable, and when knowing all of Spider-Man's love interests would you get you shot to death in a darkened alley (one of those was exaggeration).

It is with that knowledge that I make this statement: I think superheroes are becoming the new zombies.

"You gotta shoot them in the head-- oh."

What do I mean? Well zombies have been on the monster scene for a while, but never more popular than, say, a vampire or Frankenstein's Monster. Then, in the early 2000s, something flipped in the social conscience and zombies EXPLODED in popularity. They were everywhere: movies, TV, video games, books, shirts, guns, cars, cats, anything that could have "with zombies" added to it.

We've had zombie horror, comedy, romance, parody, and everything in between. We've seen fast zombies, slow zombies, dumb zombies, smart zombies, monster zombies, and zombies with emotions. Yet still movies like World War Z make a ton of money even though the genre should be played out.

I feel like I've been tired of zombies for a decade. It's worn out, cliche, and way past the point of stale. Superheroes are becoming more and more popular, and, much like a bite victim's husband, it's what I fear they are becoming. 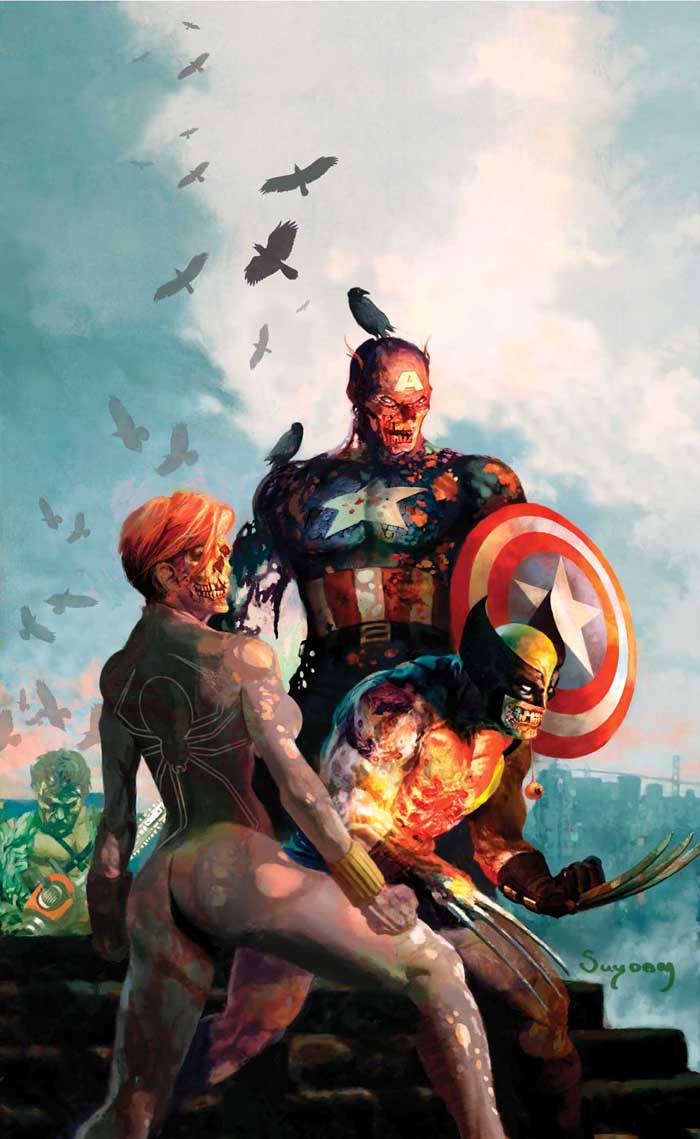 Superheroes are everywhere. The latest Saints Row video game had superpowers as a central plot. There are currently three superpower-centered TV shows on network television and only two of them have any foundation in comic books. I see superheroes in commercials, I see them on everyone's clothes, I see them in real life for Thor's sake.

Just as zombies overtook every facet of entertainment, so too are superheroes. Every character who's ever graced a comic book is getting a movie deal. Even Bloodshot! This year, we'll have Iron Man 3, The Wolverine, Man of Steel, Thor 2, and Kick-Ass 2. Next year will be more and still more the year after that. Cartoon Network has a whole programming block dedicated to DC and Disney has one for Marvel. Speaking of, Marvel is planning a whole slew of TV shows in addition to the one on ABC right now.

There comes a saturation point wherein superheroes become so common they transform into an annoyance. It's like this. You open your fridge and find your favorite candy. Then the next day you find two, then six, then most of fridge is filled with candy, and soon you can't close the door and die of Type II Diabetes.

What's worse is that the self-sustaining engine of commerce has already began rolling. Superheroes make TONS of cash. Avengers made a billion dollars in 19 days. Three of the top ten highest grossing movies of all time are comic book movies. Money people know how profitable it is to do a superhero and they do them hard.

I fear a day when we return to a time when comics aren't cool and we must discuss our hobby in secret. Where there'll be a superhero movie every other year and it'll most likey be like this.