"Misses the mark"
By: Jean Henegan | TV Reviews | April 28, 2016
If the Arrow writers were hoping to craft a loving tribute to the character of Laurel Lance with "Canary Cry," they missed the mark pretty spectacularly. If they were trying to put together a hour that packed in a lot of disjointed storytelling and swung through a gamut of emotions without really getting to the heart of any character grief (save for another spectacular performance from Paul Blackthorne as Captain Lance), then the writers nailed it. Because this was absolutely not an episode about Laurel and her legacy- no matter how many pretty speeches Oliver made. I do want to take a moment to single out Blackthorne's brilliant work over the past two episodes, before delving into the disappointing aspects of the episode. So often, Captain Lance is called on to be the killjoy. However, when Blackthorne is handed an emotionally compelling arc, be it Lance's alcoholism or losing one daughter after another, he absolutely steals the show. Frankly, I would have loved to have had an episode that simply focused on how each of the show's characters was dealing with their own personal grief. Heck, I would have taken an entire hour just spent with Captain Lance as he tries to process life without his rock, Laurel. That was the most compelling element of Laurel's death: how will her father deal with it? We don't need a rogue vigilante to prove that Laurel was a hero (or to tarnish her legacy so that Oliver can take steps to salvage it at the funeral). What we did need was time spent with these characters as they deal with this huge blow (and the show certainly wanted us to think it was a huge blow to the team based on their misguided "Laurel was a hero" arc). [caption id="attachment_82559" align="aligncenter" width="600"] 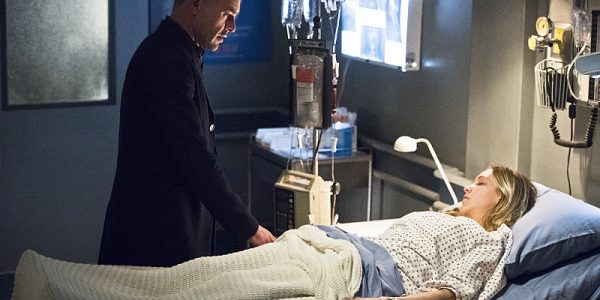 Arrow -- "Canary Cry" -- Pictured (L-R): Paul Blackthorne as Detective Quentin Lance and Katie Cassidy as Laurel Lance -- Photo: Dean Buscher/The CW -- © 2016 The CW Network, LLC. All Rights Reserved.[/caption] But, rather than get to see Oliver, Thea, Felicity, and the rest of the group deal with the pain they are experiencing, the writers decided creating a new Canary vigilante for the gang to stop was the better option. It was completely obvious from the episode's opening scene who was taking on the mantle of the Canary. (A strange woman conspicuously walks through the middle of a sequence that includes only core cast members? Yeah, she's going to be important later on.) And the throw away explanation for the character's motive- her parents were killed by Hive back during Darhk's gas chamber experiment- just didn't jibe for me. If we were supposed to care about this character (and it was clear that was the goal), we needed more than a single line of backstory. We needed to understand who she was before this and what it has done to her- in her own words, not through Felicity reciting her bio. Now, it's entirely possible that the imposter Canary will appear again and perhaps take up the mantle of the Canary permanently. And I would be ok with that happening down the road. But introducing her in this particular episode took the focus off of Laurel and put it squarely on Oliver and his amazing powers of persuasion.

The elements of the episode that worked the best were the ones that were truly Laurel-centric. While Laurel only really found her place in the show in her final episodes (acting as the voice of reason to Oliver), it was interesting to see her in flashbacks (the best use of flashbacks since season two, by the way) and realize how much she actually had grown from her early, non-vigilante years. The earnest Laurel who thought it would be simple to save the city would be unrecognizable to the battle-hardened Laurel who thought the city was still worth saving, was willing to run headlong into danger night in and night out, but who also realized that Team Arrow's actions might never be enough to stop the bloodshed and violence. That was the Laurel that should have been celebrated this episode, rather than having us spend the episode chasing a character pretending to be her. 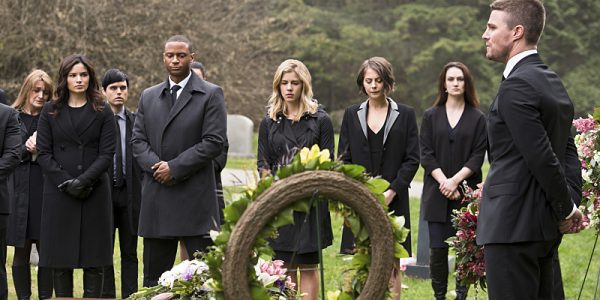 Arrow -- "Canary Cry" -- Pictured (L-R): Katrina Law as Nyssa al Ghul, David Ramsey as John Diggle, Emily Bett Rickards as Felicity Smoak, Willa Holland as Thea Queen and Stephen Amell as Oliver Queen -- Photo: Diyah Pera/The CW -- © 2016 The CW Network, LLC. All Rights Reserved.[/caption] Final Thoughts: -- Glad to see that Nyssa made it to the funeral. And even more glad to see Nyssa warning Lance that there is nothing he can do to bring Laurel back (although, perhaps Constantine could help). -- I love Alex Kingston (Dinah Lance) as an actress, but her American accent is particularly awful. I don't understand why they couldn't just let her use her natural English accent. -- Even though we've known about the Barry-Oliver graveside scene for months, it felt pretty out of place in the episode. -- I get that Diggle is angry at himself and feels a great deal of guilt (and, frankly, he should). But angry Diggle banging on cars was far less compelling than quietly resigned Diggle crying after banging on the car. I would like more of that Diggle in the future.
Rating
6.5
Pros