Asura’s Wrath is such an unusually unique experience I don’t know whether to call it more of a game or an interactive anime or even who to really recommend it to.

While that might sound negative I can certainly say it isn’t bad, far from it, there is action and presentation values at work in Asura’s Wrath that make games like God of War look positively restrained in comparison.  When you aren’t exploding planet sized bosses with a single punch you are throwing tank sized missiles at space craft or having a fight with a guy whose sword literally extends from one side of a planet to another after sending you flying off a moon. This is right before you have a relaxing chat with him while sitting in a hot spring that turns in to a mini game that I won’t spoil too much but it involves Sake and jiggle-physics and quite possibly one of the most funny quick time events I’ve ever seen in a game.

To say this is a very Japanese product would be a huge understatement. Asura borrows elements from seemingly all of developer CyberConnect2’s past titles and puts them in what can basically be called the closest thing to DragonBall Z; the video game, without it actually being related.  None of its various components are terrible but at the same time none stand out in any real way outside of as mentioned; the way they are presented.

You might just be pressing one button for light attacks and one button for heavy while occasionally dodging and hitting a quick time button prompt to counter but how all this looks so flashy and over the top even in its simplest form it’s still satisfying to play and certainly fun to watch if nothing else.

The most common form of actual gameplay is a mix of rail shooter sequences, very reminiscent of AfterBurner with their auto lock-on ranged combat and basic third person character action you would expect from a title like this.   Unfortunately because the game is so focussed on being as extremely cinematic (and thus very linear) as possible even the most gamey parts still don’t have any real player choice or options outside the order of the enemies you dispatch.

While playing through will unlock various gauges that add effects to the core gamplay - such as faster filling up of your Burst meter, which is the energy you build over a fight in order to activate the next cut-scene or sequence that progresses the action none of these actually alter what you’ll be doing.  Replay value outside of simply re-experiencing Asura’s Wrath is non-existent unless you are playing solely for achievements which isn’t not a reason to play a game but hardly one that will motivate most people to do so.  While it pains me to say so as much as I enjoyed my six or so hours of this crazy adventure I can’t see myself playing again until I would simply like to do so because I can. 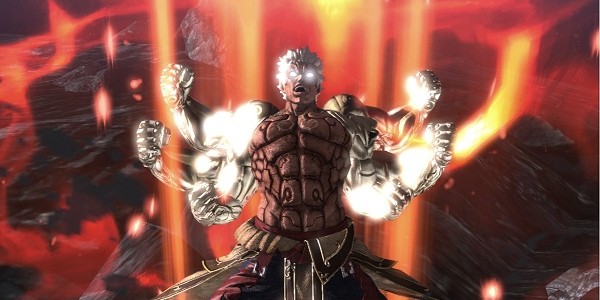 I’m always happy to play a game that strives to be different in its own way and Asura‘s Wrath definitely accomplishes this but for anyone who isn’t a huge fan of crazy over the top anime style action that is predominately un-interactive it’s a tough sell and such people would probably be smarter to rent or wait for a price drop.   A side note I'll make that anime fans in particular will be happy to know is that the game can be played in English or Japanese with both dubs having their pluses and minuses.

That said if you would like a comparison that is somewhat odd yet makes sense in this instance, think of this game more like a box set of anime that happens to be cheaper than a lot of anime box sets tend to be and it may let you view it as a better deal.  CyberConnect2 even went out of their way to structure Asura’s story like an anime series complete with “coming next” post episode completion videos so perhaps even they realized this.   Whatever you decide playing a game like Asura’s Wrath is something you won’t have done before so everyone should check it out eventually, just remember to apologise to your fingers when you’re done.