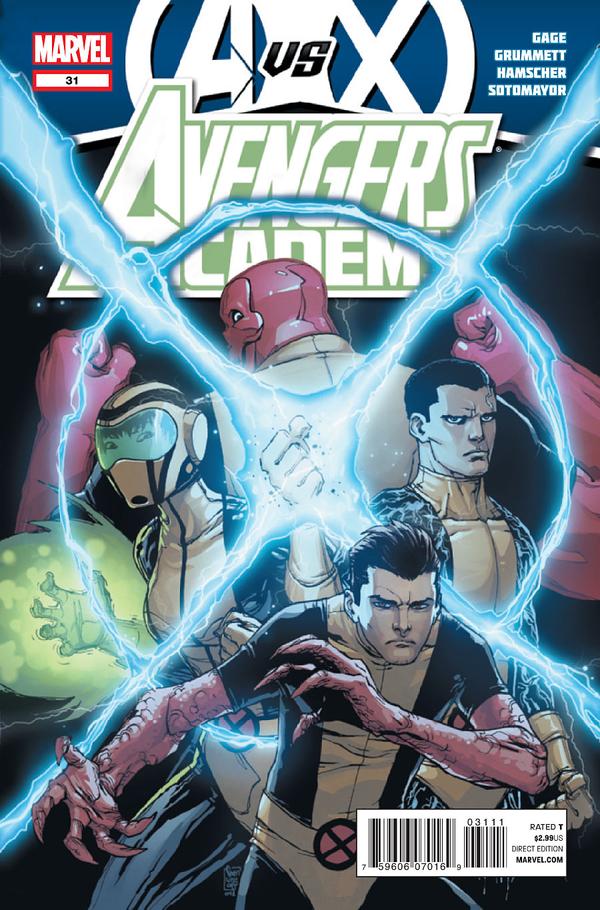 Before we get into the meat of the review, there's one thing you have to know - read this issue before you read any of the other Avengers vs X-Men issues this month. This one happens first chronologically. It's a real shame that Marvel has done such a bad job telling you which issues to read first in their opening intro page. The correct order for this week's issues is Avengers Academy, Uncanny X-Men, and then X-Men vs Avengers, although the last two have a bit of overlap.

This is the third entry in the Protective Services storyline which had all the minors from Utopia taken to Avengers Academy by Wolverine. Since the Schism was about minors being involved in fights, Wolverine wanted to remove them from the Avengers vs X-Men fight. The last two issues were decent. They had well-written parts and parts where it appeared they were trying a little too hard to make sure the kids were acting like kids and they came across perhaps a bit more as brats than they should have.

What I enjoyed most about this story arc was that the writers weren't afraid to have some nuance - some of the X-Men and Avengers got alone while others fought. It would be been very easy to make all the X-Men bristle at the idea of being kept at Avengers Academy. It also gave Christos Gage an opportunity to explore Laura's (X-23) mixed emotions about becoming an Avenger post-Schism. Unfortunately, even though this issue has her as one of the key characters in the resolution of the kid X-Men v kid Avengers, I felt Gage didn't have as much room to explore this idea as he would have been able to do if it weren't part of a massive crossover event.

This issue kicks off right where the previous one left off - Sebastian Shaw has escaped his imprisonement and appears to be on the verge of attacking the kids. Eventually, after some punching, people realize he's not the same old evil Shaw. I'm really curious where the Marvel Architects are going with this new Shaw who's a good guy because he can't remember his past. It's been handled a little awkwardly so far. Whether or not he becomes a bad guy, I'd love to see him unseat the dumb kids running the Hellfire Club.

While this issue is nothing special, it is some of the best writing in the Avengers vs X-Men (behind Wolverine and the X-Men and New Avengers). Gage gives a good mix of humor and drama. While I have found some of the kid's dialog and actions to be slightly off, it's no better or worse than the way young people are usually portrayed in comics. I don't normally give shoutouts to the colorists, but Chris Sotomayor does a great job here. It matches the tone really well and the nice clean colors really work. The difference in the tones from most of the book to the last page work really well.

If you've been reading the series - there's no reason not to pick this issue up. It wraps up nicely in a not-so-predictable way. You might see the ending coming, but the way they get there is pretty fun. If you haven't been reading, this issue is not a good jumping on point. Wait for the next issue.