Peter J Tomasi is writing the current run on Batman and Robin. He was not only the first creator I interviewed at Baltimore Comic-Con, but also the first creator I've ever interviewed. I was very pleasantly surprised to discover what a great personality all the creators at the show had. Peter was a blast to talk to - I could see myself spending hours talking to him about comics and he really seems to be relishing his time on Batman and Robin. I want to thank him again for taking time out of his busy schedule to talk to me. Without further ado, the interview: 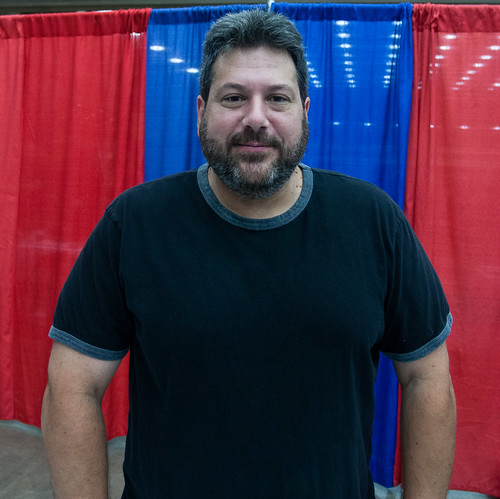 Me: I'm here with Peter J Tomasi the creator - I mean the writer of Batman and Robin.

Me: One of the things I've noticed with your run so far is that a really important theme seems to be maturity. Not just Damian's maturity, but Batman's finally kinda letting go of his parents - we saw that really early on when you had him celebrate their life as opposed to their death. Why do you think it took so long for Batman comics to get to that place?

PJT: To be honest with you, I'm not sure. I sort of looked at it as a natural progression especially with the New 52. It seemed like the first thing would be that building on all this death and all this foreboding darkness that has been part of his life - I was looking at the New 52 - especially now that he has a son - as something to let a little light in. So to me that's the way I'm sort of initiating that. To look at his parents' life not as this cloud constantly hanging over his head. It would be something now that he would actually celebrate - like you said - their lives and what it made him and allow him to do for Gotham.

Me: That's really good. It makes a lot of sense. One other thing I noticed is that except for your book and Batman Incorporated - Batman seems to be alone in the Bat Cave. What do you think about that and and making sure Damian is around and not having a really different feel for the different books?

PJT: Honestly, I think it really boiled down to certain writers just not really wanting to deal with Damian in a certain way because they had their own specific story line set up. And Damian seemed to have no part in it where Batman and Robin of course having Robin in the title was the key to make me ensure he was just as much the star as Batman. There wasn't really any sort of machinations behind the scenes to say 'hey keep Damian out of those books' - it was simply that certain writers had certain stories and when they saw that I had the main story aside from Grant - those were the two books to keep Damian in the spotlight.

Me: It's good that you mention Grant Morrison because that was going to be my next question. As Grant is pretty much the creator of Damian and writing the only other book that features Damian now - do you guys collaborate where Damian is in terms of maturity or because of the timelines you don't have to collaborate as much?

PJT: We haven't really had to collaborate as much. Grant was kind enough to suggest me to do Batman and Robin initially. I actually hired him when he first did Batman - I was the editor at that time. I convinced him for about an hour and a half to take on Batman because he was in the midst of All Star Superman and didn't know if he could take it on and I was like 'aw man, come on you can do Batman and Superman at the same time! At DC Comics. You gotta do it' And he agreed. But in regards to the other stuff, it was keeping in line with what we wanted to do. There would be emails exchanged and things like that, but there hasn't been a really close collaboration. Just a mutual appreciation society.

Me: So, I've really, really enjoyed the Battle of the Robins - pretty much your previous story arc. I think it's pretty interesting how he's attacked all the other Robins. But it really brings home the fact that Bruce has had a bunch of different kids, but they've all been adopted. This is his first real kid. How do you think that changes the dynamic between him and Dick or him and Todd vs him and Damian?

PJT: It's always an odd question. Because in a weird way - when someone says to me 'this is my adopted son' or 'this is my step-child' .... I mean they're part of your family. So I don't like to delineate that way. To me it seems like Batman obviously has a close relationship with all the past Robins. But there is a sense, I guess, because he's blood maybe there is that. Especially being a young age - there is that connection between father and son. It's weird I never looked at it like the [other Robins] were less special. He really looked at Dick and Tim, obviously, and even Jason, to a degree, as his sons. I think if I was writing, let's say, a 10 year old Dick Grayson I would still write it in much the same way whether he was blood or adopted.

Me: And do you have kids yourself? And, if you do, how does that affect the way Batman and Robin are interacting now?

PJT: Yeah, I do. I have a 10 year old boy. So it makes for a very fertile ground to draw from; to have a wacky 10 year old zipping around the house. I use our wonderful dynamic (chuckles) to sometimes play it out on the pages of Batman and Robin.  So it's a lot of fun.

Me: So you're saying he was also trained by ninjas?

PJT: He is, actually. And his sword-wielding is amazing. 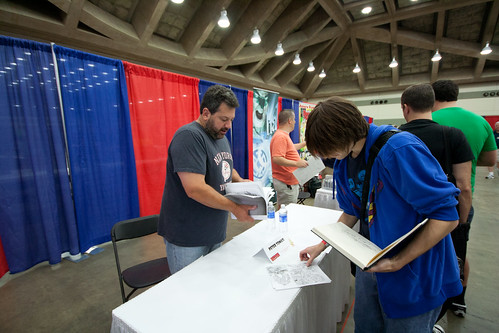 Me: I know this is a sensitive subject so I understand if you can't answer it. But in the Battle of the Robins I was really hoping that the punchline would be that one of the girl Robins would come and kick Damian's butt after he kicked all the guy Robins' butts. Do you know if they were still Robin in the New 52? Even if you can't use them right now because they're being reserved for another writer in the future. Stephanie Brown and Cassandra Cain - I don't know if you know or not - but were they still Robin?

PJT: Honestly, I don't know. I know it's been bandied about in the office, but I haven't been privy to the stuff regarding those characters so I'm not sure at this point.

Me: My last question is - do you have any teasers you can give for issue #0 which comes out this month?

PJT: I think it's next week from the date when we're talking today. It's a really cool look at what made Robin Robin. I've been playing up the father/son dynamic. Now in the 0 issue I get to play out the mother/son dynamic. So you can see where Robin was truly formed in the beginning and what made him who he is today. And what Batman has obviously tried to chip away at. So the 0 issue is focused pretty much on Damian and people will really enjoy the relationship between him and Talia.

Me: I'm really interested to see how you write Talia given Morrison just wrote her a few months ago and gave us a look at her young life. And it'll be interesting to see how you play out the mother/son dynamic.

PJT: I'm looking forward to getting it into readers' hands. I wrote Talia a little bit back in Nightwing when I did that a couple years back. I like Talia - Talia's a great character. I think people will enjoy what I do with her in 0.

Me: Thank you very much for taking the time to talk with me.