As the enormous wake of The Avengers subsides (however gradually) Warner Bros. has wasted no time in ramping up The Dark Knight Rises marketing campaign with posters, banners, trailers and most recently, four TV spots that have also debuted online.

We’ve got four – count `em: one, two, three, four – 30-second spots that have gradually debuted over the week and all of them contain new footage and a cornucopia of hints at what may transpire in Christopher Nolan’s conclusion to the Batman legend. 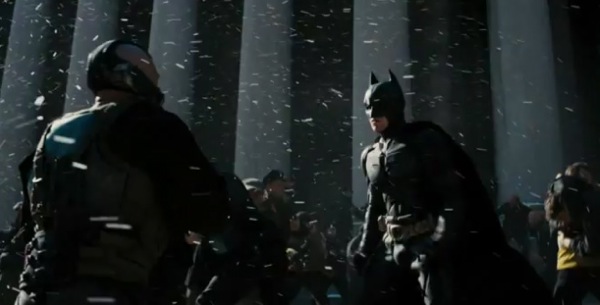 First off is a more-or-less straightforward, fairly indistinct ad which provides the overt “hint” that, yes Batman has been “out of the game” and needs a bit of a helping hand getting back into his League of Shadows-era buffness. We do get a new badass Bane quote to add to the log: “Gotham, this is your liberation” which is an interesting contrast to his line from the trailer: “I am ’s reckoning.” Perhaps, he sees no distinction.

We could call this next spot the villain highlight, though it still remains to be seen if Catwoman will be a villain, heroine or both. Hell, it’s more likely she is simply an opportunist (with a bit of a conscience) who does things strictly because of her own interests.  Nevertheless, she gets her spotlight (compete with a “cat burglar” nod for all Easter egg hungry nerds) opposite the hulking Bane (who according to Alfred was “born and raised in hell on earth). Sounds like a cheerful fellow.

Credit consideration: around the 0:28 point of the clip (during the credit page) we can see in the background a burning Gotham City compete with what appears to be military helicopters responding to the devastation. Ever second counts! 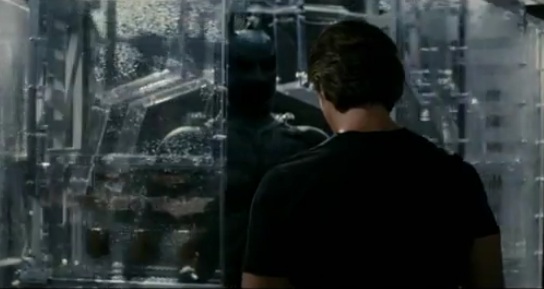 And so brews the storm. Similar in eerie stillness to the latest trailer which debuted with The Avengers, this third peak is bleak and foreboding. Instead of the “returning to the mantle” angle, we have Alfred essentially pleading to Bruce to stay in retirement; warning him that he is no longer Batman and that it should probably stay that way.

At 0:14 we get a Bruce Wayne howling in agony, who appears to be hanging from a rope of some sort, followed immediately by Bane tossing aside the shattered remnants of Batman’s mask. Based on the plot of the Knightfall story line from which this film drew inspiration and writer David S. Goyer’s recent remarks that the final scene in the film left him with a knot in his throat, it is becoming more and more likely that Bane may literally break the bat.

Last, but certainly not least, we get perhaps the most revealing of all the spots (regarding the ratio of new footage that it), brief hints at the chronology of the film and what appears to be an official character reveal (albeit a darkly lit, fleeting one) all in an adrenaline-pumping package.

Lucius Fox gets some face time as we begin, with the master inventor reminiscing about the good ol’ days when his conversations with Mr. Wayne “would end with a bizarre request” and proceeded to show him The Bat (Batman’s future flying machine) for “old time’s sake.” The interesting part of this segment is how at 0:11, we can see Wayne walking with a cane, presumably from injuries sustained when tumbling off the building with Two Face in The Dark Knight.

In addition, at 0:22 we get the ol’ softy (Bruce, not Bane) sharing a smooch with a female who does not appear to be Juno Temple’s character, who does not to be Anne Hathaway’s Selina Kyle but rather Marion Cotillard’s Miranda Tate. So either all that talk from Cotillard swearing her character was a good guy is in fact true, or the devious Talia Al Ghul is getting in close with her prey.

Each of these spots has its unique tone, all while conveying the end of dynasty and the fall of a legend. Things are only starting to heat up but I can tell you this: if I’m going to be continually bombarded with footage like this for the next few months, I don’t think I’ll make it to July 20.