Scott Snyder promised us a terrifying Joker and he has delivered.  This issue picks up where the last one left off.  Joker has Batman tied up on a bridge and is taunting Batman and his allies.  There’s been a lot of talk over the decades among the fans and even some Batman writers about the relationship between Batman and Joker.  Snyder really plays with that a lot in this issue.  We already know he has a Joker/King relationship between Joker and Batman, but in the opening pages Snyder plays up the semi-erotic dialog between the two.  And the closing monologue really cements it.

A lot of the New 52 Batman stories have revolved around little details from the past that have come back to haunt the Bat-family.  That continues in this issue as the Joker plays up a secret he knows Batman has been keeping from the family.  After Batman reveals the secret I felt the same way as I did with the big secret in the Court of Owls arc.  The way Snyder has written it you’re left unsure of whether to believe Batman or the opposite of his conclusion.  Sure, he’s the greatest detective, but he was wrong about the Court of Owls.  (Which was Snyder’s genius in presenting that arc first.  It really throws everything about Batman’s skills into question)

The backup story has Joker recruiting yet another Batman villain to the party he’s planning for Batman.  This time it’s the Riddler.  The most exciting thing about seeing the Riddler in the backup is that we know he will be the main villain in the next Batman arc.  So, even though it was co-written with James Tynion IV, I like the preview of what we can expect with Mr Nygma.  Also, I love how Joker is treating him in this issue and how he treated Penguin in the previous issue.  It’s the complete opposite of the 1963 Batman movie.  He’s willing to throw them under the bus if they don’t cooperate and is a real jerk about nearly everything with those two.

The art is amazing on both stories.  We have Greg Capullo on the main story kicking butt as usual!  Unlike some of the other Bat-artists, he does a great job depicting the age differences in the former Robins.  On the backup we have the amazing Jock, who Snyder worked with in his previous run on Detective Comics.

You really need to be reading this book!  If you missed the last issue and can’t find a physical copy, make sure you buy one digitally on ComiXology.  (It’ll be a dollar cheaper anyway since you waited a month). 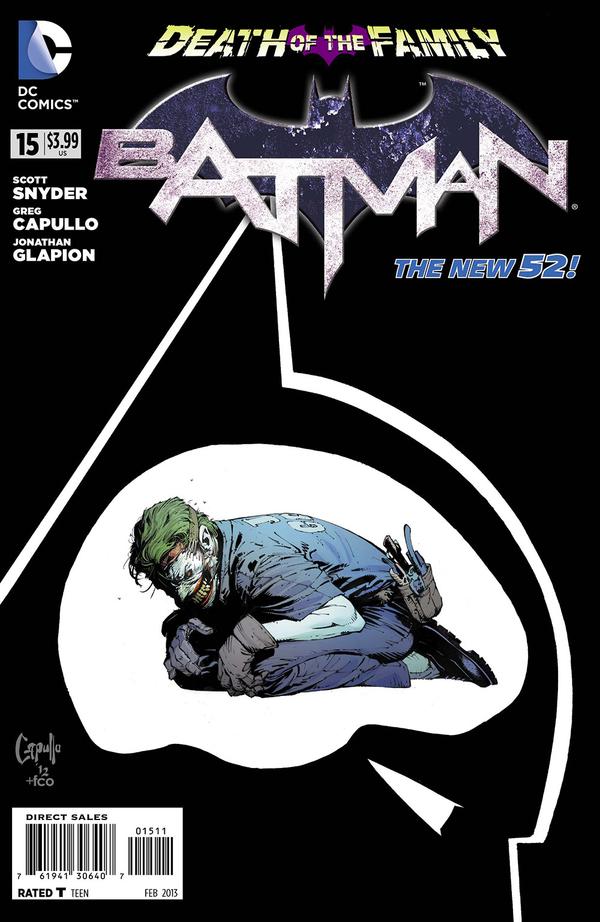