Beholder by Siberia-based Warm Lamp Studios is yet another game claiming every in-game choice has consequences. A game set in a world controlled by a totalitarian government means that consequence is generally death. Your position as a state-installed apartment manager offers little protection, from both the government and the inhabitants you've been tasked to spy on. So how will you balance your responsibilities? As a husband and father, you also have a family to protect. However, in protecting them, will you also protect your inhabitants or the state? Of course there is a third option: simply protecting yourself. [embed]https://www.youtube.com/watch?v=BUSzOJKegjc[/embed]

The government instates you as an apartment manager in order to spy on tenants. You can install cameras in their apartments, peep through keyholes, and snoop through their belongings to gather information. This information can either be used for a tenant profile, or to report them for a crime. If reported for a crime, the police will violently drag the tenant away. Do you want to be responsible for such violence? If not, there are other ways to complete government missions. However, taking an alternate path means opening yourself to alternate risks. You must place your trust wisely. While the person you're helping might be kind, the person you have to go through to help that person might be your murderer. 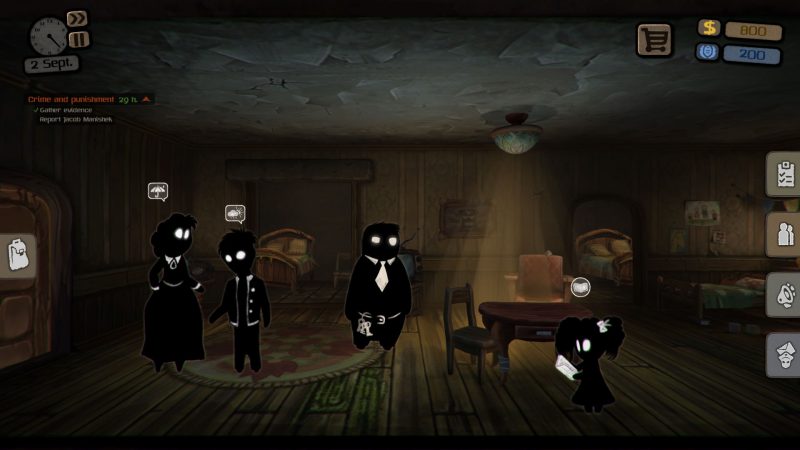 Not only do you have to think about your tenants, but you also have to think about your family. You are married with two children, little girl and a son in university. You must pay for food, utility bills, as well as other unexpected costs that can be a matter of life and death for your family. It doesn't take long for the costs to rack up either, meaning you constantly need money and sometimes you need it fast. Each mission in the game has a time limit, and if you don't complete the mission in that time limit... Consequences, remember?

Time Stops for No One

Beholder has an in-game clock, which you can pause or fast-forward. Tenants will leave the apartment complex at certain times during the day. Your family will sleep at night. You never have to sleep thanks to the government altering your DNA. This also means time matters in this game. Overall the system works pretty well, and adds to the intensity of the world. You might have to wait for a tenant to go off to work and bring something back before you can complete a mission. However, waiting means putting off making money, which might leave you unable to pay for your family's food.  It might be quicker to break into a tenants apartment, steal their belongings, and sell them to the merchant. 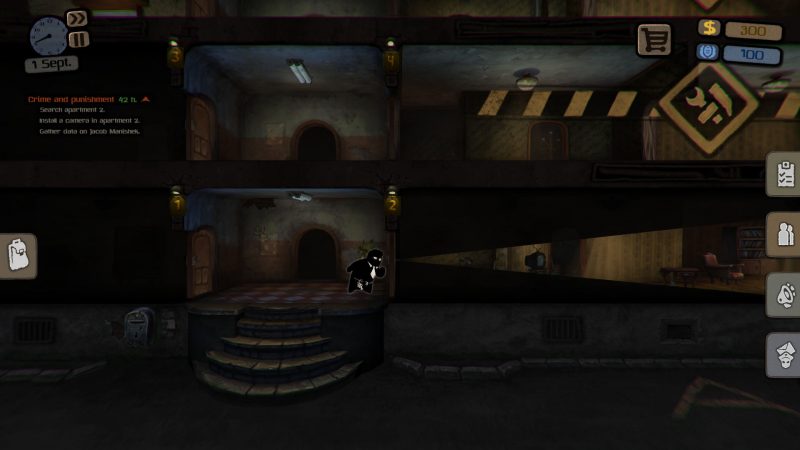 There are times when waiting gets annoying, because you might have nothing to do in the meantime. Of course you can fast-forward time, but sometimes you don't want to in case you miss something. The game has a way of making you paranoid, which is good, but frustrating at times. There's no way to know how the mission might play out when a sketchy tenant gets involved. If they decide to kill you, you have to start the game all over again. So yes, multiple endings, but this means having to replay the same missions over and over again. Luckily the game moves rather quickly, and gives you the option to skip the tutorial in the beginning. However, sometimes you wish you could just go back to the point before you made that stupid decision that got you killed, especially after putting in +4 hours.

The entire game takes place in the apartment building, which include seven apartments, a kitchen, and laundry room. The environment appears to be relatively simple, as do the characters. They resemble Limbo-esque figures, black shadowy bodies with white eyes, but each character has their own individual traits and secrets. The simple art style of the game hides the complexities underneath it. You never know what your going to find in your neighbors desk, or what or your other neighbor's husband might say when asked for a book. The game's mellow atmospheric soundtrack also hides the violence that's only a phone call to the bureau away. 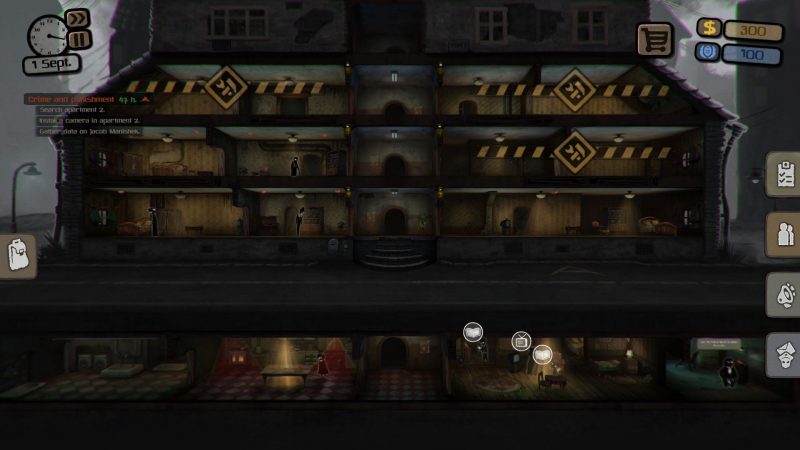 In conclusion, Beholder is a game about more than consequences. It's a game about surviving under constant surveillance. It can feel slow at times, sometimes leaving you with nothing to do. However, that time gives you space to think about what you're doing. Are you helping tenants out of the goodness of your heart? Or are you hoping that somewhere down the line they repay your kindness? This is a game where making the best of a situation might mean hurting someone else in the process, including your family. For anyone who enjoyed Papers, Please, I highly suggest checking this game out. Beholder is available now on Steam for Mac and PC.
Rating
8.5
Pros