Generally speaking, pop culture in the 1980s was the best of times and the worst of times. For every Back to the Future, Cheers and "Purple Rain," there was a Xanadu, Joanie Loves Chachi and "Rock Me Amadeus." Yet, there's something oddly compelling about the decade's horrible fashion, bizarre and dated trends, and more than anything, its music, which has lived on perhaps more than anyone ever would have—or should have—expected.

Rock of Ages, which hits theaters this weekend, is a testament to that. The musical starring Tom Cruise, Alec Baldwin, and Julianne Hough features about two-dozen classic '80s tunes including "We're Not Gonna Take It," "Here I Go Again," and "The Final Countdown." That got us thinking about some of moviedom's most memorable musical scenes featuring these bodacious jams. No Lloyd Doblers on this list; we were searching for rock, and rock is what we found. 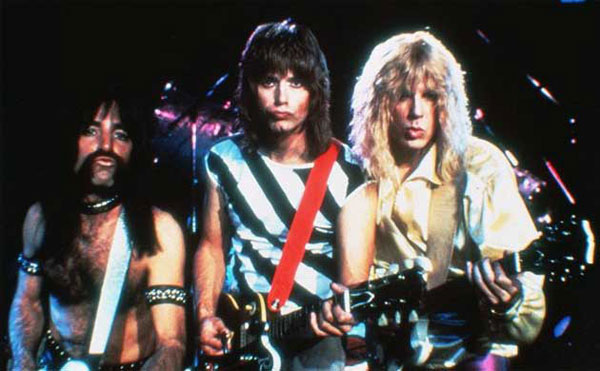 
"Eye of the Tiger" by Survivor - Rocky III

The song is synonymous with both the '80s and boxing thanks to Sly Stallone and company. What else needs to be said?


"We Built This City" by Starship - The Muppets

A more recent entry on this list, We Built This City is an objectively terrible song that's grown into a beloved camp classic. The Muppets, apparently, agree. It was their go-to song when they needed some inspiration to clean up their woebegone studio last fall. Want a taste? Check out their We Built This City music video:

You might not be as familiar with this song as the others, but Rob Reiner's This Is Spinal Tap is the definitive '80s rock movie. It's packed with classic tunes, it's been super influential for the likes of Christopher Guest and other "mockumentarians" and it's hilarious to boot. Stonehenge earns a spot on the list because it's the titular band's "Bohemian Rhapsody," except with more dancing little people. Check it out: