Fact: every Batman cartoon is good. Obviously, Batman The Animated Series is one of the best cartoons, superhero or otherwise, ever (maybe hyperbole? probably not). Batman Beyond introduced a cool future universe that's lived on past the series to grow bigger (Young Justice was really Justice League Beyond/awesome) and more dynamic all the time (Batman Beyond is one of the biggest parts of the DC Digital Comics line). Batman the Brave and the Bold was a total 360 from either of those shows, but ended up being sheer silver age wackiness in a bite-sized format; featuring team-ups with JLA/JSA/DC random heroes instead of Robins or Nightwings. If you've never heard the musical episode where Neil Patrick Harris stars as the Music Meister, listen to it right now.

So the newest Batman show, Beware the Batman (simulcasted on Cartoon Network and The CW) is also good. Well, it’s fine, but also only a few weeks old. Albeit, it's not great like BTAS; the universe isn't as cool as Batman Beyond, and it's not as funny as Brave and the Bold. But it has elements in place to become really awesome, and totally different, from those other shows. Plus, this week's "Family," has a reveal that fixes a big problem that should help the show hit its stride. And here’s good news, there's one thing Beware the Batman does better than any of it's cartoon-series predecessors: fight scenes! fight scenes! fight scenes!

“Family” starts with a ninja fight: Batman and his bodyguard Katana, a lady who uses a…katana (duh) v. a masked-monkey samurai and a bunch of ninjas. The CGI animation favors fight scenes - the action is crisp and the characters have a lot of motion and reaction. The fights kinda look like cut scenes in video games and you can tell these scenes are where most of the show's budget goes. Beware the Batman certainly earns it's TV-PG (V) rating; it’s got lots of violence that'd be fun to re-create with action figures.

But this is a double-edged katana, perhaps because CGI has the weird effect of making everything always look like toys. The animation works for fights, but not much else. During the frequent exposition scenes of dramatic secrets it always feels super-corny. Perhaps a 10-year-old boy wouldn’t think it’s hokey, but these scenes really remind you that the show's target audience is 10-year-old boys. Corny isn’t all bad though -Adam West's Batman is corny (as well as goofy, surreal, bizarre, and beautiful) and it's one of the best TV shows ever made (when it comes to Batman, I'm prone to hyperbole). But make no mistake, Beware the Batman is a kids' show. It may be best watched "not sober."

The villains on Beware the Batman are also corny in a Adam West way. Remember that monkey samurai warrior I mentioned earlier? His boss is Lady Shiva, the leader of the League of Assassins who dresses like an Indian goddess. There’s, Anarky! A hooded lunatic with an Anarchy A on his chest, who fights for ideal chaos (I love him). Humpty Dumpty, a freakish egg man inspired by the “literal” egg-man who fell and cracked (best of all, he's voiced by Badger from Breaking Bad!). Mr. Pyg and Toad are Grant Morrison's creations, proving the show will make hyper-specific comic references. And even DC classic Metamorpho, the shapeshifting chemical freak, is here. Every villain is great because every villain is weird. Also, it means we’re going to see some strange action figures in the future. 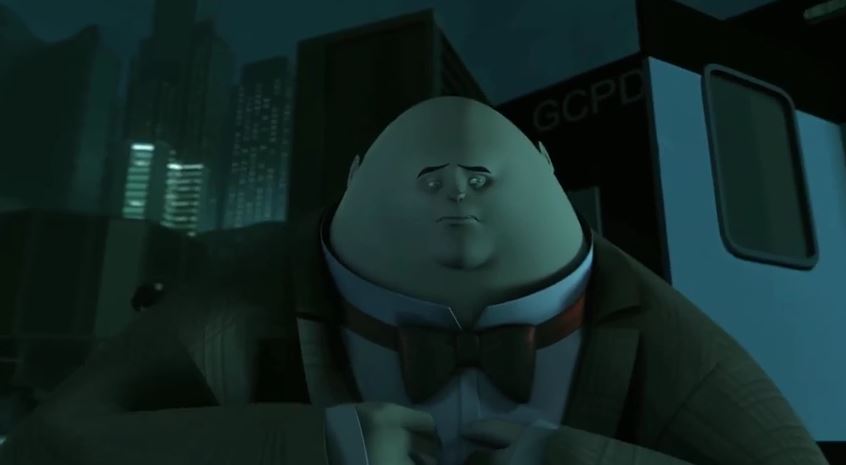 Sidekicks are an essential ingredient for a successful Batman recipe, yes? And this is where Beware the Batman excels. It takes a totally unconventional look at the Bat-family structure. It's weird to acknowledge, but Alfred is undoubtedly the show's best character. He's a former MI-5 spy, a total badass, and very wise. He's not Bruce's servant; he's more of Bruce's sergeant father. I think this is adapted from Geoff John's Batman Earth 1 (but I haven't read that yet). Whatever the case, Alfred's presence allows the show to get stealthy, or be a detective drama, or even just have cool crime fighting gear. Batman has another sidekick, Katana, a ninja who uses a…katana (duh). Katana is a brand new character in the DC Universe. She's a member of the Justice League of America and her solo comic book came out in Februrary. The show alluded to her true role all season: being a Robin. Though it’s obvious this would happen since episode one, when Katana found the Bat Cave, "Family" finally lets Katana know Bruce is Batman. Now we have a cool crime-fighting trifecta that's never been seen in comic books or video games. "Family" is as good a jumping in point as any.

Here’s a little plot before you go so you don’t get confused (a lot of the episode references things that happened earlier in the season). Bruce gets pestered to join The Artist Club, a club for high class folk. The president of the club seduces Bruce and tricks him into coming to the club’s lair, which turns out to be the lair of The League of Assassins! The League wants the green sword Katana has been hiding all season. By using Bruce as ransom, Katana is forced to relinquish the magic sword to the League (lead by Lady Shiva) and reveals it’s the legendary Soul Sucker Sword, a sword that...sucks souls (duh). Our heroes save the day (duh, but watch to see how), except now Lady Shiva has the powerful sword in her possession!

By now, you know enough to decide whether or not you want to watch Beware the Batman (and I hope you do!). I have other problems, as well as affections, with the show that I’ll mention in the coming weeks. We only have four episodes left this season, but they should be better than the ones before it! Join me and see if there’s any reason to actually beware the new Batman.