Batman recovers this week from last Saturday’s blunders by showcasing the show’s two best villains. We also find out the meaning of the episode’s ominous title: who sacrifices what? Will there be a final reveal that changes the series status-quo? (Answer: yep.)

First though: Anarky is back! Anarky is by far my favorite villain in Beware the Batman since he is ridiclious and insane. He’s billed as the show’s head villain, therefore making him the Joker of the BtB universe. However, unlike the Joker, Anarky is not scary or ruthless. Hope, he’s just weird. He loves chaos (who doesn’t!) and all of his schemes are basically in pursuit of “fucking shit up” (can I say that in a kid’s show review?). The cold open begins with Anarky beating up dock guards and stealing something...but what?! 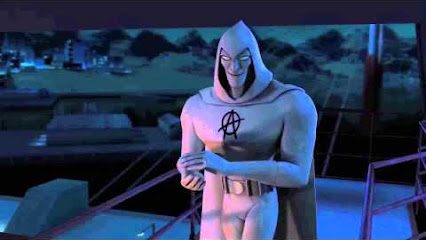 Then, we see Batman and Katana on the hunt for the League of Assassins. This is pretty interesting, though exactly what Batman and Katana do every week--because every week, the League tries to take over the world! Narf! We’ll never to get any Breaking Bad levels of characterization and plotting out of this series. The show is formulaic and predictable by design: it targets children hoping to sell action figures. However, if we can get some good fight scenes, funny villains - they can’t be actually scary or shocking, at most menacing or spooky - and interesting Batman problem solving, then we have a successful episode. After the Anarky fight, and the Batman/Katana goon beat-um-up, we’re given two scenes of BtB goodness. All aboard the train for success!

As it turns out, Anarky stole something very important to Lady Shiva. He ransoms it from her and demands she do some stealing of her own: he wants some chemical weapons from a secret lab. This episode (unintentionally) brings up a good question about biological weapons: why do they exist? I’m not talking chemical weapons, like Agent Orange (albeit, still bad), I’m talking about man-made viruses that could kill large portions of the global population. Why manufacture that? Doesn’t it almost certainly allow one person the power to wreak unimaginable havoc across the world? Yes. Yes, it does. If a crazy man with a white cloak and anarchy-A symbol ever get ahold of this stuff, we’re all screwed, and it’s our own fault! I warned you! I'll say, "You should have been reading my cartoon reviews! You would have known, like I did!"

But I digress. Lady Shiva agrees to steal the viruses, but it’s all a set up! Anarky gets Batman/Katana to fight Lady Shiva. Shiva and her ninjas manage to almost-escape, but instead let off a biological toxin that turns the ninjas into hulking Solomon Grundy-esque monsters. So not only does this episode have the series’ two best villains, it also has ninja hulk zombies. Wow. This is basic cable?

Batman tries to save Shiva, and though she tags along, she just stirs up trouble. Batman and Katana must escape before the virus kills all of Gotham - and now before the Mayor’s office burns down the facility with Batman still inside it! Comissioner Gordon gets a subplot that raises the states to cartoonishly dangerous levels. This is, of course, because we're watching a cartoon; however, when the stakes get this high it’s rather reminiscent of the live action Adam West Batman. Then Katana decides to sacrifice herself in order to save Gotham. Batman won't let her. Lady Shiva's escaped! The building is about to explode! Will Batman save his sidekick, avoid the explosion, and foil Anarky’s plans of distruction?

What do you think? Anyway, here’s a spoiler that’s an interesting development to the series as a whole: Anarky stole Ra Al Ghul from Lady Shiva. This is the first appearance of a major Batman villain in the show. So, if Anarky is the show’s Joker, Lady Shiva is the show’s Talia. She wants power all vested in the hands of an ancient cult leader who always escapes death. The League of Assassins turns out to be entirely Ra Al Ghul’s doing the whole time! Also, Ghul looks pretty spooky in his picture--a mix between skeleton and zombie. This is not what he looks like, but a cool picture none the less.

Will the introduction of a famous Batman villain make this show better (even though it’s already okay)? Will Ra Al Ghul even make his appearance in this season, as it is almost over? Is Katana going to start using her katana more? Find out next week, same Bat-Reviews, same Bat-Website.