They always say coaches are harder on athletes they favor--the athletes that show potential to truly be a star and need that extra push. If that’s the case, I fear I have to be extra hard on BH90210, since I was a die-hard fan of the original.

The good news is it has potential because it has most of the original cast. And you can’t deny that they enjoy being back.

The bad news: the show is a complex mess right now. But it can be better. 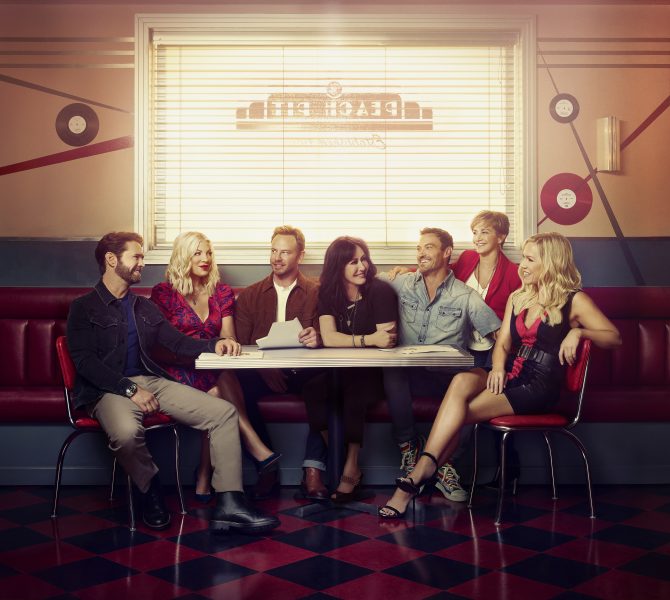 The 90210 reboot (and it’s not technically a reboot since the characters aren’t back as themselves, but instead as adult actors who are reminiscing about their characters) is an enjoyable trip down memory lane that is part nostalgia, part (attempted) new drama, and part metafiction (or creative, reflective thinking about the past). Just when a firm tone seems to be established, a mini-earthquake hits and the tone shifts, and it creates a clumsy effect.

In the pilot, the “actors” (with created, fictional lives and traits that are partly based on their own personality traits, but mostly made up) all head to Las Vegas for a “reunion” of the show, all of them showing the typical dread we’d expect from "teen" actors who are never quite able to get out of their type-casted iconic personas.

When Jennie Garth tries to check-in and is asked for her identification and she points to a poster with her own picture on it, the clerk mentions how old she looks now, causing her to whisper to Tori Spelling, “I’m going to kill this place on Tripadvisor.”

But at the lobby of the convention center, we see the first of the many awkward reunions of the cast, who often go from uncomfortable to nostalgically sentimental to playfully arguing to...well, turning into their characters despite not wanting to. Or maybe they do.

And maybe that’s the point. At what point do the 90210 personas end and these “invented” real actors’ lives begin? The show may have been able to truly scratch beneath the surface of teen fandom and fame and the difficulty of being on a hit show for a decade--but they never quite go there. They play it off and make it one big joke with the audience. 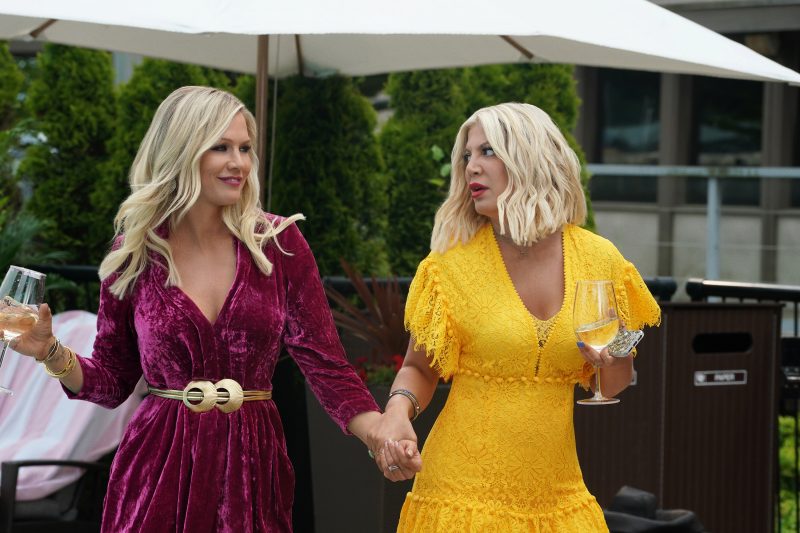 The invented lives of the “actors” are shown to be flawed or at least complicated: Jennie Garth is going through failed marriage #3. Jason Priestley succumbs to rage on set as a director and is so moody that his wife and publicist has to remind him of how to act to win back fans and attention. Tori Spelling is broke because she has a large family and a husband who refuses to take a job. Brian Austin Green lives under the shadow of a Beyonce-type wife who wins awards, but keeps him at home where his own life and dreams are suppressed. Ian Ziering seemingly has a perfect wife who is auditioning for “Real Housewives…” only to later discover that she’s cheating on him. And Gabrielle Carteris is a new grandma who is the president of an acting guild, but is potentially attracted to a woman, and that moment makes her reflective and unsure of everything she previously knew about life.

It seems somewhat obvious where this is going. In a no-place-like-home sense, these “actors” need each other. For despite their own flaws, their spouses or significant others are equally flawed, more unlikable, or so underdeveloped we don’t really know what to think about them. This seems to be an intentional trope, but we will have to see how much these other “characters” will feature in episodes 2-6.

But for most of the audience, they probably couldn’t care less. They didn’t tune in for newcomers, after all.

The original 90210 cast kicks off their arrival in Vegas with a “panel discussion” reminiscent of any fan TV panel you’d see in Los Angeles or New York. After snarkily agreeing that at least Shannen (Doherty) isn’t there, of course they are surprised by a live screenshot of Shannen saving animals in the wilderness somewhere. Yes, Shannen’s back. And as always, she steals the oohs and ahs from the “audience” in the panel. Brenda always could steal a scene.

Afterwards, as the rest of the cast cavorts in Vegas, Jennie and Jason (bickering throughout the show) meet at the bar, which leads to them hooking up in a hotel room, Brian and Tori banter like they’re old friends (which they are) before Tori admits she’s broke and gets frustrated she’s not earning a single cent from this reunion, Gabrielle meets a fan and shares a same-sex kiss that could lead to something else if she isn’t intrrupted by the sound of the alarm that goes off when Tori breaks a display case to steal Donna’s old prom dress. The gang escapes via plane, but is arrested for taking stolen property across state lines. Of course, this new found notoriety creates more popularity for the “actors” anyway, so it becomes a win-win. 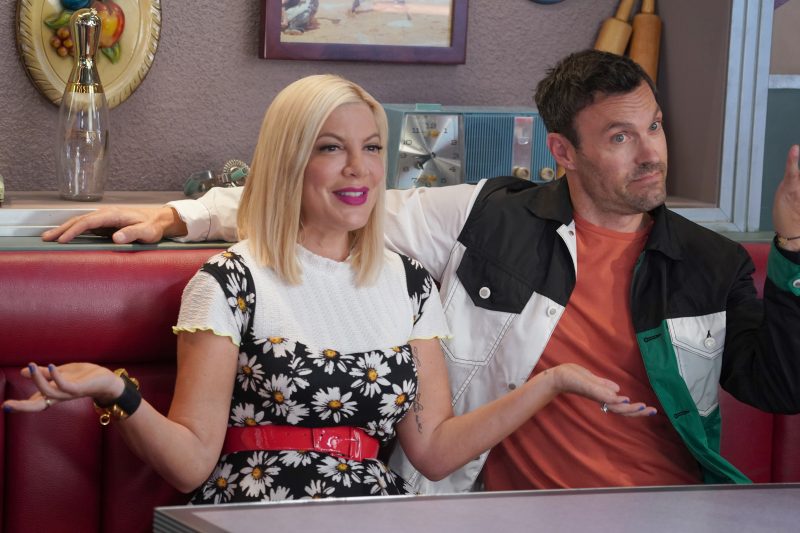 So, when Jennie and Jason have a one-night stand and Gabrielle shares an intimate kiss with a stranger and Ian’s wife accidentally dials him while cheating on him… we don’t really care much. After all, we want the actors themselves to mimic their past characters and hook up. Gabrielle is fantastic. Tori Spelling can act better than ever in her scenes with Brian. And years of Sharknado haven’t hurt Ian’s acting skills either. They’re fun to watch, whether trying to avoid their old selves or become their old selves.

Still, it creates an odd tone to the show. Soap opera-like teen characters kissing is one thing, but when adults playing versions of themselves (even with fictional spouses) start immediately cheating… it seems a bit off.  I guess we don’t really care about the fictional spouses anyway, but did they have to make everyone so unlikable?

That’s not the only tonal problem: it’s not really clear how much they’re seriously critiquing their former show. Jennie Garth laments seriously that people see her as “Kelly Taylor” and it’s reinforced later in the show when she flirts aggressively with a man in a pool until he calls her “Kelly” instead of “Jennie.” Are we supposed to laugh? Cringe? It’s not really clear.

Some of this is likely to be fixed in episode 2, where the actual plot of this limited series gets going. That is when Spelling’s idea of “let’s watch the show and have a show about watching the show” really kicks in.

There are some fitting tributes along the way. While the final scene will pack more of an emotional punch if you watch it yourself, there are a few other quieter moments that I found more satisfying. Yes, life is fleeting. The “actors” know that and quietly pay tribute to Luke Perry in a few different ways. So maybe that was the most important tone to get right.

With so many shows returning to TV, why not 90210? That’s not a ringing endorsement, but I have a feeling for the show’s fans, it doesn’t matter. And when Tori Spelling chimes in “Maybe going back is just what we all need...to go forward”  at the end, we all still nervously agree. But we’re crossing our fingers that the show’s tone can land in the right zip code.

Next week in Episode 2: Christine Elise (Emily Valentine!) joins the cast as their network supervisor as they try to “reboot” their show. That should create some extra drama and a lot of fun!